Hey y'all! I'm back in the swing of things…though I'm not sure I'm completely ready yet. I have a butt-ton (actual measurement) of students and life is well…hectic. That's OK though, I'll live. In terms of weight, I'm hovering around the same I have been. I am up and down depending on what's going on during the week. I've had a decent bounce back from my beach trip a few weeks ago and with school back in, my routine is leveling out a bit. I'm feeling OK about where I'm at on the scale. I've really come a long way in berating myself all the time. I'm a healthy person who works out several days a week and is conscious of what I'm eating at least 75% of the time. I can't do anything about the stubbornness of my metabolism, so, why make myself feel like crap all the time? Having said that, I still have a small weight loss goal for the Fall. I'm keeping it small because this is a difficult time of year to keep weight off, but I'm confident in my ability to keep myself in line. 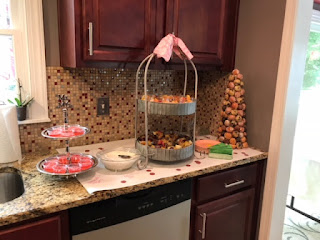 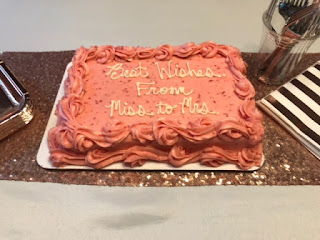 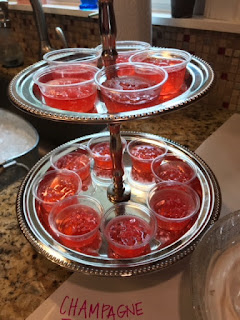 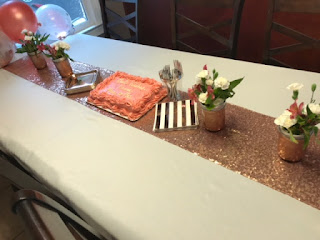 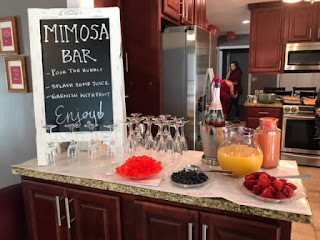 It's an exciting time! Football is back! Roll Tide! My book is a little over 8 weeks away from being released (November 2nd) and my brother is getting married in October! Not to mention the fact that the most wonderful holiday of all is just around the corner (Halloween). My mom and I threw a bridal shower for my brother's fiancé, Lisa a couple weeks ago and it turned out really great. I included some pictures above. My mom and I worked really hard to make it cute. I think we did a pretty good job. We can officially say that the wedding is next month now so there are a lot of fun times ahead. 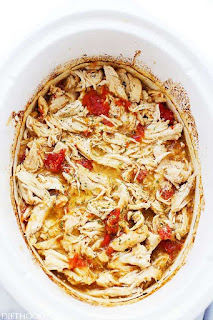 So, I guess I could share some food since it's a food blog. My phone started acting up awhile back and I had to get a replacement. Even though I backed up my phone on the cloud, some of my photos were lost. Because of that, I'm having to use a photo from Pinterest. That's fine because I got the recipe from there and because it's a better photo than mine was anyway. I made salsa verde chicken in the crock pot. It really doesn't get much easier (or healthier) than this dish. We threw chicken breasts into the bottom of the crock pot and then topped with fresh tomatoes, onions and a jar of store bought salsa verde. After it's been going on low for around five hours, you just take a couple forks and shred the chicken. This is a zero point recipe on Weight Watchers but don't let that scare you…it's DELICIOUS! Ian fattened it up a bit with sour cream and corn chips but I just ate it straight out of the bowl and I was satisfied. I definitely think we will make this again. Next time I may serve it over beans. It may end up being a Fall staple for us. 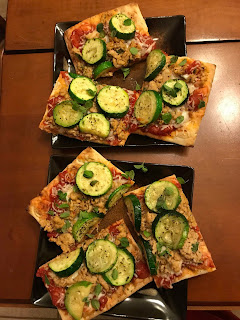 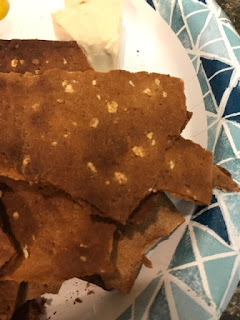 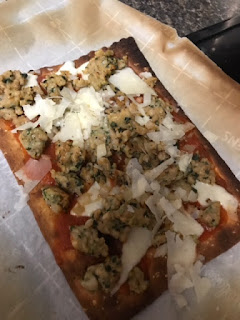 I grabbed some of those high fiber, low calorie flatbreads at the store and made a few different things with those. The first picture is from the Internet because my photo got lost, but essentially, I just toasted the flatbread in the oven, then topped with pizza sauce, chunks of chicken breasts, zucchini and cheese and put it back in the oven to get warm. Shout out to my friend Erin for the chicken/zucchini combo idea. I also made chips from the flatbread by simply broiling both sides. Then, I smeared smoked gouda Laughing Cow cheese on them to add some flavor. It was a tasty, easy, low calorie snack. Finally, for another flat bread, I sautéed some chicken sausage and then added that, pizza sauce and of course, a little cheese and made a tiny, but satisfying pizza. I think this one was my favorite because I LOVE sausage. That actually IS my photo. These are great for when you're craving pizza but you're like me and can't just have one piece of pizza.

Until next month, y'all!