Hi y'all! I just got back from the beach so I'm basically giving a quick hello and to let you know that next week I'll be back with pictures of the happenings in the past couple weeks, food and other miscellaneous things. I haven't weighed because I have no interest in punishing myself.  I've had way too much to eat and drink so I'm going to straighten up tomorrow and let my body get back to normal.  I'll weigh on Saturday to see what the damage is and then go from there.

I want to wish my friend Nichole a happy, happy birthday today.  I hope you and Jordan are having an amazing time in New York!

Have a great week y'all!

Happy Birthday To Me, Y'ALL!

Yep, it’s my birthday today and next week I will coming back from the beach so this post and the next will be a bit short.  I didn’t weigh because I know better.  The food I’ve had over the past few days wouldn’t be pretty on the scale and I want to enjoy my birthday week.  I won’t weigh this weekend either but I’ll make sure to weigh the 25th to see where I’m at.  I am enjoying the lax atmosphere as far as food goes but I’ll be happy to get back to normal.  I just feel better when I eat right.  As I’ve mentioned, there are a ton of people with birthdays in May and both my little cousin Alex and my Grandpa will celebrating this week so shout out to them! 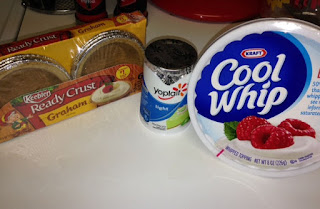 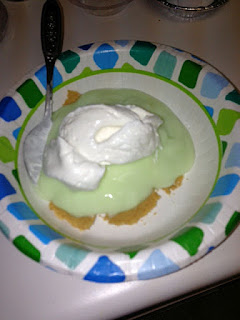 This week I’m sharing less of a recipe and more of a Pinterest-inspired idea.  I bought the miniature pre-made graham cracker crusts which I think are less than 150 calories and the Key Lime Pie yogurt for the Key Lime Pie effect but you can use any kind and just made a mini pie.  The crust broke apart because the yogurt was too heavy but it tasted good so I didn’t care that it was a bit messy.  I also added some lite Cool Whip to top it off.  It’s simple, easy and quite tasty. 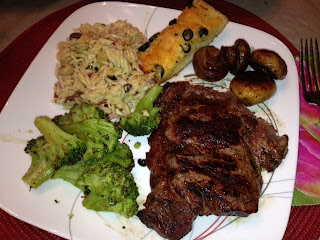 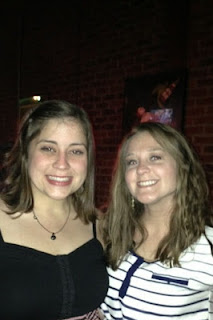 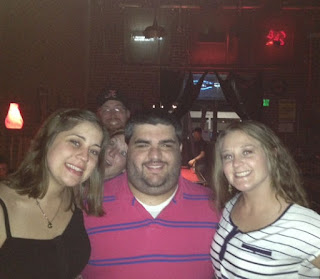 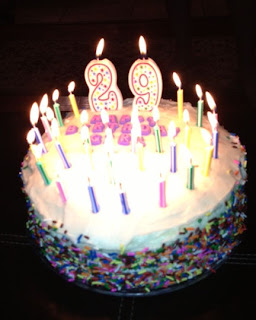 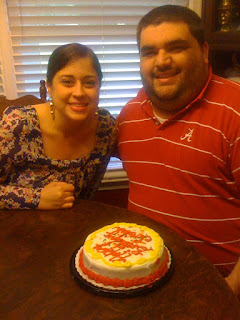 I had a great time this weekend with family and friends.  My mom and brother made me a delicious dinner on Saturday with the best red velvet cake ever and I also celebrated with friends.  I’m so blessed to have amazing people in my life that care for me!

I’m headed to a birthday lunch with my mom today so it should be good!

I hope everyone has a great week. 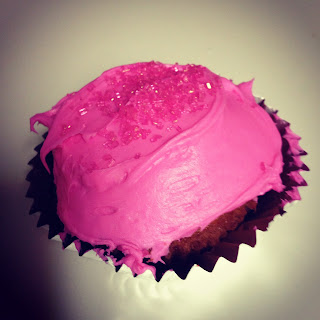 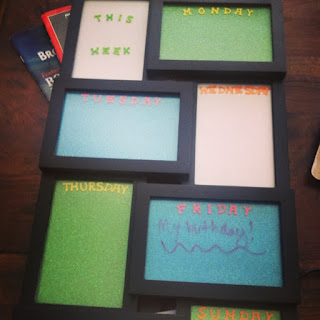 I’ll go ahead and confess that there was no weighing this week and there probably won’t be until closer to the end of May.  I’m just trying to hold on at this point.  I ate terribly this weekend but I’m trying to pick it back up this week.  This weekend, I will celebrate my birthday and then the next weekend I’m going to the beach so I don’t have high hopes.  As usual, though, I’m exercising and practicing safe dieting as much as possible during the week.  My birthday is next Monday and I always eat what I don’t normally get to eat during the year during my birthday week so I have pretty much planned every terrible calorie I will consume that week.  I’ll bounce back in June y’all, May is always a bad month for me. I celebrated Jordan’s birthday this weekend.  The pictures were part of the celebration. I made him some hot pink cupcakes and then I took an idea from his Pinterest board and made it.  It’s basically a simple frame from Wal-Mart.  You put fabric or paper of any kind where the pictures go and label them like a weekly calendar and you can use dry erase markers to write on it.  He loved it so I was happy.  I want to say a quick Happy Birthday to my friend Nish.  Her birthday is Saturday! Also, I want to tell my mother an early HAPPY MOTHER'S DAY! Love you mom! I'm sure I'll have pictures for next week of all of this weekend's events. 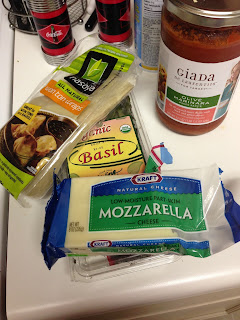 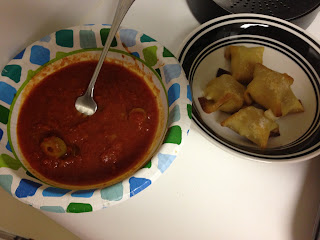 The recipe this week is brought to you by Pinterest.  I know you are shocked.  I don’t know why I have spent a small fortune on cookbooks because I pretty much have accepted that my life is one big Pinterest project at this point.  This recipe is simple.  You take the mini wonton wrappers, put mozzarella and basil in the middle, fold them up and bake them.  I used pepperoni instead of basil which obviously added calories but the basil I had was bad.  I just used the instructions on the wonton package to bake them.  I dipped them in marinara sauce and they were delicious.  I love this olive flavor from Giada.  If you like olives, you’ll love it and it’s not that high in calories.  This recipe was quick, easy and delicious! 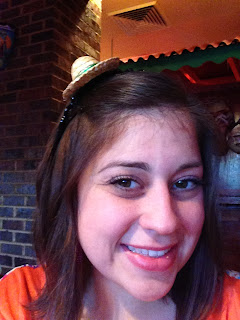 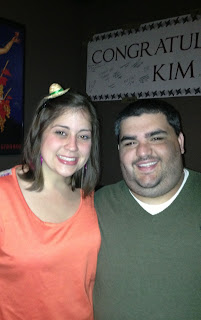 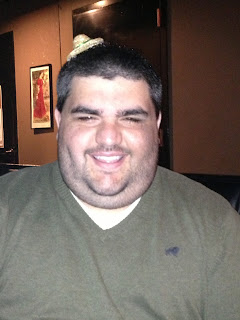 My friends and I also celebrated Cinco de Mayo this weekend.  Our waitress gave us mini sombreros so we had a lot of fun with those. 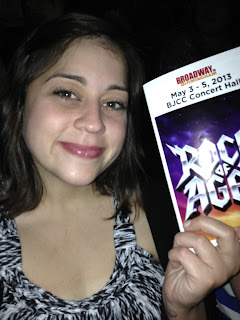 Jordan, my mom and I saw Rock of Ages in Birmingham this weekend from their Broadway Series and LOVE IT.  It was such a fun show with a cute story and awesome music. 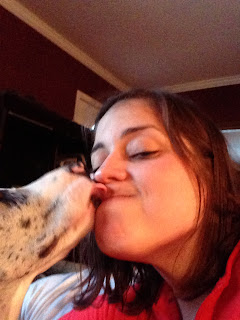 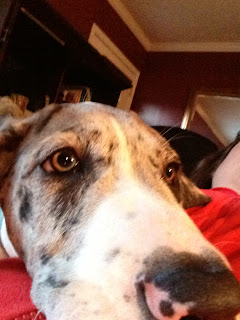 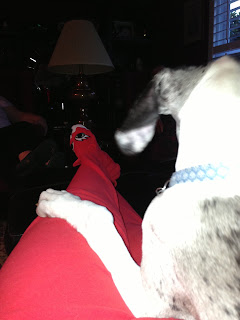 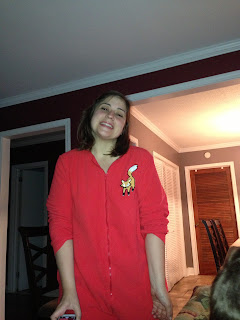 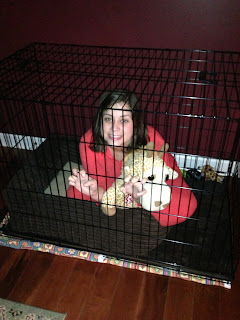 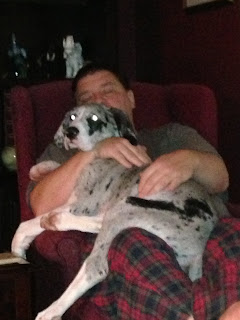 I was being very silly last night and drove over to my parents in my onesie pajamas.  They really don’t expect any different from me.  I was in the mood for a photo shoot and their new dog Grayson decided she wanted to be good and sweet for a few minutes so the above pictures are a result of all that.

Have a great week! I found out this morning a printed journal has accepted 4 of my poems for publication so it definitely made my Monday better!

“It is what it is.” Everyone I know right now.
Posted by Heather Wyatt 4 comments: