Happy 2018 y'all! I hope you had a wonderful holiday season and that you aren't currently freezing your butt off in this frigid weather. I'm just not cut out for cold weather. I do not enjoy it. I'm jumping right into to 2018 with goals, exciting news (TBA) and a path to better mental and physical health. I finally weighed this morning to take inventory/review the damage from the holidays. Since Thanksgiving, I've been indulging to say the least. We celebrated Christmas several times, then there was NYE, Ian's birthday (which happened to be the same day Alabama won yet another National Championship...ROLL TIDE) and a smattering of other caloric events. As of this morning, I need to lose 7.8 pounds to get back down to my pre-Thanksgiving weight. I expected this. I am not giving myself a strict timeline for this. I just want to have more of a routine and get back to a better, healthier schedule. Once I reach that goal, I will think about the next one. It's important to focus on small, individual goals. I am feeling good about things ahead.

I don't know if y'all are into resolutions but I made a list of several that included personal, career, health and other goals that I'm hoping will help me be a stronger, more determined human. This year I've taken the standard "lose weight" goal off the list and I'm focusing on more specific ways to get healthier that will surely lead to weight loss anyway. This year I'm ditching the dependence on numbers. For example, as silly as it sounds, one of my goals is to do a hand stand. Strength is something I'm aiming for both in muscle tone as well as mental strength. I've also banned edible bowls from my life in 2018 seeing as how I ate an unprecedented number of taco salads this year, destroying each and every fried tortilla bowl in its entirety. Other goals include paying off one of my credit cards that I've charged up again, being nicer to Ian, a multitude of teaching and writing goals, chewing my food better and easing up on the binge drinking. I haven't cut anything completely and I'm hoping that at the end of the  year I can say that I lived 2018 better than I did 2017 and that I continue that progression every year. 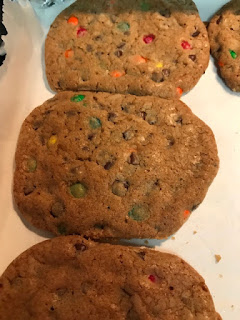 One of the habits I picked up over the holidays was an incessant need to bake. I made lots of holiday cookies and then in an effort to get rid of some of the chocolate in the house, I made cookies from scratch. They were SO good but a dangerous item to have in the house. Mostly, my biggest issues with cookie would be the fact that I am a bowl licker from way back. No speck of dough gets left behind. 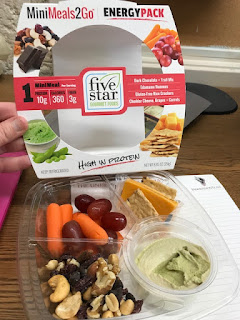 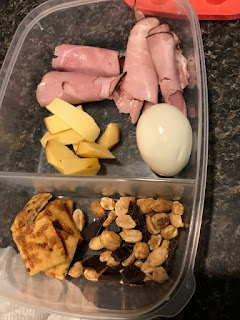 Now that I'm back in school, I'm hoping for routine. As usual, I'm always looking for grab and go lunches. I found this meal kit at Target that included carrots, grapes, cheese, crackers, hummus and a trail mix that combined nuts, dried cranberries and chocolate. It was super tasty and filling and I wasn't convinced it was only 360 calories for the whole pack. On top of that, it was $5, which isn't terrible but I thought making my own at home was a better plan. So, I included ham, smoked gouda, a hard-boiled egg, protein crackers, and a combo of dry roasted peanuts and dark chocolate. I missed the hummus so if I make one in the future, I may add that, but otherwise, it was easy to make and packed with protein. 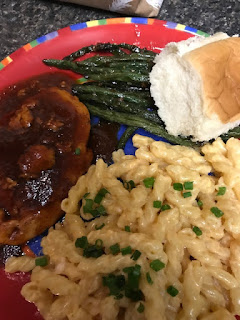 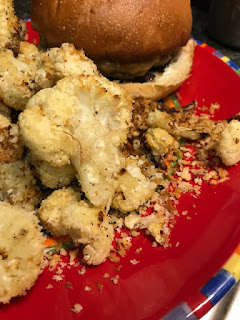 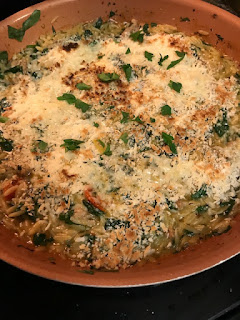 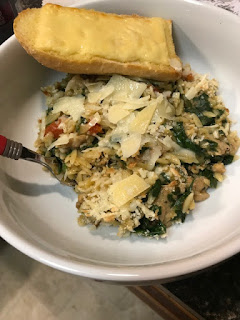 Now that Ian and I are back to our routine of cooking dinner every night, we went ahead and got a Hello Fresh box to mix things up. This particular one had meals that both of us could eat happily (though Ian wouldn't touch the cauliflower with a ten foot pole). The first meal was BBQ chicken, green beans and macaroni and cheese. We added teryiaki sauce to the green beans and cooked them into oblivion because that's the only way Ian will eat them, but other than that, it was tasty. I'm always on board when macaroni and cheese is involved and the sauce for the chicken was great. The next meal was a burger with a delicious bun and caramelized onions. The only catch was that it came with "fried" cauliflower which meant that it was tossed together with oil and panko and thrown in the oven. I enjoyed it fine, but the burger was hands down the bright spot in that meal. They are always so juicy and flavorful from Hello Fresh. The last meal we got was a chicken sausage and orzo dish that had spinach and tomatoes. It was also great. Ian isn't a huge fan of sausage (I know, right?) but even he had to admit the dish was delicious. I especially liked the bites that had chunks of mozzarella in them. Hello Fresh is a bit pricy but it's super convenient and always fantastic quality. 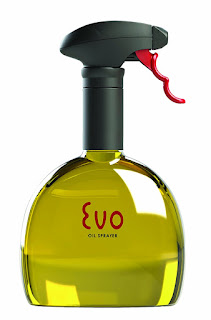 I wanted to tell you about a new product I got from QVC. It's called an EVO Oil Sprayer. You can put whatever oil you want in it but when you spray, it squirts out 1/4 of a teaspoon of oil. I love this because I know exactly how much I'm putting on whatever I'm making and it spreads the oil out well. This way I don't have to use too much oil. A little bit goes a long way with this and I highly recommend it as a product. That's all for now! Holla at y'all soon!
Posted by Heather Wyatt