Happy week before New York y’all. New York is very much on my mind and I will definitely be more chatty about it on Friday but I wanted to get another plug in there that I’m SO ready. I’ve had a very busy and productive past few days with work, cleaning and creative stuff. I won’t go into detail but I’ve gotten a lot done that I’ve been procrastinating for a long time. Most of what I do is an ongoing process but I’m making great strides in the right direction. Progress is being made! 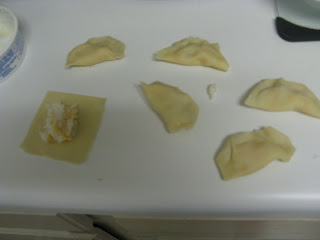 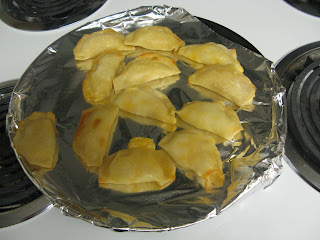 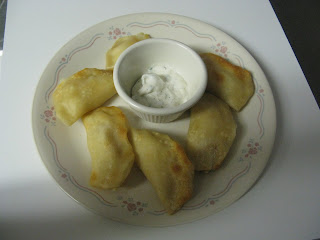 This recipe is called Potato-Cheese Dumplings with Sour Cream-Chive Dip. The more I make recipes and try to save money, the more I change recipes around. When I give you the name of a recipe, it was the original name but most of the time, I’ve made some adjustments to it. This recipe called for fat free sour cream and low fat cream cheese. Well, I had low fat sour cream and fat free cream cheese so I switched that around. For the sour cream and chive dip, I didn’t have chives so I mixed low fat sour cream with parsley flakes and a ton of garlic and onion powder. The sauce was the best part.

I’ve never worked with wontons before but they weren’t bad. I think my biggest mistake with them was not peeling them apart very well. There were several dumplings with two wontons. Basically, you mix together the sour cream, cream cheese, shredded fat free cheese, salt and pepper and mashed up potatoes (you’ll need to boil them first, I know that seems obvious but you never know) in a bowl and spoon about a teaspoon on the mixture in the middle of the wonton. Gently wet all four sides of the wonton with your finger and then fold it over pinching the edges, making a little half moon. Lay them on a sprayed cookie sheet and spray the top of the wontons before you put them in. I think they were at 350 for about 15 minutes…basically until they are golden brown. One serving of these is four dumplings but they aren’t high in points so I ate all of them and that’s what I had for dinner. They were really tasty! I was especially proud of the combination of the dumpling and the dip. It was delicious and would be great for an appetizer at a party.

I will spend the rest of the week working and packing for my trip. I am sticking to my guns this week because I weigh one more time before New York. I am feeling good about the scale right now and I’m on target so if I gain a few over my back-to-back trips, that’s OK, I’ll be right back on track after they are over. I am not even going to try and pretend like I’m going to be good in New York…in fact I will probably take pictures of every calorie laden piece of food I eat! I apologize if I am sending mixed signals but that’s just how I roll (literally) on vacation. I earned it!

Have a good week y’all!

“I've been tellin' my dreams to the scarecrow
'Bout the places that I'd like to see
I said, friend do you think I'll ever get there
Ah, but he just stands there smilin' back at me

So I confessed my sins to the preacher
About the love I've been prayin' to find
Is there a brown eye'd boy in my future, yeah
He says. girl you've got nothin' but time

My daddy, he's grounded like the oak tree
My momma, she is steady as the sun
Oh you know I love my folks
But I keep starin' down the road
Just lookin' for my one chance to run

Yeah, 'cause I will soar away like the blackbird
I will blow in the wind like a sea
I will plant my heart in the garden of my dreams
And I will grow up where I'll wander wild and free.” Born To Fly-Sara Evans
Posted by Heather Wyatt