Take Three Pounds And Shove It...

Hello All! I trust everyone had a wonderful week/weekend! Other than the gross number on the scale, I had a fine weekend. I knew that after Vegas, I would have a bit of work to do. However, even after a week of being perfect (not to mention the fact that I exercised like a mad woman while in Vegas), I was still up almost THREE pounds. It’s like I can’t do ANYTHING wrong without jumping up on the scale. I realize that I ate too much while on Vacation but JEEZ. Three pounds isn’t exactly easy to work off. Oh well, I didn’t have a great weekend but I’m starting the week off right, as usual. I have really got to get in gear. I have a couple of indiscretions planned over the next couple of weeks but nothing major so I’m hoping to chip away at those three pounds and then after Easter Sunday, I’m going to be even more serious. It would be nice to be down a couple before May…because May is never a good month for me. 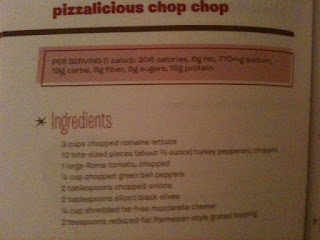 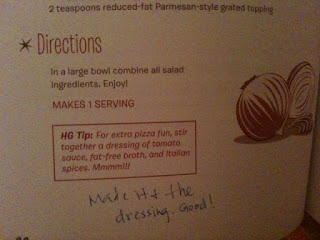 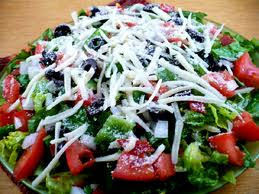 Anyway, the recipe this week is a pizza salad from the Hungry Girl called Pizzalicious Chop Chop. I made this salad (the picture isn’t mine, I lost mine in the process of transferring it to my parents ailing computer) and it was quite tasty. I made the dressing also and it was OK, it wasn’t my favorite. I eat a lot of salads so adding turkey pepperoni and olives to the mix was a nice change on the typical salad. I would make it again, I would just probably stick to Dijonnaise which is what I usually use for dressing. 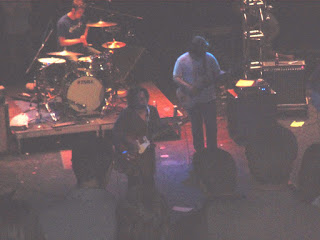 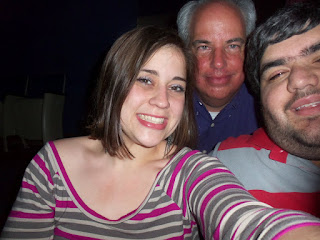 This weekend, a bunch of friends and I went to a charity concert in Tuscaloosa that featured the Alabama Shakes. The lead singer has an amazing voice and the band is great. They are starting to gain national attention and just seem like all around fun people and great musicians. We all had a great time. I wish I had gotten a bit of a better picture of the band, but oh well. It was a good time. 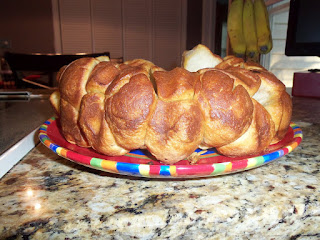 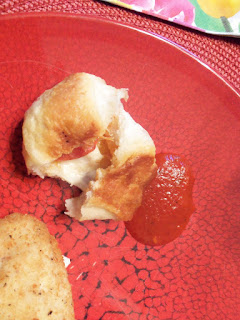 This recipe isn’t healthy but since there is a pizza theme and also, I’m obsessed with Pinterest, I thought I’d share. If you’ve ever had yummy, gooey monkey bread that tastes like a cinnamon roll, this is the non-sweet version of that. This is pizza monkey bread. Basically, you take canned pizza dough, break it off into pieces about the size of a ping pong ball, flatten it a bit, add a piece of pepperoni, a small cube of mozzarella cheese and tuck it in the ball and pinching it closed. After you do that, you put the balls into a Bundt pan that is greased with garlic butter. You also paint the garlic butter on the balls and dump the remaining butter in the pan when you’re done. All you do after that is bake it, let it cool and turn it over onto a plate. You can pull the bread off and dip into marinara sauce. It’s DELICIOUS!

Obviously, I am in what I call a “slow” patch. I am still not in a place where I want to give up or anything. Mentally, I’m fine during the week. I am having problems with motivation, though. I’ve done so well but anytime you lose weight, the biggest fear is of gaining it back. I haven’t reached my goal yet but that’s not my problem. I know it takes longer now and I’m fine with that. However, it is discouraging that a) if I slip up at all, I’m punished more severely than I used to be and b) it seems that I need to find that first love/motivation that I had. That is proving to be extremely difficult. I will continue to plug away but I’m exhausted all of the time and so these disappointments seem to take more of a toll than they used to. I have a lot on my plate so I know I need to rest and I know I need to act right on the weekends so hopefully I will come up with a genius plan to get reinvigorated. A girl at work told me that her sister lost 160 pounds naturally, got a tummy tuck and has now gained every pound back. This made my heart skip a beat and I wanted to vomit. I felt horrible for her. I can’t think of a more horrifying thing to happen diet-wise and I refuse to let it happen to me. 3 pounds is one thing but I can’t go back…and I won’t. I will be brainstorming new ways to get motivated.

That is really all I had today. I want to give a shout out to my Dad! He had back surgery last week. It went well so hopefully he will start to see a change and he will feel more normal as the weeks go by. Feel better Dad! I wish you all the best this week! Talk with you soon! Bye!

“I know the truth when I look in your eyes
I saw the light in your window tonight…” I Saw The Light-Wynonna Judd (I don’t know why but this song has been in my head lately.)
Posted by Heather Wyatt