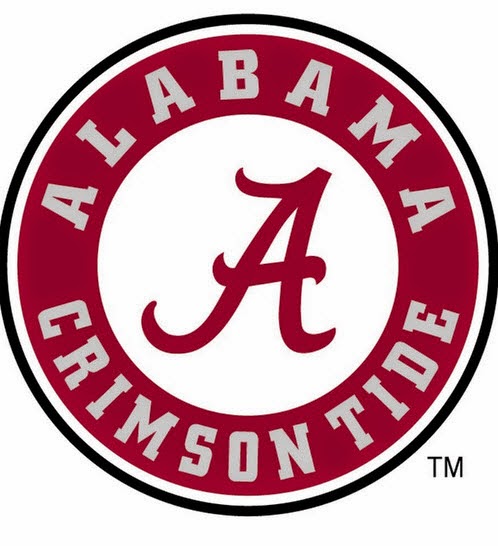 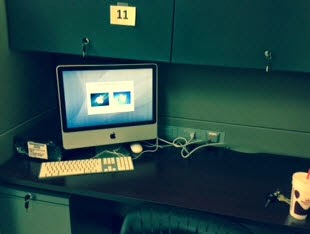 Hi y’all! I want to interrupt regularly scheduled programming to talk about an exciting new chapter in my life.  Many of you already know this because you are my friend on Facebook or I see you on a daily basis.  I have accepted a full time English teaching position with the University of Alabama.  For those that don’t know, I’ve been in the corporate world for well over seven years now.  While I’ve had a full time job with a company called AFFLINK, I’ve managed to get a Masters in Writing, acquire a part time teaching job and begun tutoring athletes at Alabama.  In other words, I’ve had three jobs for quite some time.  I function best when I’m busy but I have to admit, sometimes it is a bit overwhelming.  The ultimate goal in doing this was to eventually gain a full time position.  Well, it’s finally happened! I’m unbelievably excited.  I’ve had so many blessings along the way in addition to the amount of hard work I’ve put in.  I know it sounds like I’m giving an acceptance speech for an Oscar but honestly, it feels that way.  I wanted to take a quick second to thank all of my friends and family who have always encouraged me! I want to tell any instructor or peer that I’ve had from the University of Alabama or Spalding University that wrote me a letter of recommendation, taught me invaluable lessons or just inspired me in some way that  I don’t know what on earth I would have done without y’all…especially Ashley McWaters, Jason McCall and Rosemary Royston.  Finally, after seven years at AFFLINK, I have to thank any supervisor that allowed me to go to school or adjust my schedule when I needed to teach.  Without AFFLINK’s cooperation, there’s no way I’d have gotten this position.  I’m going to face a lot of changes in the coming months but they are changes that I’m welcoming with open arms.  I’m still going to have two jobs but both will be in the world of academia which is something I’ve always wanted.  So, thanks again and Roll Tide, y’all!

Back to business.  I had a bit of a meltdown beginning on Friday.  I won’t lie.  Not many highs to report.  The week before last I was a picture of perfection and I was down only .6 pounds.  Last week, I had two tiny indiscretions and I was up 3.2 pounds on Friday.  I was so fed up with my body after I weighed that I could have thrown something.  It is clear that I can no longer do anything wrong without gaining weight.  Nothing.  It makes me want to throw a full on toddler-style temper tantrum.  It started mid-week when I went to eat Thai food with a friend.  She was moving and that’s what she wanted so we went.  I love Thai food but I’ve never tried to eat that food while dieting.  I went in prepared.  I had looked at the menu, compared calories by surfing the internet and decided.  Once I was there though, I completely went out of control.  Luckily, I had a lot of calories left for the day so I don’t think I went over too terribly but it was clear that unless I was having a cheat day, I need to stay far away from Thai food.  After that I was good until they gave us free pizza at one of my trainings.  Again, I had calories left and I only had two pieces but apparently it was those two incidences that caused my weight to go up over three pounds.  Well after that, it was on.  I was bad Friday night and all day Saturday.  Granted, Saturday was my cheat day so that didn’t count.  I woke up Sunday determined to do better.  My Dad and I went out of town and we stayed at an Embassy Suites.  They made omelets for breakfast so Sunday morning I had an egg white omelet with only vegetables.  No cheese. No meat.  I ate that with some fruit and then had Subway for lunch.  The problem yesterday was my mom’s dinner which was too good to resist.  I am back on today and my only goal this week is to have a perfect week.  I want to be good every day other than my cheat day.  I don’t anticipate any weight loss this week.  I’m hoping that I don’t go up again.  I think my adult tantrum is over but after years of doing this, it is exhausting to be unable to get where I want to be. 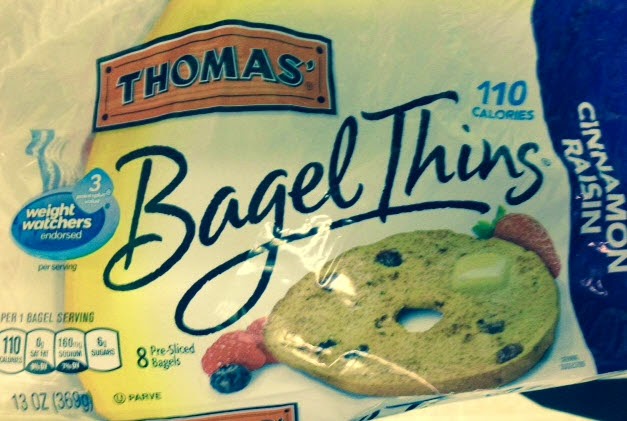 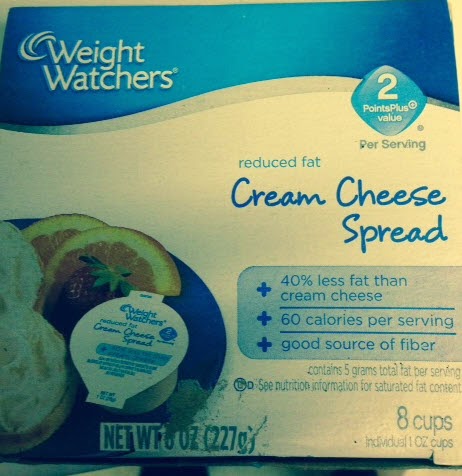 I think I’ve shown this as a breakfast option before but it’s been years.  I love the quick breakfast sandwiches you can get from Special K but since I’m cutting back even more, I wanted an option with even less calories.  These bagel thins are so tasty and they are only 110 calories.  I also like to get the Weight Watchers Cream Cheese that comes in single servings.  It definitely costs more but I don’t trust myself to only eat two tablespoons of cream cheese and these little tubs have plenty in them to cover the bagel thins.  This is definitely a filling and yummy option for breakfast. 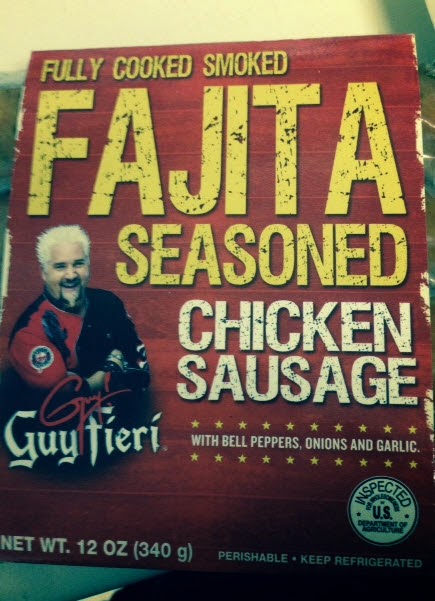 I am really into chicken sausage which is probably a weird thing to be into but as a sausage fan, I’m really happy to have chicken sausage as an alternative.  I bought Guy Fieri’s version and it’s spicy and delicious.  It’s only 130 calories so when you pair that with some vegetables and mustard on the side, you can hardly beat the amount of flavor you get for the amount of calories you are consuming.  He has some other flavors and Target and Sam’s both have their own versions that are pretty tasty too.  I definitely recommend them! 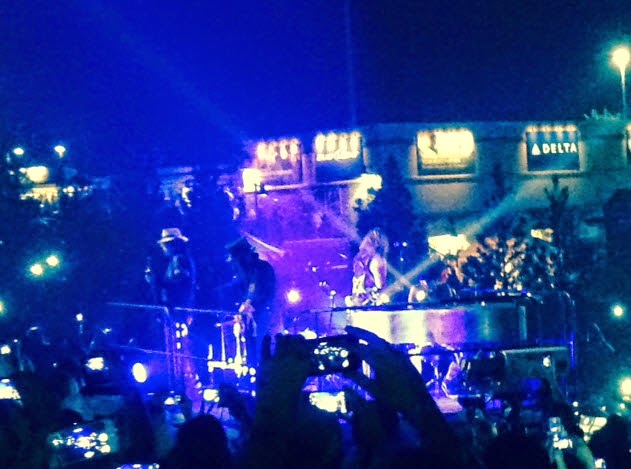 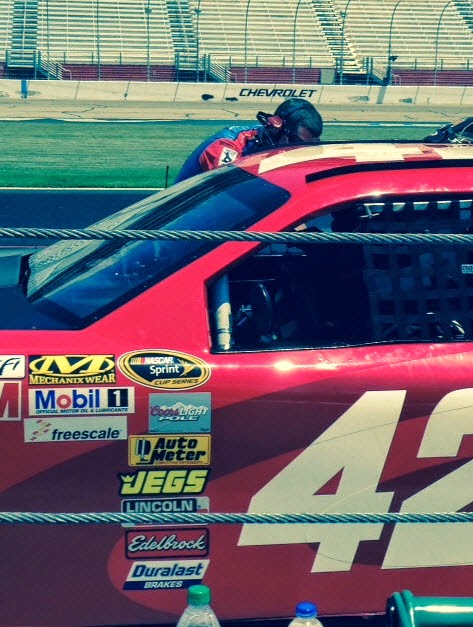 As I mentioned above, my Dad and I went to Atlanta this weekend so he could cash in a Christmas present.  He was able to do a NASCAR ride a long at the Atlanta Motor Speedway. He was nervous but he did it and I think he had a good time.  Saturday night, we saw Alice Cooper and Motley Crue so it was a great weekend.

The pictures and video links above are from the weekend. I’m tired today and school starts Wednesday.

I have a super busy month ahead of me but I’m really excited!