Hey y'all! First of all, ROLL TIDE! Second of all, I actually lost a pound last week.  I was so happy.  I realized early in the week that I wasn't giving myself enough calories.  I was still providing myself the same amount of calories I was when my mind was in full on diet mode.  Since I have been so unmotivated lately and since I'm so busy, I realized I needed to give myself a bit more during the day to keep my energy going and prevent myself from feeling like I'm starving.  Tuesday and Thursdays are often 15-16 hour days so I need to make sure that I energize myself.  The increase in calories worked both mentally and physically.  When I feel like I'm starving I often cheat and then eat way too much.  The extra calories allowed me to stay within my budget and get through the day.  Even though I ate more during the week, I probably still ate less overall and I actually saw results.  Things got a little wonky on Saturday (dang football season) but other than that I had a perfect week and I plan on doing the same this week. 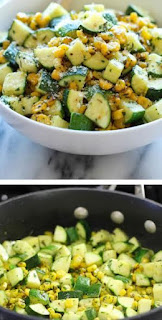 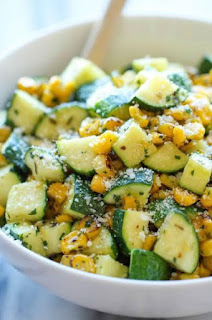 When I made my mom's birthday dinner, I tried to keep her diet in mind and made two veggie dishes that turned out great.  For both recipes I got the images from Pinterest because I forgot to take pictures but their pictures are probably better than mine would have been anyway.  The first was a vegetable medley of sorts that included chopped zucchini, corn, garlic and spices.  It required just a bit of oil but not much and the flavor from the spices kicked the flavor up a notch.  The best part was that I added a touch of parmesan cheese at the end and cheese makes everything better.  My mom took the leftovers from the dish and made a wrap using the veggies, a flat-out wrap, laughing cow cheese and meat (you can use whatever kind you want).  She said it was great and I was clad she was able to reinvent the leftovers. 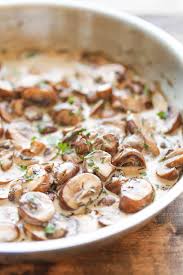 The other was probably my favorite. I just took sliced button mushrooms and sautéed them in a skillet with light sour cream and laughing cow cheese.  It didn't have a "diet taste" at all, it was creamy and it had a stroganoff taste to it which I loved.  The mushrooms were all gobbled up by the end of the night.  For me, I like vegetables but tire of them quickly so anytime they have a different edge to them, it makes it better.

That's all I have today as I embark on yet another busy week.

I hope you all have  a great week!