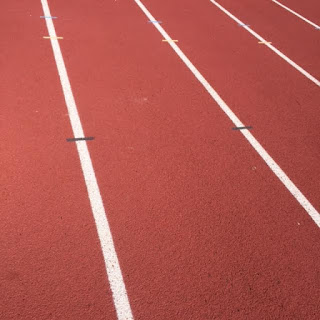 Hey y'all! The picture above is of the running track at Bryant High School in Tuscaloosa. Instead of going left out of my neighborhood last week, I went right and found myself running around the school. It was a long, hard run but I did it. It was 7 miles. I'm due to run another 7 miles tomorrow. My hope is to do the half marathon again but I'm not putting too much pressure on myself because I'm going at a super slow pace right now and well, that crap is hard. The reason I posted the track picture is because while I was running, I decided to take a lap around the track since nobody was around. It brought me back to high school. Now, the track itself is much nicer than the one I had in high school. The track at Holt was mostly gravel but I remember Coach Belcher yelling at me to finish my mile run. I couldn't run in high school. I was chubby and got made fun of for it and I definitely couldn't run. I would try. I would run and then my side would throb in pain and I would get too winded so I would stop. I tried to make jokes out of it and just walked slowly around the track. "Pitiful," she would say when I finally got done. I wish teachers had to run the mile with you in school. Knowing that I can now run one, four, twenty-four laps around a track is satisfying when I think about how far I've come. I may have gained some weight this year but I can't forget about the accomplishments I have outside the scope of the scale. I stayed around the same weight this week. I am happy with that because I trusted myself rather than my tracker and everything didn't fall apart the way I thought it would. As the holidays approach, there will be temptations ahead but my goal is to not binge and not beat myself up. I'm getting better at that every day. 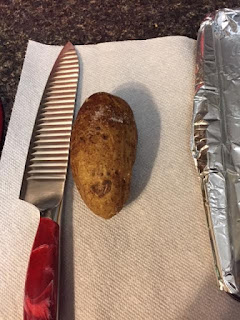 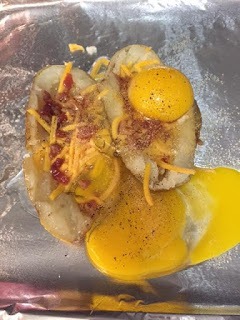 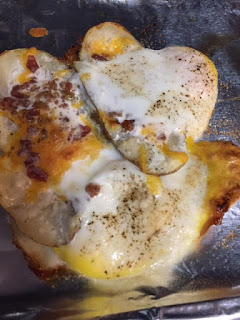 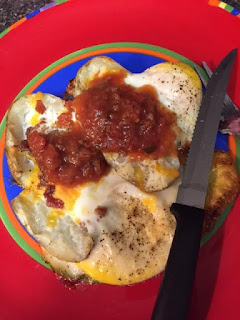 I mentioned last week that I have a boat load of potatoes at my house that I'm trying to use so I made a couple recipes with them. The first was a breakfast potato skin. The only thing about this recipe is A) you probably need a bigger potato than I used and B) if you're hungry, you may want to have a bowl of cereal instead. Having said that, I really liked it. All you do is bake the potato (this is the time consuming part) and then split it in half. You could use the microwave but this time I wanted the skin a little crisp so I used the oven. You could probably do some kind of combination. After you split it, gut it. I used the inside of the potato in the soup I talk about below. Spray a cookie sheet with non-stick spray and add the potato skins. Add salt and pepper, sprinkle a little cheese, maybe some bacon, whatever you like. Then crack an egg onto each piece of skin. My potato wasn't big enough so egg went everywhere but it was OK. Pop it into the oven (which should still be 350 degrees from baking the potato) and cook for 15-ish minutes. I cooked it too long for my taste because I like a runny yolk. You kind of just have to watch it. When I pulled it out of the oven, I added salsa but only because I was out of green onion, which would have been my preference. This was yummy and filling but I'm usually into much quicker breakfasts. 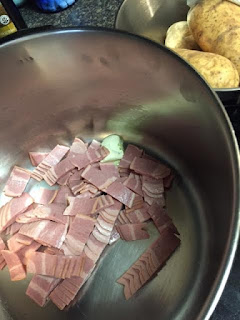 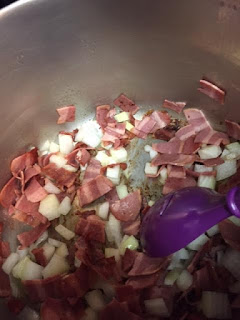 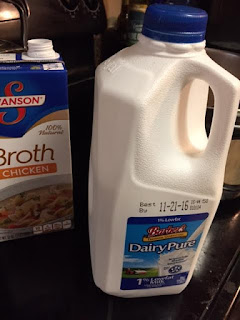 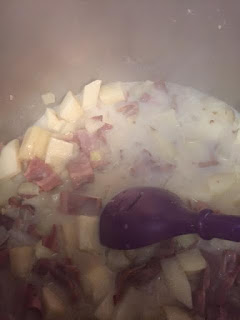 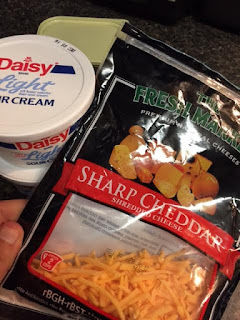 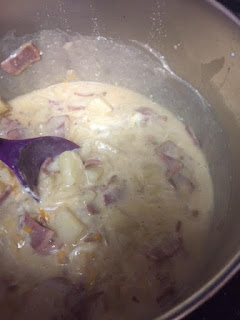 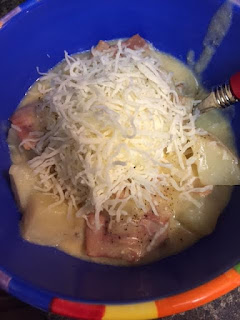 In addition to the potato inspired breakfast, I also made potato soup on Sunday to eat throughout the week. The internet labels it as "skinny" potato soup. It's finally soup weather and I'm happy about that. I'm a big fan of soup. This one is super easy and it's been great to take for lunch so far this week. I browned some turkey bacon (which needs a little help with light margarine) and onions. Then, I added a few tablespoons of flour which helps thicken the soup. I personally think I put a little too much flour because it was really thick. Then, pour in two cups of chicken broth or stock and two cups of warmed milk. Stir it all around, add the potatoes and let it all boil until they are soft. It takes around 15 minutes. Then, I added some shredded cheese into the soup and a few tablespoons of light sour cream. I didn't measure much when I made this, it's kind of up to you. I stirred that in and it was all done. Since it was Sunday, I added a little extra light sour cream and mozzarella cheese because I'm crazy like that. This comes highly recommended. I also wish I had had green onion for the top of this. Your girl likes to add green onion on things. I have remedied the problem and bought some. Soups are great to make and eat on all week.

I'm excited because next week I get a break from teaching (but not a break from grading) and then it's pretty much home free. This has been one heck of a semester and I won't be sad to see it go.

Alabama has two home games left and unless everything completely falls apart (knock on wood) we are sitting REAL pretty right now, so that's a positive thing.

Wish me luck on my run tomorrow!

Y'all have a great week/weekend!