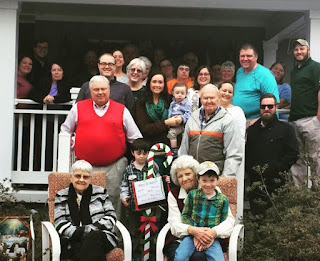 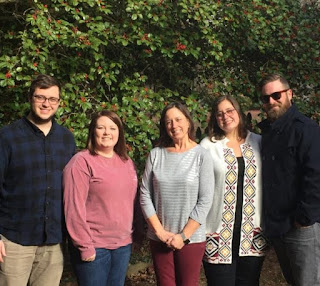 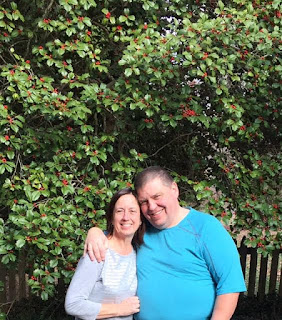 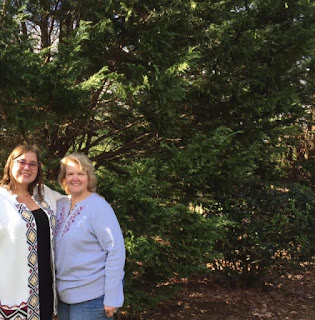 Hey y'all! I am so fortunate to have a flexible schedule this winter break because it's allowing me to make mad dashes to the store and elsewhere to tie up loose Christmas ends. The holiday season is always so hectic! This past Sunday, my whole Alabama family drove to Chattanooga to celebrate my Grandma's 84th birthday. It's been so long since everyone (cousins, extended family, grandparents, great aunts, etc) was in one place. It was such a special thing. Thanks to my Aunt Brenda for organizing and for everything you do. We had a photo shoot, of course and we we were able to get a group shot.  Before I left for Chattanooga, I hopped on the scale. I was down about a pound and a half. I was pleased with this because since then, I've been eating too much. I haven't been eating unhealthy foods that much but let's just say I'm padding up for the holiday season. I just feel too soft. At this point, I'm trying just to maintain or gain only a few pounds over the next few weeks. I went to the doctor for a checkup yesterday and other than the number on the scale not being my favorite, I'm healthy as all get out. I'm grateful for that. Anyway, I've decided not to weigh until the morning of New Year's Eve. I will do my best to stay on track but have an understanding that it's the season of indulgence. Best of luck to everyone else out there! I know the holidays are full of temptation for everyone. 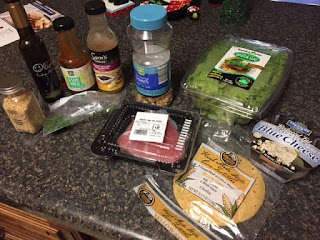 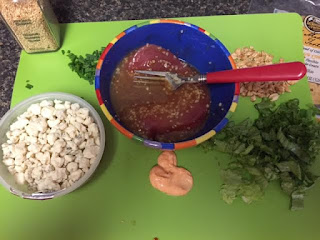 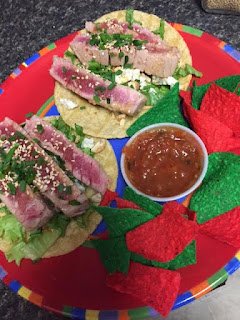 Y'all, not only are these tacos one of the prettiest thing I've ever made, they may be in the top 5 best dishes I've ever made! They were SO good! Also, it's my recipe! I was inspired by a salad I had this past summer but I made the whole plate without a recipe to guide me. I had some tuna steak in the freezer and exactly two aging corn soft taco shells and thus, the tuna steak taco was born. Tuna steak is so great because it takes almost no time to cook. In fact, the less you cook it, the better it tastes. Trust me, I've overcooked LOTS of tuna steak. All I did was marinate the tuna steak (after sprinkling with salt and pepper) in a light ginger sesame dressing I have, a garlic chili sauce and minced garlic. While that was taking a bath, I chopped up some salted peanuts, chives, and lettuce. I also mixed together some light mayo and sriracha sauce. I heated some sesame oil in a non-skillet pan and when it was hot, I added the tuna steak. I seared it on each side for 2-3 minutes. Truthfully, it could have used about 30 seconds less on each side. While it was searing, I took the taco shells, and I spread a little of the sriracha mayo in the middle. I added lettuce, chopped peanuts and crumbled blue cheese. Don't add too much blue cheese...just enough for tang. When the tuna was done, I let it rest a few minutes (long enough for me to put some festive chips and salsa on my plate for a side). I sliced it in strips and placed those strips on the tacos. Then, I put a few drops of low sodium soy sauce on top of the taco and finally, sprinkled toasted sesame seeds and chives. Y'all, I obviously didn't invent fish tacos but I have to say, I'm proud of these. They were so delicious, salty and crunchy! Oh, and they were super filling. I will most definitely make this again. 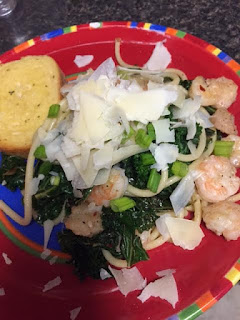 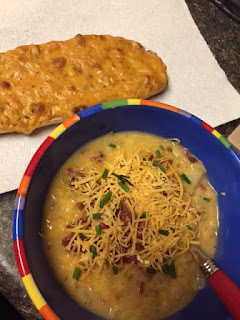 Ian and I get Blue Apron only a few times a year because first, Ian is picky and there are a lot of recipes I have to modify just so he will eat them and second, it's expensive. I don't care how they spin it, it's not cheaper than grocery shopping. However, it's fun and convenient because everything is right there for you. So, when I see a menu that I think we can both get on board with and we have the money, I get a shipment. So far this week, we've made Spicy Shrimp and Kale (which was chewy, I must have overcooked it) Pasta. It came with bucatini pasta, which is fun because it's like a pasta straw. It was filling and pretty good. I made Ian's with chicken and his version lacked flavor so I ended up adding jarred Alfredo sauce to it. The second one we made was potato chowder. This came with a side of cheese sauce toast and it was probably one of the best Blue Apron meals we've had yet. I added a bit of sour cream and bacon bits to it because it had a little kick and also, I love sour cream and bacon. I still have one recipe left that I'll share next week.

Have a wonderful week everyone!