Hi Everyone! I hope you had a lovely Valentine's Day. Ian and I exchanged cheesy gestures and then ate and drank to celebrate our love and the fact that it was Tuesday. I have been steering away from a rigid schedule the past several days which is liberating but I know I've been eating too much. I'm hoping to find a balance between insane planning that causes anxiety and a flippant attitude that makes me feel like I need a mid-day waffle. I did finally weigh and I was down about 5 pounds since Christmas. I was happy that I had shed the holiday weight and decided that I would weigh again next Wednesday morning. That means I need to get it together and play nice by eating only when I'm hungry and stopping when I'm full. The struggle is real.

This semester has been one of the busiest of my life. I seem to have had an influx of meetings, projects and future preparations. I have so much up in the air which stresses me out because I like to mark things off my list. Oh, and apparently I'll be starting a split semester class on March 6th at Shelton so it's only going to get worse. Even though it sounds like it, I'm not complaining. I like having job security and goodness knows I always need extra money. In addition to school work, I'm also working hard on getting this MLWOR book project an ISBN number. It's a dream that I've become obsessed with accomplishing. Writing a book is more than hard...it's a soul-sucking venture whose highs and lows are more extreme than I could have ever imagined. That seems dramatic to say but it also feels right. One of the ways I'm working toward this goal is by attending a writing workshop next Friday the 24th. It's kind of a day for writers who have written a book and are now saying "What now?" That's me! In addition to the workshop, I'm also going to be meeting with an agent and actually pitching the book. She will tell me ways to improve the pitch and hopefully give me some ideas. Because of this, I need to be ready to give them all I've got. I've been making some recipes from the book that you all may have seen before so I can get some decent photos. I'd like to bring a sample that provides a visual for the agent. I'll be sharing them again here and making Pins for them on Pinterest (hopefully). What I'm saying is, I'm sorry for any repeats. That may be something I do the next one or two weeks. I'm nervous about this whole thing but excited because I've been working on this material for a LONG time.

The first recipe is for Spicy Deviled Eggs. I am a BIG fan of Deviled Eggs and this recipe kicks them up a notch and adds bacon. I am incredibly lazy and usually by hard boiled eggs from the store or my mom makes them. I realized I had never made them myself. So, I decided to boil some eggs and it won't surprise you to know it was really easy. 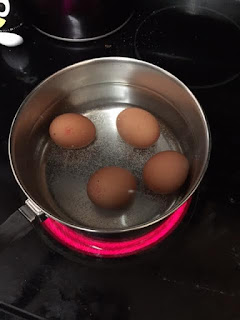 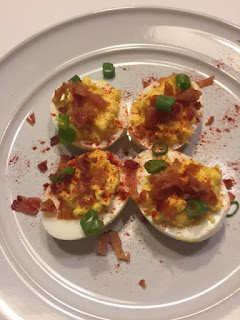 Hard boil your eggs, cut them in half, dump the yolks in a bowl and mash them up. Add salt, pepper and garlic powder. Mix in the mayo, mustard and hot sauce. Use the mixture to fill up the egg white halves. Top with crumbled bacon and green onions. It’s so easy! Regular deviled eggs are delicious but having them this way makes for a nice change to kick things up a bit.

Next up are the diet soda cakes. I have a lot of these that I make. I started with chocolate and then made creamsicle. 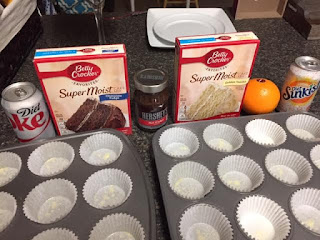 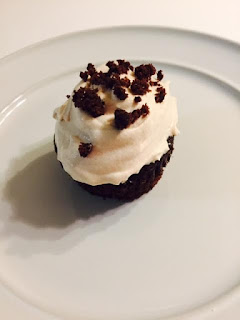 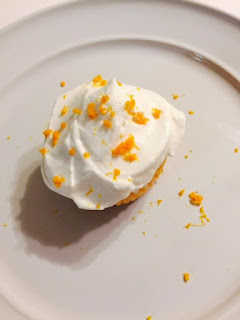 Pre-heat the oven based on the instructions on the back of the cake mix box. Empty the box of cake mix into a mixing bowl, add soda. Mix. Pour the mixture evenly into a 12-cupcake cupcake pan that is lined with liners and sprayed with non-stick spray. Bake the recommended amount of time on the box. While the cupcakes are baking, get out another bowl and mix together the chocolate fudge with the whipped cream. Cover and refrigerate. When the cupcakes are done, let them cool completely if you want them to have the frosting.

Pro tip: Only frost the cupcakes you want at that moment. If you frost all of them and refrigerate, the top gets a bit gummy. Frost them as you eat them.

*Suggestion: If you are wanting to kick it up a notch, adding a frozen, miniature peanut butter cup to the middle of the batter before baking makes it even more decadent and still less calories than a full-fat piece of cake.

Pre-heat the oven based on the instructions on the back of the cake mix box. Empty the box of cake mix into a mixing bowl, add soda. Mix. Pour the mixture evenly into a 12-cupcake cupcake pan that is lined with liners and sprayed with non-stick spray. Bake the recommended amount of time on the box. While the cupcakes are baking, get out another bowl and mix together the whipped cream, orange zest and orange juice. Cover and refrigerate. When the cupcakes are done, let them cool completely if you want them to have the frosting.

*The zest and juice are optional but add a really bright orange flavor. You will be able to taste the orange in the cupcakes but it will be somewhat faint so adding the extra to the frosting will really amp up the orange vibe in the cupcake.

I made tuna tacos pretty recently but they are pretty and yummy so I wanted to include them in the book and repeat the recipe here. 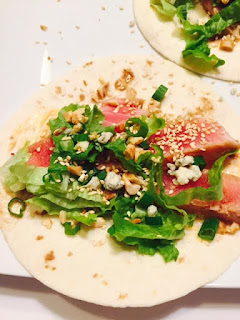 Tuna steak is a gift from the sea. If it’s not overcooked, it’s tender and moist almost like an actual steak. Also, keep a watch for it to go on sale at specialty stores. It can happen and when it does, grab them up and freeze them so you can have the decadence of tuna tacos anytime you want. I used to think the idea of a fish taco was disgusting but I’ve changed my ways.

Add salt, pepper and garlic powder to both sides of tuna steak after patting it dry. Marinate it in ginger dressing, chili sauce and minced garlic. While that’s marinating, chop the lettuce, green onion and peanuts. Also, in a small bowl, mix together the mayo and sriracha. Bring a non-stick skillet to medium-high heat. Take the marinated tuna and sear on both sides for no more than 1-2 minutes per side. Basically, as soon as a very thin white layer creeps up into the pink of the tuna, it’s DONE. Overcooked tuna turns into canned tuna and that’s not what you’re going for when it comes to tacos. When it’s done, take it out of the pan and let the steak rest while you prepare the tacos. Take each tortilla, divide and smear the sriracha mayo on the bottom of both. Then, add lettuce to each one. Add Blue Cheese on each one. Sprinkle the chopped peanuts. Then, slice your tuna steak into strips and divide them evenly on each taco. Sprinkle green onion and sesame seeds onto both tacos. I put a few drops of soy sauce on each. I have a big appetite and two tacos fill me up. These tacos are hearty, salty, filling and delicious.

Finally, I couldn't leave out a picture/recipe of the low cal ranch that I make. 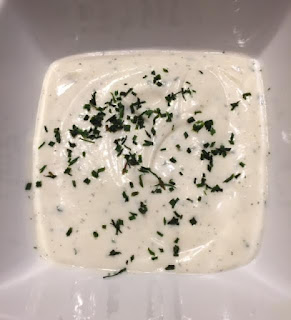 3-1/2 Cups Buttermilk
1 Cup Light Mayo (I’m very particular about mayonnaise too. I don’t use “salad dressing” mayo; I use “real” mayo)
2 1 oz packets of your favorite ranch dressing/seasoning mix
1 tablespoon garlic powder
1 tablespoon onion powder (the extra powders are optional but I like it to have a lot of flavor…adding these gives a very strong flavor that only intensifies as time passes so if you don’t like strong garlic flavor, eave this out or lessen it)

*Feel free to split this recipe in half if you don’t think you’ll need that much. This make a huge batch.

Plop the mayonnaise in a big bowl. Pour in the buttermilk half a cup at a time. This is an instance in which it’s important not to throw everything a bowl at once because you’ll end up with clumps of mayo. Stir the buttermilk in slowly making sure each half-cup portion gets mixed in evenly. I highly recommend using a whisk for this. Once the mayonnaise and buttermilk are combined and there aren’t a ton of mayo clumps, stir in the dressing mix, garlic powder and onion powder. Pop a lid on the bowl or container, stick it in the fridge and let it cool a bit then it’s all yours.


See y'all next week!