Hey y'all! We are less than a week out from Valentine's Day. I only bring that up because I've got some exciting culinary treats in my future. I'm going to renew a V-Day tradition with Jordan and have Cheesecake Factory on Sunday and then Ian and I are getting steak and bread pudding at the Chophouse in T-Town on Tuesday. I'm also going to try to get my hands on some chocolate covered strawberries. Tis the season. Other than daydreaming about splurge meals, I've been completely swamped. I have A LOT of balls in the air. I just wanted to type balls. But seriously, I'm busy as all get out and I just agreed to teach a split semester class starting in March. So, it's real y'all. I'm handling it pretty well right now and had just settled into my crazed and financially strapped lifestyle when Ian's car decided it was done working last night. It had to be towed and we are in limbo right now, just hoping for a miracle. It came at a pretty horrible time since we are going on vacation for spring break and then he has a bachelor party but life doesn't wait for convenient times to happen. I'm surprisingly calm even though everything around me is hectic. I'm trying to apply my "one day at a time" theory to all aspects of life I guess. My plan was to weigh on Valentine's Day but I may not be able to take it anymore and weigh sooner. Not knowing the number has been strange but it's been nice to take a break from the obsession. I think I may go back to checking regularly again but try not to let the number define me. I'm anxious to see if I've gotten any of the Christmas weight off. We will see. I'll definitely be able to report next week. 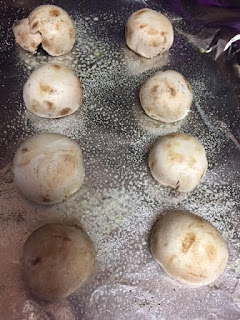 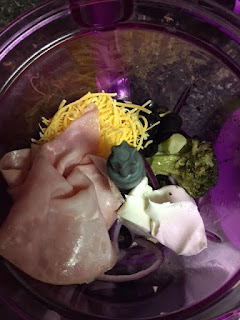 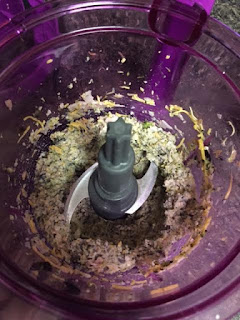 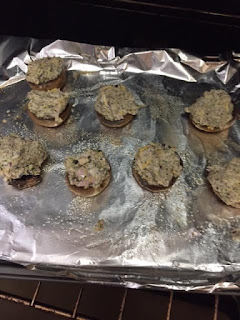 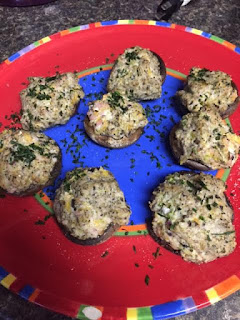 I have a couple recipes to share this week that are easy and healthy which is my favorite thing. If you don't like mushrooms, you could try this recipe with any stuff-able produce: peppers, zucchini and I can't really think of anything else right now. The cool thing about stuffing mushrooms with stuff is that you can also choose whatever ingredients you want or have in the refrigerator. I took large button mushrooms, removed the stems and washed the caps. I layered them on a baking sheet that I covered in aluminum foil and sprayed with non-stick spray. I popped them in a pre-heated oven (400) to roast while I prepared the other ingredients. I was going to chop everything up then remembered I had an awesome food processor so I used that instead. I tossed in the mushroom stems, black olives, leftover broccoli, red onion, deli ham, way too much garlic, low fat cream cheese and a bit of low fat shredded cheese and let er rip. Once it was all blended and a totally ugly color, I got out the mushrooms, flipped them over and stuffed them. I didn't use all the mix and decided that was OK. I baked them about ten minutes, sprinkled some chives over them and they were done. Mushrooms are almost zero calories so the only thing setting me back here was the cheese and ham. It was super low carb but also delicious. Like I said, you can make this recipe your own but I'm always a big fan of edible food vessels and mushrooms certainly qualify. 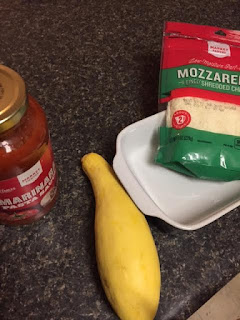 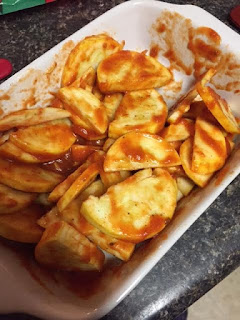 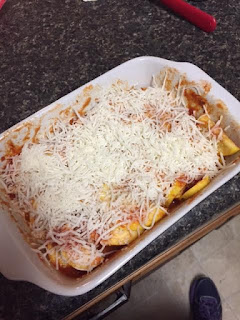 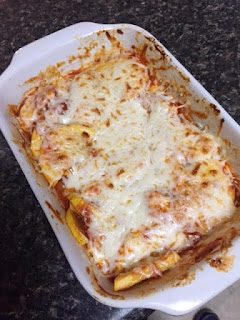 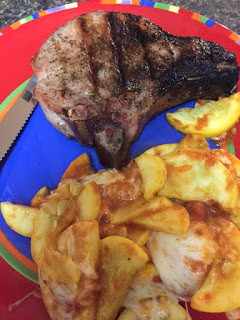 The other recipe I made served as a side dish for a DELICIOUS bone-in pork chop that Ian grilled. All I did was toss together a sliced yellow squash (you can use zucchini) with a couple tablespoons of store-bought marinara, salt, pepper and garlic powered in a small baking dish that I sprayed with non-stick spray. While I was chopping and tossing, the oven was pre-heating at 350 degrees. I arranged the squash in the dish and then topped it with low fat mozzarella cheese. I went a little heavier on the cheese than I probably should have. Oh well. I baked it about 7-8 minutes until the cheese was bubbly and it was done. It was a cheesy, low carb vegetable side dish. I'm not on an exclusively low carb diet or anything but I skip the carbs at dinner sometimes. This made a great addition to the pork chop and it was super easy so I'll probably make it again soon.

Have a great week everyone!
Posted by Heather Wyatt