Happy last Wednesday before May y'all. I'm in full zombie mode because I haven't slept that well lately and I got a wicked sinus infection/probably bronchitis this weekend. Luckily I was able to get my hands on some antibiotics on Friday but on Saturday I felt like someone had lit a campfire in my chest and that I was going to die. I emerged from my sick den on Sunday feeling a bit more energetic...well energetic enough to do the bare minimum of school work I had to do to get my week started. Since then, I've been coughing like crazy. Today is the first day that I feel like I might be getting rid of it for good but I'm SO TIRED. Professionally, I'm excited because I only have another week and a couple days until all my grades will be posted and I'll be done. Creatively, I suffered quite a blow yesterday. Without going into too many details, I know now that I need to work harder. This is something I always knew but didn't want to admit. People who manage to dedicate 100% of themselves to both their writing and their teaching are not human. I don't see how they do it. Now that summer is coming, it's time to push myself and figure some things out. Part of me is excited while the other 87% of myself is burned out. We will see where the road takes me I guess. 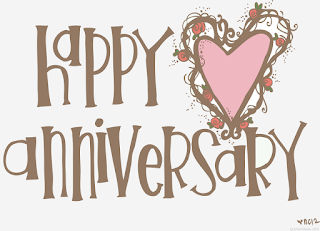 I'd like to wish my parents a Happy Anniversary! They are celebrating 35 years of marriage on Monday. That's a REALLY long time y'all. Well, congrats to them and thanks for getting hitched so David and I could be here to do this life thing. 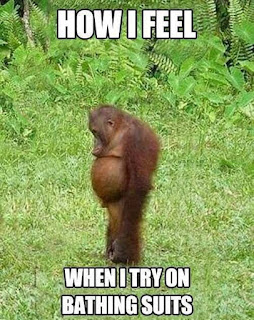 Finally, since my schtick has been about weight for the past 7 years, I guess I should discuss that. I haven't weighed in a few weeks. At first it was because I was afraid. I'm so sick of looking at the scale to tell me if I'm "good" or "bad." Well, this past weekend I tried on a couple bathing suits I bought and I didn't hate them. I didn't feel like a supermodel or anything but I put out the extra cash to buy well-made suits that are created for people with hips, thighs AND a belly. Bathing suit season is almost here and it strikes fear in the hearts of millions of women (and men) everywhere. Well, I didn't feel too bad in them...and I think that's a positive thing. Feeling like you are satisfied with the way you look is far more important than the numbers game. I've been eating well this week and feeling better. So, I'm not sure I want to weigh because I fear that will put me in a category in my mind. Having said that, I'd like to continue the trend of feeling more confident because my beach trip is in a little over 3 weeks! I'll be with friends and have fun no matter what but I want to work hard until then. For now, I'm skipping the scale and as long as my mentality stays strong, I think I'll stay off of it for awhile. 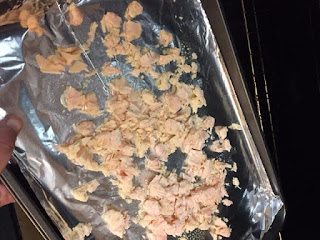 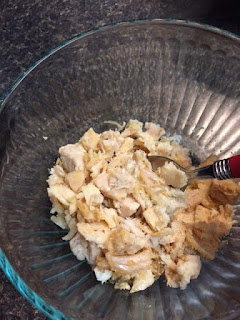 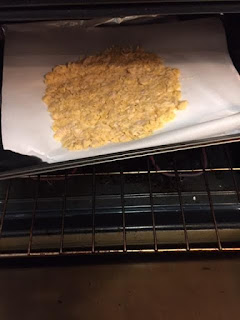 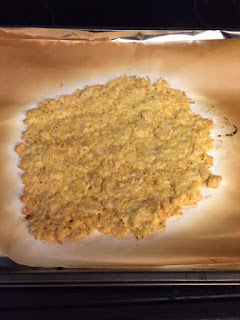 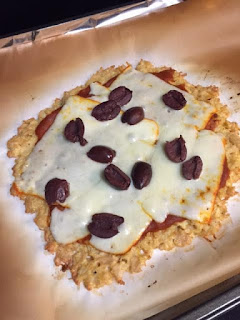 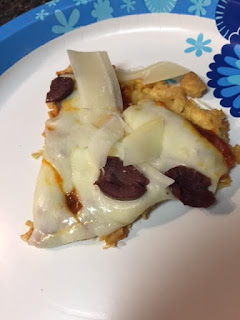 The only food item I have to share today is one that I stumbled on while looking at low-carb recipes. If you are eating healthy, it's only natural to eat less carbohydrates. For me, I can't go carb free again because I'm a total monster without bread. Having said that, I do eat low-carb quite a bit, especially at dinner. I've attempted the cauliflower pizza crust before and it was far too much work to be worth it. When I saw the chicken pizza crust recipe, I was skeptical but had to try it. The most surprising thing I found about the Chicken Pizza Crust? It's REALLY good. Pre-heat the oven to 500 degrees. I know that's a lot but I think that's to dry the chicken completely. Take two regular-sized cans of canned chicken and drain all the water from them. Then, add them to a baking sheet covered in foil and parchment paper. Spread the chicken out in a thin layer and then add to the oven for about 5 minutes. This ensures that the chicken is completely dried out.  Look, I know that some of you HATE canned chicken. If that's the case, this may not be for you but you conceal that flavor for the most part. After the five minutes, remove the chicken from the oven and add to a mixing bowl. To the chicken add one egg and 1 ounce of grated parmesan cheese (that is what the recipe called for so I weighed mine but it looked to be about a quarter cup). I also added salt, pepper and garlic. Looking back, I would have skipped the salt because both the chicken and cheese are salty. Stir the ingredients until you have an almost dough-like consistency. On the same baking sheet, spread the mixture out, using a spatula to flatten the dough into a circle shape. For me, I found the crust difficult to work with in terms of shaping it so once I got it thin enough without breaking it, I stopped. The shape was...rustic. Bake the crust for about 7-8 minutes. Take it out and then add toppings. I know olives aren't pretty but I love them. I only added Muenster Cheese and Olives on top of a layer of pizza sauce because I figured the crust had enough protein in it. I stuck it back in the oven long enough for the cheese to get melted. I was still sure that this was going to taste awful and maybe my low expectations made it taste better but when I bit into it, I was shocked to find it delicious! Drying out the chicken almost gave it a crunchy effect and the crust held up when it was cut and when I picked it up as a slice. It was a bit caloric for my taste since you have to use two cans, an egg and lots of cheese. If I only ate half it wouldn't be that bad but it wasn't big and I'm not an "only eat half" kind of girl. If you're on the low-carb wagon, it's a fantastic recipe!

Have an awesome week y'all!