Back To The Drawing Board

Hey Friday, it’s WONDERFUL to see you again. You should really come around more frequently as I tend to miss you dearly. As far as my ten’s of readers, I hope you all are having a productive and nice day. Today has been pretty good for me. I will start off by saying that I am fairly disappointed in my diet performance this week. It was like, I just decided that I would diet when it was convenient for me and that’s not really how Weight Watchers works. It sort of works best when you are on it...all day...every day. I had too much for dinner the past two nights and then today was the awful and awesome Big Friday at work. There was a pot luck theme this week which means there was a giant hodge-podge of random, delicious food. There was cake, cookies, buffalo chicken dip, boneless wings, chips, tons of dips, salads, pastas and breads. I decided that I would participate today because I never do and I sort of already screwed up this week (the dumbest logic ever, I know). I told myself that I would get ONE plate with a TINY portion of a FEW things. I’m sure you can predict how that all went so there is no need for me to elaborate. Just know that there was a Neapolitan ice cream incident a few minutes ago. Having said that, I’ve decided that starting Monday, I am going to have to buckle down again. Like July, I want to go several weeks (5 to be exact, the last week in July and all of August) being totally and completely strict on every day but Sunday. I need to go a little longer this time so I can get used to it. There is no reason to be cheating in August based on my calendar...I only have one birthday to celebrate and I will figure out how to get through it. I can see that I’ve become way too complacent and it’s time to settle down. Honestly, there isn’t really a reason to be totally bad again until Halloween/Thanksgiving season. Football games are tough but I managed to go ALL football season last year without cheating (except the National Championship Game) so I can do it again. I guess that means my mood is going to be bad for a few weeks until I get used to it but I’d like to lose 20-30 pounds before the end of the year. That is TOTALLY doable...if I do right...so...there’s that.

Ok, I think that is enough rambling about weight...I definitely won’t be recording my weight for at least a week or two. Bless my heart. So...I wanted to show you all the pictures of the finished products from All Fired Up. You will see my coasters, my new paper clip dish (or whatever it is) and my mom’s plate below. 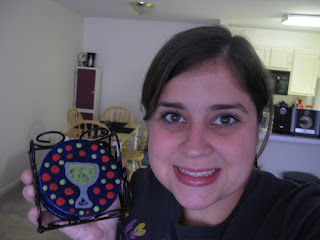 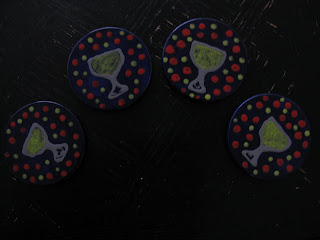 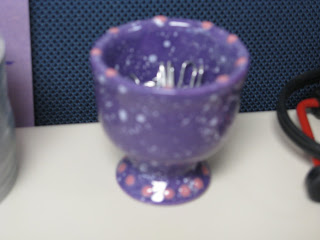 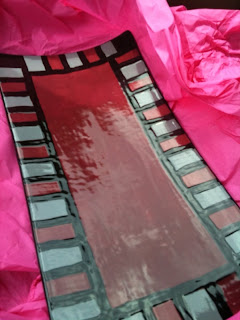 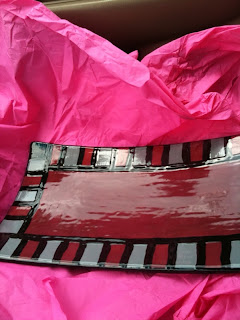 I thought everything turned out pretty cute. I can definitely tell some places that I would make some changes on the coasters but I can’t do that now so I just put them on our coffee table so we could enjoy them. I can’t sing the praises of All Fired Up enough...I have so much fun there.

I wanted to briefly tell you about Pandora Radio.

I know, I know, some of you are probably thinking that I am seriously behind on the times and I am but I just recently downloaded the app on my iPhone and I love it! I had heard of it before but just never gotten it so I thought I would try it out and I am SO glad I did. For those of you that DON’T know, Pandora is internet radio that lets you build your own stations. Basically, I put in Glee and it made a Glee station that plays songs from Glee and then songs that they deem relatable so other show tunes, Disney music, and some 80s stuff. My Kelly Clarkson station plays mostly Kelly Clarkson, Pink & Michelle Branch. It’s so cool...they also have some premade stations that are nice. I only know how it operates on my phone but I think you can also download it on your PC or laptop. Get it! Seriously...go get it now.

One other discovery I made was at Academy and it’s my brand new water bottle... 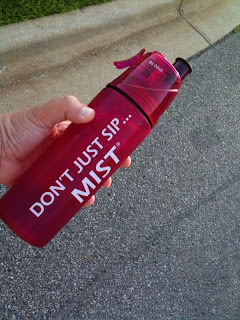 This water bottle not only allows you to enjoy a cool beverage, but it also gives you the ability to squirt yourself in the face with water. I LOVE IT! I loved it so much that I decided to take a picture... 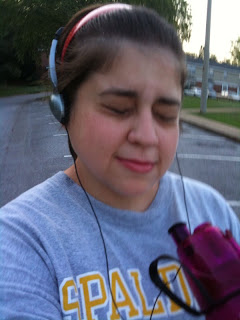 I had WAY too much fun with my morning walk photo shoot and instead of boring you by including all of the pictures one by one, I let you see just how crazy I am and included a shot of my camera roll at the end of my walk. 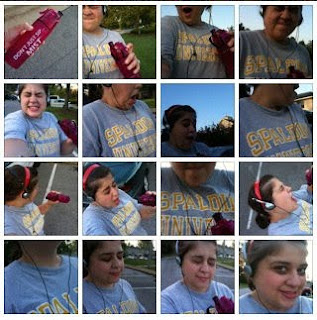 I know I’m crazy but y’all...I get SO hot walking and it feels so good to just mist myself in the face...lol. I think you can tell that I liked it.

I have a fun weekend in store. I am having dinner with various friends and family on different nights, there will be lots of walking and then tomorrow night, some of us (Jordan included!) are going to see Colbie Caillat at Alabama Adventure... 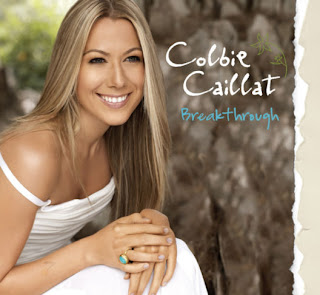 I’m pretty excited because I love her! It should be fun!

I hope you all have a weekend planned that will allow you to relax and have fun and be around people you love!

But I miss screaming and fighting and kissing in the rain
And it's 2am and I'm cursing your name
You're so in love that you act insane
And that's the way I loved you
Breakin' down and coming undone
It's a roller coaster kinda rush .” The Way I Loved You-Taylor Swift
Posted by Heather Wyatt