I Feel The Burn!

Hello All! I do hope you are having a nice Tuesday and that your weekend and your Monday were delightful as well.

Ok, enough pleasantries. I was in Chattanooga this weekend so I didn’t have my nice flat apartment complex to walk around. I walked around my Aunt Brenda’s neighborhood on Sunday morning...here is a view from the top of the hill: 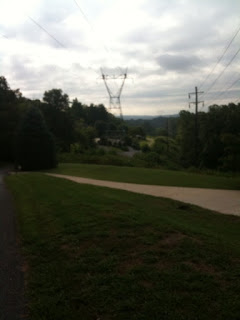 For some reason, I was feeling very fit so I walked around her circle 6 times and the hill was no joke and when I woke up Monday, I could barely stand. My calves were totally on fire but it wasn’t just them...my stomach and arms and back were sore too. It was rough. I pretty much just waddled around all day. It still hurts pretty bad today but I have been able to walk it out a little. I will definitely remember that next time. It’s probably good for me to walk up hills but I don’t care...I may find some way to pump up the workout but walking up an extremely steep hill 6 times in a row will not be it.

While I was there, I also got to meet up with my friend Colleen from Spalding and I finally met her dog Otto: 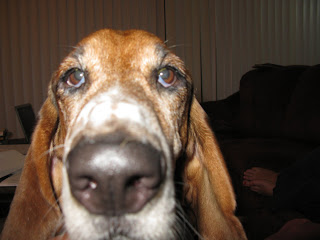 He’s so precious...a little rowdy but I didn’t mind because he was so cute! It was good to see Colleen and catch up and maybe we will be able to meet up more now that she lives in Chattanooga again.

My Dad, Oma & I all ate lunch at my Grandma’s Sunday and we got to play with little Drew. Drew is Mark (my cousin) & Lindsay’s baby and he is SO cute...

He is such a good baby. Most babies don’t really like me but he was very laid back and we had a spitting contest of sorts...I’m sure they will love the bad habits I was teaching him.

Also, while I was gone, I got my fake Otter Box in the mail: 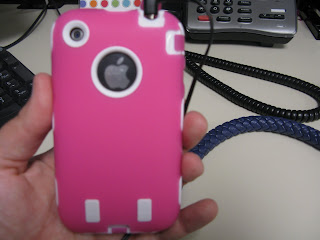 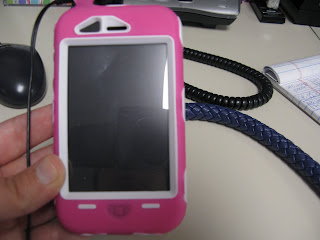 It’s kind of bulky and it’s made out of the rubber material that kind of pulls my hair but it’s cute. It does seem to keep the phone sturdy and it has a screen cover so that’s nice. Not that I would try it, but you are supposed to be safe if you accidentally drop your phone in the water with these covers and I don’t think that’s true...at least not with the fake $6 version I got from Hong Kong because it doesn’t have a cover for the camera and the speakers are still exposed. I’m not sure I will keep it forever which is why I didn’t spring for the $50 real deal in case I didn’t like it. 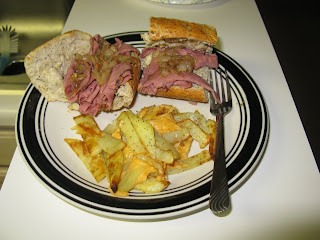 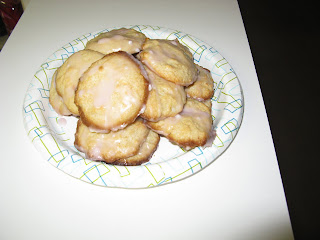 The first is a Weight Watchers French Dip recipe and of course my favorite cheese fries. The sandwich and fries are super easy but I was also making the cookies too and it proved to be a little much for a Monday night. The sandwich was really good but the au jus turned out to be au mush because I was preoccupied with my cookies but it was still fine because I just piled it on the sandwich and the bread was really crusty and filling. The cookies are also a Weight Watchers recipe. They are pink lemonade cookies. They have butter and sugar and they also have pink lemonade frozen concentrate in the dough and in the icing (made with confectioners’ sugar). The cookies were actually delicious. They made several (I actually think I made them too big) so I brought some to work this morning and everyone seemed to like them. I can’t have too many because they are 2 points each and I can’t really justify eating them when I can have way more filling food for 2 points. All in all, it was a tasty dinner, it just took me well over an hour to prepare everything so I didn’t get to rest my poor wounded calves very much last night.

I walked with my mom when I got off work last night and I when I looked down at my feet, I noticed my shoes were a little worn on the sides. I have known I needed new ones for awhile. I have had these shoes for a few years at least and I’ve been walking for a LONG time now. I didn’t know how bad they were though until I turned them over... 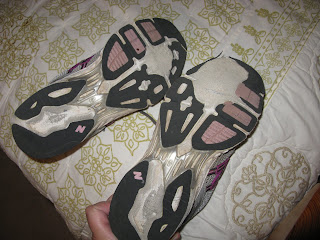 Yikes, I have apparently walked all of the traction off of the bottom. I’d say I need a new pair sooner than later...any suggestions? Anyone tried the butt shaper shoes? I need shoes with good arch support. It kind of felt cool to see them all worn like that. I don’t think I’ve ever worn a pair of tennis shoes out...lol. My parents have a dog (Dixie) and the pads on her paws are still soft and pink and she’s like 14 years old. She’s just not into physical activity and my shoes were always kind of like that as a kid and on into high school...it’s not like I ran or anything so my shoes were always in tip top shape but now there is evidence that I have been working my butt off. It’s obvious I’m motivated to exercise, now if I can just be more strict with dieting...I will be in good shape...literally.

Well, have a terrific night and week!

“Our song is the slamming screen doors,
Sneakin' out late, tapping on your window
When we're on the phone and you talk real slow
'cause it's late and your mama don't know
Our song is the way you laugh
The first date "man, I didn't kiss her, and I should have"
And when I got home ... before I said amen
Asking God if he could play it again.” Our Song-Taylor Swift
Posted by Heather Wyatt