I know I just blogged on Friday but I am going to try switching to Monday. I will post each Monday for awhile and see how that goes. When I weighed Friday, I was bloated from dinner the previous night and in the past I’ve also noticed that if I’m good on Friday, I often weigh less on Saturday. Well, I experimented with this and I was flawless on Friday and I weighed Saturday morning. I weighed 2 less pounds on Saturday than I did on Friday. I think the extra day of being strict makes a difference. Even though it was only one day, the lower number made me feel better. So, I am going to start weighing on Saturdays which is what I used to do when I started but I stopped because I wanted to have more lenient Friday nights. Weighing on Saturday will also help me stay on track on Fridays. I was good all weekend and stuck to my one cheat meal and one dessert. I ate way too much Super Bowl food last night though, I feel sick today. 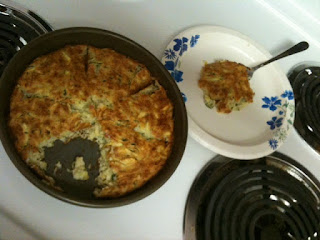 The recipe for this week is Zucchini Casserole. This casserole had zucchini, grated onion, a little bit of Heart Smart Bisquick, egg whites, one whole egg, olive oil, grated parmesan, salt, pepper, parsley and garlic powder. It’s a lot like a quiche and the Bisquick gives it a more filling “feel.” It has awesome flavor and would make a great side dish. 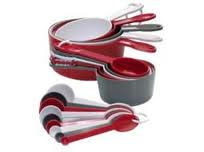 My tip this week is one that I am having a hard time living by. I am trying to re-orient myself to measuring things. It is very easy to try and “guesstimate” a tablespoon of dressing or 3 ounces of meat or half a cup of cheese. The problem is, our “guesstimations” are usually in our favor. You can really add a lot of calories by over doing it in the measuring department. Being precise is a key factor in losing weight. So, when you are cooking, try and make sure to be exact. Even though it’s annoying, bring out the spoons and cups to measure. If you don’t have a food scale, I would invest in one. There are many things that give serving sizes in ounces and trust me when I tell you, you are more than likely wrong when you guess how many ounces something weighs. Also, you don’t want to cheat yourself either. You want to get as much as you should. Nothing more, nothing less. 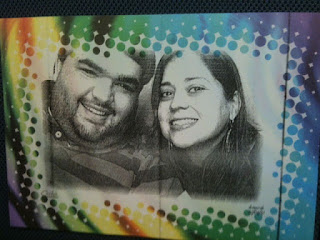 Jordan and I set out again this weekend and between theatres and watching movies at home, I was able to check four more movies off of the list. We were a bit early to one movie and they had this photo booth sketch thing. Naturally, I insisted we go do it. I thought it was cute, so I shared. 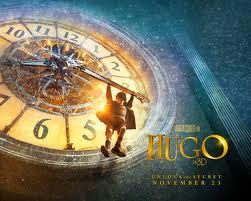 Hugo, as a whole, was a good movie. It had amazing moments but wasn’t amazing overall because it ran slow a couple times. This year is an incredible year for children. I think both of the kids in this movie should’ve been nominated. I honestly think that the nominations for actor, actress, supporting actor and supporting actress could’ve been filled with names of children. They were the stars of the movie and did a fantastic job. This movie reminded me a lot of Extremely Loud & Incredibly Close because both are movies about boys whose fathers have died and they are in pursuit of messages left to them by their dads and a key is an integral part to finding those messages in both movies. Having said that, they are worlds apart in design, time placement and subject. It also reminded me a lot of Little Orphan Annie except there were no playful songs to blend in with the sadness of the situation. Apparently, it is a requirement these days to kill the father of a small boy in order to have a successful movie. The little boy is precious and he has this enormous blue eyes that giant tears would fall out of…I cried every time he did. It would be the kind of movie I’d watch again, but I’d fast forward the first 20 minutes and then skip to my favorite parts. 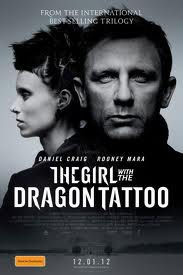 I read The Girl With The Dragon Tattoo very recently (awesome read) and then I watched the Swedish version of the movie. Part of the problem with reading an intricate book and then watching the movie is that you find yourself scrutinizing every minute of the movie. The Swedish version makes a lot of changes and leaves several details out. It’s a good movie but I much preferred the American version. It could be that Americans just have different tastes in movies. I found the American version much more intense. It’s an extremely graphic book and I thought this movie handled that well. It’s quite disturbing in places, actually. There were some major changes in this movie, especially at the end but I thought it paralleled better with the book for the bulk of the story. Rooney Mara earned her nomination and even though I enjoyed the movie immensely and found it 100 times more watchable than Tree of Life, I can see why it wasn’t nominated. Perhaps if it had dug deeper into the back story of the characters like the book did, it could’ve been nominated but mostly, it was just a thriller. 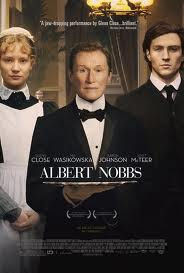 Albert Nobbs was weird. It wasn’t weird because women were dressed as men in order to work, it was weird because it seemed a little unorganized. The storyline was trying to pull the audience in multiple directions but I wasn’t sure how I was supposed to feel at the end. It wasn’t bad and I wasn’t really bored but I just didn’t have any strong feelings about it. Glenn Close did a good job. She shouldn’t win, but overall a great performance. 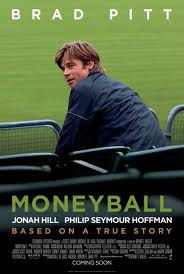 Moneyball. Now, that’s the Brad Pitt I like. Messy hair, a bit crazy and playing alongside other actors that I enjoy: Jonah Hill and Philip Seymour Hoffman. As a side note, since I’ve noted other actors that appeared in multiple movies with nominations, Robin Wright (Jenny from Forrest Gump) was in this movie as well as The Girl With The Dragon Tattoo. I thoroughly enjoyed this movie. I thought it was excellent. I don’t think the movie, Brad Pitt or Jonah Hill reinvented the wheel in any way and I don’t think it should win any major categories but it was a solid movie. I wouldn’t be mad if it took home any statues, either. It was interesting, funny and a movie that lots of people would enjoy. This was also another movie where a child shined, Kerris Dorsey from one of my favorite shows, Brothers & Sisters did a great job. It also had Chris Pratt from Parks & Recreation (another fave show of mine) and he did well. It’s loaded with some of my favorite people and even though baseball isn’t my go to sport, I do love a good baseball movie, and this qualified. It had intelligent humor, insight into the corrupt baseball world and glances at Brad Pitt’s famous side smile. I may even buy this one.

I am loaded up with movies to watch at home so I’m sure I’ll be working on that this week.

I hope you all have a wonderful, low stress week!

“I'd imagine the whole world was one big machine. Machines never come with any extra parts, you know. They always come with the exact amount they need. So I figured if the entire world was one big machine, I couldn't be an extra part. I had to be here for some reason. And that means you have to be here for some reason too.” Hugo Cabret-From the movie Hugo
Posted by Heather Wyatt