Get It Together, Girl!

Happy Monday, Everyone! I will get right to it because I’m a very busy bee today. I weighed on Friday and I was roughly the same as the week before. I was OK with that. I didn’t lose but I understood because I didn’t have a flawless weekend. Speaking of not having a flawless weekend, I was out of control on Saturday AND Sunday. I don’t know what happened. It seemed I had some sort of caloric meltdown. I fully expect to get what I deserve when I weigh at the end of the week. I have already sulked and beat myself up about it and there isn’t any point in dwelling. I will suck it up and accept my weight and realize that I can’t be going crazy on the weekends if I want to lose weight. This, of course, slows the process of reaching goals but I am right back on the wagon today. 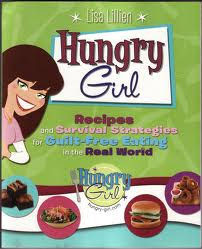 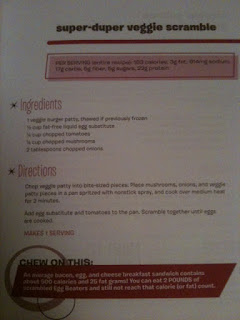 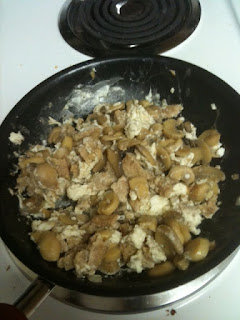 My recipe this week comes from the Hungry Girl cookbook. I know I did a breakfast recipe last week, too but I opened her book and pretty much started from the beginning. There may be another breakfast recipe next week but I will try and vary it up a bit. I LOVE this cookbook and I’ll probably be using A LOT of recipes from it. The Hungry Girl started as a blog and now she has a show on the Food Network. She makes healthy recipes with REAL portions and always lists the nutritional information. Also, she puts a lot of her recipes in single portions which is great for me since I’m usually just cooking for myself. She gives great tips and advice and I pretty much love everything she makes. This is a veggie burger breakfast scramble. Some people turn their noses up the instant they hear the term veggie burger. In recent years, however, they’ve made them taste pretty good. They are low in calories and fat and high in fiber (just make sure to check the nutritional facts to get the best ones) and they are a filling substitute for meat that is high in fat. I got to eat this whole plate that was high in protein and fiber so it was super filling. My advice is to give the veggie burger a shot if you’ve never tried. You might like it. 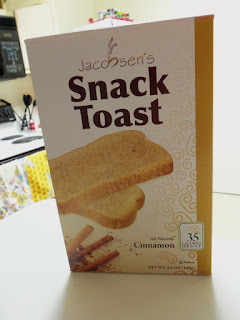 I have yet another Publix find to show you. These are cinnamon snack toasts and they are a little thicker than melba toast and they are topped with cinnamon and sugar. They are only 35 calories a piece so you can have two and they are crunchy, sweet little snacks. I have been dipping them in natural apple sauce for dessert. I love them! 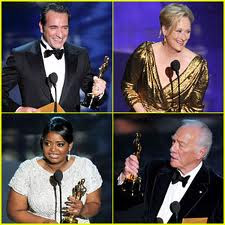 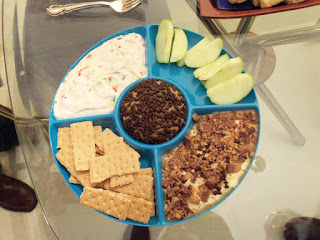 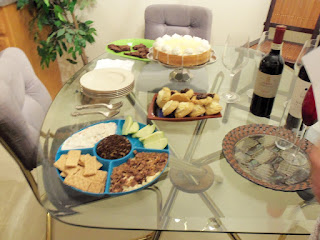 The Oscars was last night and Jordan and I worked hard to see all the movies so we were excited! I was happy for all the winners. The biggest non-shocking shock of the night was the Meryl Streep win. I knew it was a possibility but I was still surprised. I think she deserved it. I would’ve loved to see Viola Davis win but Meryl did a fantastic job in The Iron Lady. She’s also funny and humble and just seems genuinely cool. It was a good show. It was also part of the reason I’m feeling like the world’s biggest fatty today. I have been on Pinterest a lot lately and I couldn’t decide which dessert to make to bring to the party I attended so I made everything! I made a Cake Batter Dip, Peanut Butter Cheeseball, Brownies and a Caramel Apple Turtle Cheesecake Dessert Dip. They were all so yummy. Other people brought appetizers and cookies and it was just a big ‘ole snack fest. Blech. I am feeling it today. I definitely have a dessert hangover!

Like I said, I don’t have much time today so that’s all I had. I guess it’s not that short …it just seems that way because of all the movies I’ve been talking about for weeks.

Have a wonderful week! Hopefully the scale won’t punish me too bad! Talk to you soon, BYE!

“Some point the finger, let ignorance linger
If they'd look in the mirror they'd find
Ever since the beginning,
To keep the world spinning
It takes all kinds of kinds…” All Kinds Of Kinds-Miranda Lambert
Posted by Heather Wyatt