Happy Valentine's Week Or Whatever

Top of the week to ya! I’m not pumped about Valentine’s Day but shout out to Jordan and my parents for the Valentine’s treats…it’s nice to know that even if you don’t have a relationship, you aren’t alone. I already knew that, but it’s always good to have a reminder. I weighed on Saturday morning after having a flawless week and I had not lost any weight. I am still up about 3.2 from my lowest weight. I am in a slump or plateau, whatever you want to call it and I won’t lie…it sucks. I had a mini-meltdown about it because I’m frustrated. I have been working really hard. I reacted poorly to the news on the scale and had a candy, cheese and ranch filled weekend. I am ashamed of my food binge tantrum but it happened and today I’m over it and back on track. Get back on the horse right? Every, single, freaking week. Due to my misgivings and other feminine, water retaining monsters I’ll be experiencing this week, the chances of me losing weight are not great. I will keep on trucking. I don’t have words of inspiration. Working hard and not losing weight is a miserable place to be but I won’t give up…I hope you don’t either. 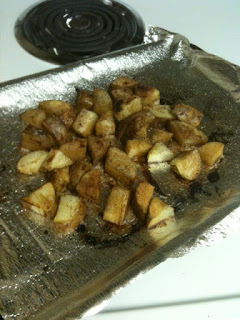 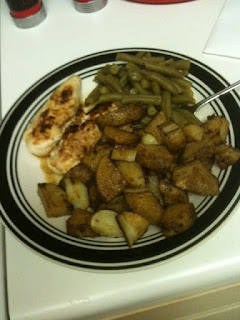 This week is less of a recipe and more of an awesome suggestion for tasty potatoes. My mom made these for me awhile back and I’ve been making them a lot lately. Potatoes are the food I probably consume the most because they are filling and full of fiber. The problem is that potatoes aren’t good on their own. They need flavor and a lot of it to taste good. All I do is chop a potato in bite size pieces and microwave them with a little water covering them for five minutes. While you are microwaving, you can preheat the oven to 425-450ish. When the five minutes is up, get them out, flip them around a bit, add some Worcestershire (“W”) Sauce to them and pop them back in the microwave for 3 more minutes. While that’s going, get out a cookie sheet, line it with aluminum and parchment paper (or the fancy stuff from Reynolds that’s a combination of the two: it’s an awesome invention). When the potatoes finish in the microwave, spread them on the pan, spray them with non-stick spray, load them up with pepper and garlic powder and then salt them. Bake them for 5 minutes or so, pull them out turn them over and around (mix it up a bit), spray them with non-stick spray again, add more pepper, salt and garlic powder and put them back in for another 5 minutes. After that, I like to broil them for 2-3 minutes so they crisp up. You can see that you get a huge portion and there are no calories in the spices, spray or W Sauce so it’s only the potato you have to count and they aren’t bad! It’s a great side dish and something a bit different than the plain old potato. 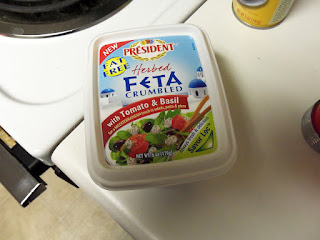 If I had money, I would do all my grocery shopping at Publix. Over the next few weeks, I will show you some stuff I found there that is awesome. This is President Herbed Feta Cheese, Tomato & Basil flavor and the best part is…it’s FAT FREE. Y’all, this is my new obsession. There is 35 calories in one serving. It’s great in salads and eggs and everything. I am really enjoying it. The downside is that it’s 6 bucks for one small container. Oh well. 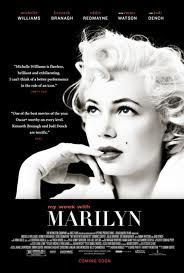 This weekend, Jordan and I took Operation Oscar all the way to Atlanta to see My Week With Marilyn because it wasn’t playing anywhere else. I’m so glad we did! I get pretty grumpy when we have to travel (especially to Atlanta, it’s not my favorite place) but it ended up great. We had an awesome Italian dinner at Provino’s in Douglasville. They have one in Chattanooga that has always been a family favorite. It’s not healthy, in any way but…man, was it good! The movie was worth the drive as well. I haven’t always understood the acclaim that Michelle Williams has gotten in the past but she did a fantastic job in the movie. She looked gorgeous and I think she did a great portrayal! 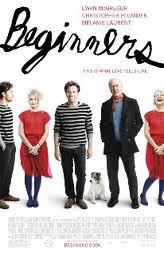 I also watched the movie Beginners on DVD Saturday night. This movie who has a nominated Christopher Plummer was a pleasant surprise. I wasn’t expecting much but I really enjoyed it. I also found out that Christopher Plummer is the father from the Sound of Music (one of my all time favorite movies). I had no idea. He was brilliant in the movie. The movie is a story of a man (Ewan McGregor) and his dying father (Christopher Plummer)who after 40 something years of marriage comes out gay and it follows his new relationship. It highlights the relationships McGregor has with not only his father but his deceased mother and new love interest. It’s mostly sad but has some funny moments as well as moments that are heartwarming. I really enjoyed it. 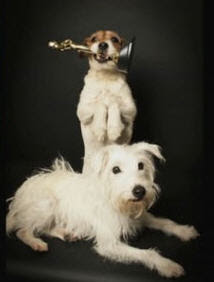 I am a freak about dogs. I can see a dog on the screen and no matter what’s happening, good or bad, I start to tear up. So, I’m glad that dogs are a big part of this Oscar season. “Uggie,” the dog from The Artist was a precious counterpart to Jean Dujardin. He was extraordinarily talented with tricks and his personality lit up the screen. I personally don’t think the movie would’ve thrived without the cute little thing. “Cosmo” is the dog that played “Arthur” in the movie Beginners that I saw this weekend. He also was a scruffy, cute and pertinent addition to the film. He connected each of the characters and I thought he was great. I have read some comments that they need an animal category at the Oscars…I don’t see that ever happening but I would support it if it did! 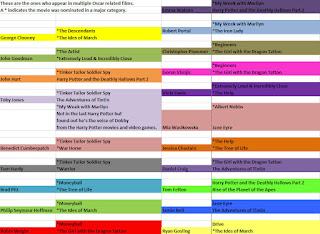 Over the course of this Oscar season, Jordan and I began noticing (and I’ve mentioned it here, too) that there were many actors appearing in more than one Oscar related film. Since there were so many, I decided to create a little graph (you'll probably have to click on the picture to make it bigger so you can see the names) that shows which actors are in more than one movie. It’s interesting to see all of the connections. It may be that this happens a lot but I’ve never noticed it so much until this Oscar season. I only have a couple more weeks to finish up before the big night. I have 7 left to watch in the major categories and I hope to watch a couple more in the minor categories. It’s a lot but hopefully I’ll be able to finish…I just have to make time.

As an aside, I was published in a literary magazine called, Falling Star Magazine, and they paid me! I received a $10 check! It’s not much but it’s definitely the first time I’ve ever been paid for a poem. It was a cool feeling. My mom is making me keep the check to remember, she gave me $10 to make up for it, lol.

I hope you all have a fantastic week.