Well, here we are again.  It’s another manic Monday.  As you may remember, it’s “No Weigh May,” so I haven’t stepped on a scale since April.  Right now I’m still in recovery mode from my birthday and I already feel like I’m making progress.  I don’t feel so swollen.  I’m certainly a little less frumpy than I was last week.  Hopefully by the time I weigh in the first few days of June, I won’t have much more making up to do. 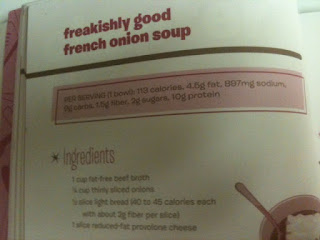 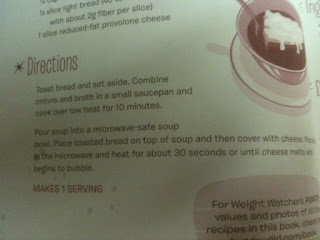 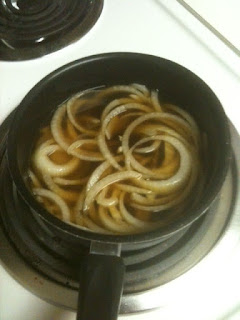 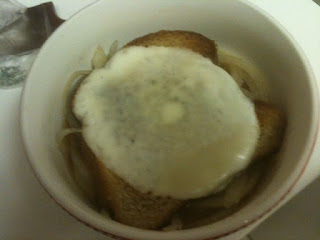 I had a bit of oral surgery last week.  I had some tissue removed and frankly, I’m not recovering as nicely as I would like.  Anyway, I’ve eaten even more soup than usual which I didn’t think was a possibility but evidently it is.  Because I eat soup out so much, I don’t usually eat it that much at home but since I’m drinking my food more than chewing it these days, I thought I’d give it a shot.  I’m sorry that the pictures are a bit blurry.  I was using my iPhone (which happens a lot so blurry pictures are frequent).  The recipe couldn’t be easier.  All you do is simmer the broth and the onions together for 10 minutes.  Leaving them in 10 minutes leaves a bit of a crunch to the onions which I like but if you want yours completely done, you may want to leave them a little longer.  I added the bread and the cheese to the top and it was a warm, tasty treat.

I have a random tip to share.  This may seem obvious but I’ve learned this the hard way.  Before you set out to make a recipe, make sure to not only look at the ingredients ahead of time but also the instructions.  I have bought ingredients to make recipes before and then when I got home they required a food processor or an emulsifier (neither of which I have).  If the recipe requires something funky or something you don’t own, it’s probably for a reason and recipe may not work without it so just make sure to pay heed to the direction. 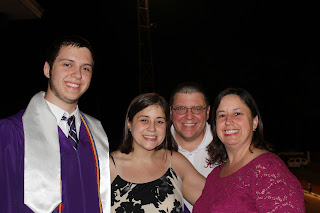 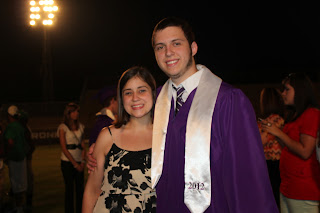 Well, my brother did it! He’s a high school graduate.  We are all so proud of him! I am looking forward to what the future holds for him.  Congrats again, David! 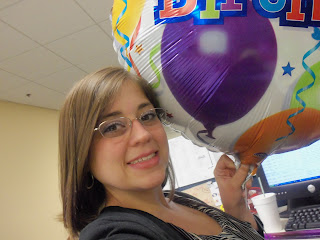 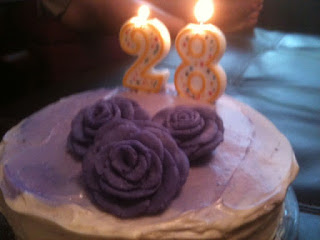 Even though my birthday was last Sunday, I had a couple more pictures to share.  My office mates threw a birthday party for myself and another coworker and got me a balloon.  They also had a nice setup of food so thanks to them.  Also, my mom made me a red velvet cake last night and it was AMAZING.  She used fondant to make purple flowers to put on top AND she made the inside purple too!  I loved it! It has been a wonderful birthday season, I must admit.

That’s all I had! Have a fantastic week and a great memorial day weekend!

Please be thinking about my parents.  They are leaving for a vacation this weekend to Denver.