The theme for this week is high and low.  I have a high calorie recipe to share and a low cal one.  The number was up on the scale which was a low point but I was SUCH a good girl this weekend and that was a high point.  There are highs and lows in life and there are certainly highs and lows in dieting.  I knew that the scale wouldn’t be my friend because the prior weekend and the appreciation luncheon we had at work on Wednesday were not great.  However, one plus is that the number wasn’t up a terrible amount, a pound or so.  Another was that I only weighed once the whole weekend and I was fine.  I am still in the process of mitigating my obsession with the scale.  The best part is that I was a picture of perfection this weekend.  I was bound and determined to have a flawless weekend.  Friday, Saturday & Sunday are by far the most difficult days for me.  I managed to follow my plan quite nicely and had no regrets about my well-earned cheat meal last night. 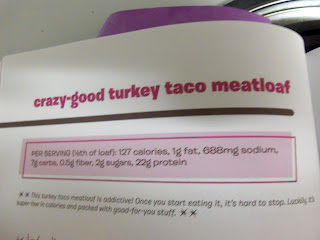 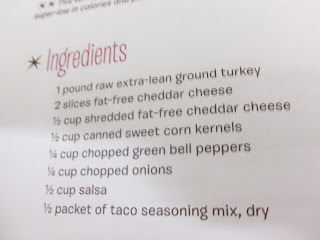 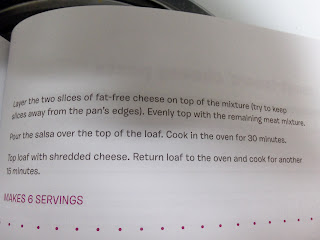 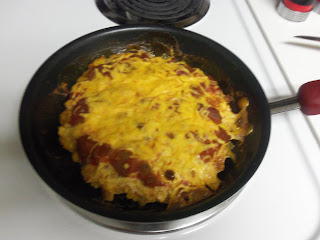 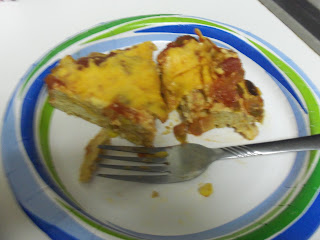 My regular figure friendly recipe this week is a turkey meat loaf.  I didn’t think we had a loaf pan so it was more of a turkey pie then a loaf I guess but it turned out great.  I eat a lot of turkey.  It’s a lean, white meat and it’s a great friend to the Weight Watchers program.  The problem with turkey is that if it’s not cooked correctly, it can be very dry.  In fact, when I make turkey burgers or turkey breasts, they tend to dry out.  I haven’t mastered the art of moist turkey.  So, I was a bit nervous about the meatloaf.  Much to my surprise, it wasn’t too dry and tasted awesome.  The taco seasoning made the meat have a ton of flavor and adding the cheese and salsa on top kept it moist.  I even gave some to my roommate and she liked it too.  It’s super simple to make and would be a nice family dinner recipe for during the week. 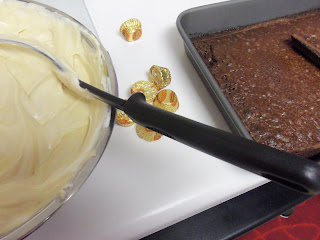 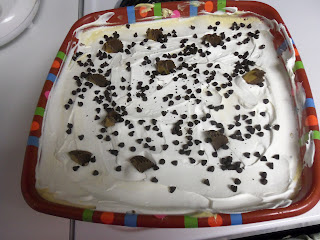 I have a complete obsession with Pinterest.  I spend a lot of time pinning.  I mostly pin food and crafts but I rarely make anything.  Well, that’s going to change.  I’ve decided to create something Pinterest inspired about once a month.  If you are in a place where you aren’t ever  cheating and you see a picture of a dish that looks way too good to be healthy in the corner of a paragraph in my blog from time to time, you may want to skip over it.  I am calling it my Pinterest corner.  For this edition of the Pinterest Corner, I made a dessert for the cheat meal I had at my parents.  It’s a Peanut Butter Brownie Trifle.  Basically, you layer the ingredients you see in the picture and top with whipped cream.  It’s divine.

The layers of brownie and Reese’s cup are easy because you basically toss them in.  The other layer, also simple but involves a little more work, includes vanilla pudding, vanilla extract, whipped cream, and peanut butter all mixed together.  It’s decadent to say the least.  As I’ve mentioned before, I love the combination of peanut butter and chocolate so this was music to my taste buds.  You will want to stay away if you are in a super strict place, but if you aren’t, let me know and I’ll pass along the recipe to you.

“Get a life, get a grip
Get away somewhere, take a trip
Take a break, take control
Take advice from someone you know…” Come On Over-Shania Twain
Posted by Heather Wyatt