I had a feeling that the weigh-in on the scale this Saturday would be good.  I had worked hard and I was due a loss.  I got one.  I was actually down almost four pounds.  That brought me less than 3 away from my lowest weight.  I didn’t have a good weekend but my take away is that I can still lose weight if I stick to my guns.  It’s also nice to know that if I put my mind to it, I can still actually stick to my guns.  I am going to try and have a couple more solid weekends like that.  It would be so nice to be a least a pound or two below my lowest weight before the holidays.  That is my new, tiny, short term goal.  I know I jumped right in there so I hope that you had a nice weekend.  Mine was jam packed with activity but it was nice.  I got to hang out with Jordan, go to Chattanooga to see my family and meet my new cousin and have way too much food.  I had a bread and dessert meltdown of epic proportions but it’s all good.  The 553rd cup of 70 calorie Chicken & Stars Soup at Hand I just had was punishment enough. 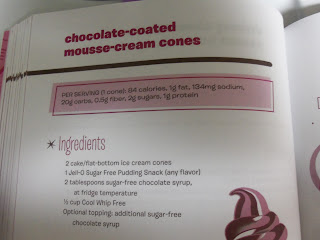 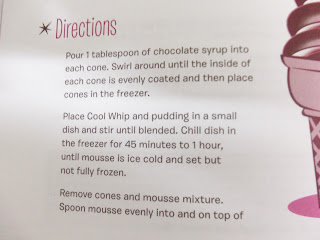 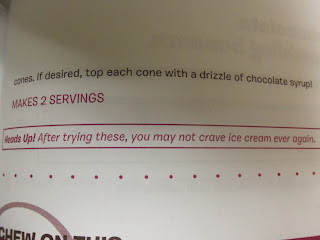 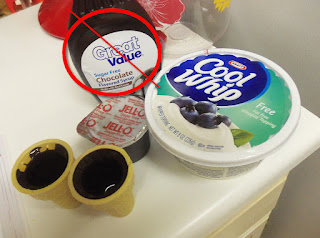 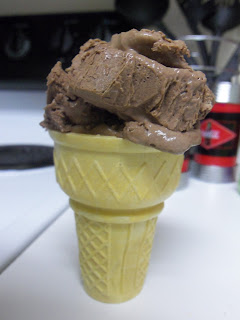 There are some foods that are Sugar Free or Fat Free that I can live with.  Then there are some that just don’t work.  I happen to believe that all versions of Fat Free dressings, sour cream and mayo are disgusting.  It’s just a fact.  I cringe just thinking about the taste of Fat Free Mayonnaise.  Apparently, Sugar Free Chocolate Syrup is on the list of ‘never eat again’ foods.  Granted, I bought the off brand AND it was a month out of date but it will be quite some time before I can look at a bottle of Sugar Free Chocolate Syrup of ANY brand.  I loved the concept of this recipe.  You take the chocolate and freeze it to the inside of the cone so it tastes like a regular chocolate lined cone.  I also like the idea of mixing the pudding and whipped cream and freezing it so it resembles ice cream.  Without the syrup, I think I would have been fine.  I had no idea those tiny cones were so low in calories.  It’s good to know, though.  I can eat way more of those.  The syrup tasted like sour feet with a hint of chocolate.  Here’s what’s truly crazy.  I ate all of it but a couple bites even though it was nasty because I had counted those points.  I mean, seriously.  Not only am I cheap with money, but I’m cheap with points, too and there was no way that I was going to let this cone defeat me.  Towards the end, though, I couldn’t take it anymore.  I threw the bottle of syrup away immediately.  Maybe one day, I can try Hershey’s and make sure to eat it before it expires but that day may take awhile. 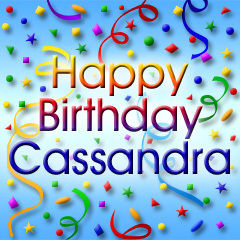 I wanted to take a moment and wish my roommate and BFF, Cassandra a WONDERFUL AND HAPPY BIRTHDAY!!! She will be celebrating her birthday this week, on Thursday. Have a good one, Cass, can’t wait to celebrate!

As an aside, here’s a quick restaurant tip.  I know that when the nutrition facts for a restaurant aren’t online and you aren’t sure what kind of damage you are doing, it’s hard to cope.  I also know for me that when I have an occasion or a friend wants to eat at a certain place, I tend to just assume I can’t eat anything healthy and just throw in the towel and eat what I want.  This week, I am going to try not to do that.  I am having dinner with a friend at a Japanese place.  Remember, you can always get steamed rice instead of fried.  Also, substitutions can happen in many restaurants.  You can ask for your food to be cooked in no oil or butter.  You can get wheat pasta at several places (definitely at Olive Garden) and you can often order the lunch portion instead of the gigantic dinner portions some establishments serve you.  My point is that even though you may not have a perfect idea of what you are consuming, you can make better choices so the damage won’t be that bad.

That's all for today.  Football season and more English classes are headed my way so the fall is looking extremely exciting and busy.  I'm sure I'll be sharing more as the chaos begins.

In the meantime, Roll Tide!

Bye!
“There's mistakes that I have made, Some chances I just threw away, Some roads, I never should have taken, Been some signs I didn't see, Hearts that I hurt needlessly, Some wounds, That I wish I could have one more chance to mend, But it don't make no difference, The past can't be rewritten, You get the life you're given, Oh, some pages turned, Some bridges burned, But there were, Lessons learned.” Lessons Learned-Carrie Underwood
Posted by Heather Wyatt