Hey there, everyone.  I’d like to apologize again for my lack in posting last week.  I’m sure the tens of fans I have out there were devastated. I’m back today, though and I’d like to start by giving a giant ROLL TIDE!!!!!  If you had told me at this time last week that Alabama would be at number 2 and poised to be in the national championship game, I would say that you were living in a fantasy world. Obviously, Bama has to beat Auburn and then Georgia (which will be a much more difficult challenge) in the SEC championship game to get there but the point is…we are back in!  Jordan and I went to the beach this past weekend and I weighed before I left.  I was about the same, maybe up a few ounces.  I am exercising vigorously and dieting most of the time but between football season and now the holidays, it is becoming more and more difficult not to gain.  I have moments of discouragement but I am still committed.  I hope to maintain until the end of the year and then do a major re-charge when 2013 begins.  I like my new food pyramid based diet but at some point, I need to work on finding more diverse recipes to keep the variety going. 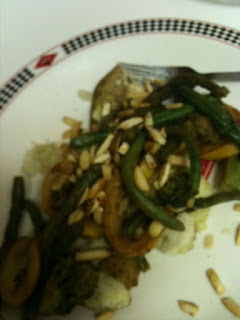 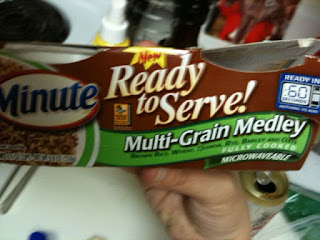 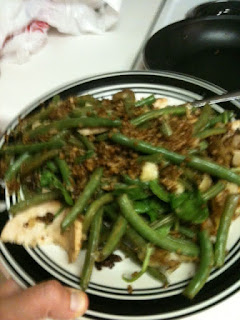 Like I said above, I have been a good girl and eating my vegetables but I haven’t really made an effort to branch out in the WAY I eat my veggies.  I also eat the same ones over and over.  I have probably eaten my weight in green beans over the past few weeks.  While I love green beans, there are only so many ways you can have them.  The next few weeks of recipes will be examples of ways I’ve tried to spice up the standard ingredients I’m supposed to have.  I have noticed that I add most concoctions I make to potatoes.  The first picture is a combo of sautéed green beans with onions, spices, W sauce and topped with almonds.  That seems to be the most typical way I’ve been having my green veggies.  The next two pictures are parts of another green bean dish I made.  This time I used minute rice.  Typically, I find minute rice pretty gross.  However, when you mix it into a stir fry type dish, it’s not so bad.  I bought the multi-grain kind which included quinoa.  I had never tried it before but it pretty much just tastes like rice.  The best part about this diet is that you do get a ton of food.  Veggies are not just good for you, they digest better.  They treat your stomach with much more respect than processed foods do.  However, my mission is to now challenge myself to change it up some so I don’t get bored.  Boredom in the food you eat is one of the most dangerous things that can happen to a diet.  Like I said, I’ll give this diet a fair shot and if it doesn’t work, I’m going back to Weight Watchers but it hasn’t had time to get a fair shot yet because of all the bumps…we will see what happens. 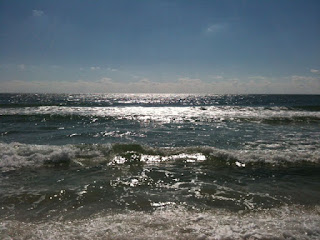 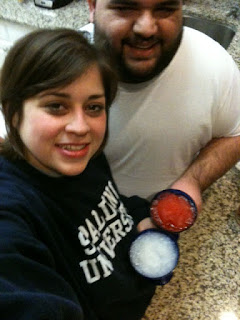 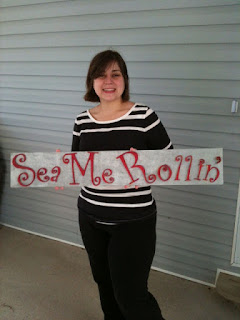 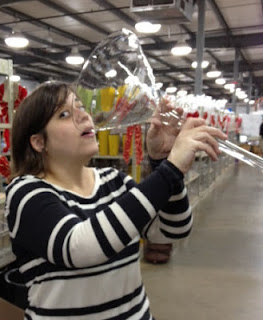 Jordan and I enjoyed a long weekend at the beach.  Thanks to my friend Nish for allowing us to stay at her beautiful home in Gulf Shores.  We did a whole lot of eating and relaxing.  I think my butt is permanently molded to the couch.  I watched football all day Saturday.  It was nice to have some down time.  We also went to Old Time Pottery on the way out.  I guess the last time I went there, I was a small child and I didn’t have appreciation for its wonder.  I was overwhelmed with the craft stuff, the kitchen gadgets and the holiday decorations.  I truly think I could’ve spent hours in that place.  I had to get out.  The picture of me with the giant martini glass is in there.  I was happy to see there’s one a bit closer to me near Birmingham so I’ll definitely have to make more visits.

It is so important to change up your diet and workout routines to keep your body active and prepared to lose weight.  If all it took to lose weight was dedication to exercise, I’d be skinny as a rail but unfortunately, you have to have a combination of good diet and exercise.  In the spirit of muscle confusion, I have been trying to change things up again.  I seem to find the exercises that mix up cardio and muscle work the most effective.  I have tried a circuit that includes quick movements like jumping jacks and squat jumps but also has toning actions like pushups and crunches.  You do a series of exercises and once you complete the circuit, you do it twice more.  The best part about this is you can do it all from home.  I have also been doing the same workout that Jessica Simpson supposedly did when she was preparing to play the role of Daisy Duke in the Dukes of Hazard.  This workout also consists of short sessions of different cardio and toning exercises.  This one is a bit intense so I’ve only been doing it once a week and less crazy workouts on the other days.  It takes me about an hour and a half to complete but it’s pure and cleansing.  I feel great when I’m done.  I hate the process of exercise.  I hate getting up in the morning, I hate the motions as I’m doing them but I work out every day and so every day that goes by, I know I accomplished something that contributes to my well-being and that is a nice feeling.

That’s all I had for this week.  I hope you all have an amazing Thanksgiving.  I am so blessed and I am truly thankful.  I am most thankful for my friends and family.  There are so many people less fortunate than I am and I tend to take that for granted.  Enjoy the people you love the most in life!  We only get one shot at this! Talk to you next week and ROLL TIDE!
"We can load what we own in the back of a U-haul van. Couple modern day Moses', searchin for the promised land. We can go four hundred miles before we stop for gas.  We can drive for a day, and then we'll take a look at the map. Heads, Carolina Tails, California. Somewhere greener, somewhere warmer. Up in the mountains, down by the ocean. Where? It don't matter, as long as we're goin' Somewhere together. I've got a quarter. Heads, Carolina Tails, California.” Heads Carolina, Tails California – Jo Dee Messina
Posted by Heather Wyatt