Hello, y'all. I hope your Monday was great. I know I usually post on Monday but stuff happens and it's Tuesday.  I'm behind so I will jump right in. I have been doing Insanity for a little over a week now and I took my measurements this weekend. So far, I've lost 2 pounds and 2.25" total. This means that I've lost 5 of the 15.2 pounds I need to lose as my first 2013 goals. 5 down, 10.2 to go. I am satisfied with these results. Insanity is tough but effective and I'm being a good girl when it comes to food. I won't use the word perfect in reference to my behavior on the weekends but I'm pretty close...at least when it comes to calorie intake. I am definitely going to keep up with the results and fill you in. I hope whatever life changes you are determined to accomplish in 2013 are on track. 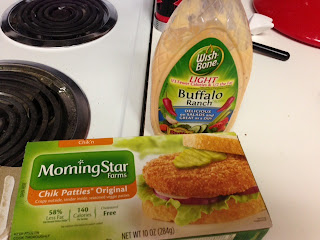 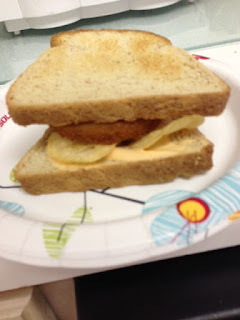 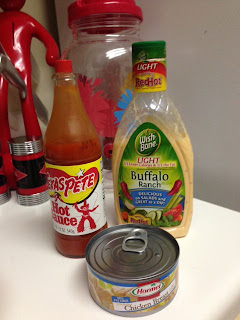 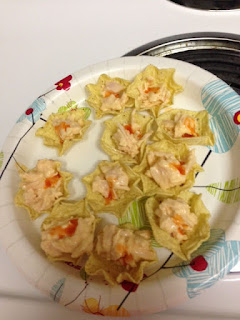 The star of this week's recipe chit chat is a Light Ranch that I've discovered. It's got a buffalo flavor and I'm quite fond of it. In the first pictures, I take a Morning Star "chicken" patty and make a buffalo chicken sandwich out of it. No, those patties don't taste like chicken but when you add bread, dressing and fat free potato chips, it's quite tasty. I'm even more proud of the second concoction that I came up with. I call these Buffalo Chicken Bites and I made them up all by myself. I took canned chicken (if you aren't into that, you could use deli meat or pulled rotisserie chicken), mixed it with one serving of the Light Buffalo Ranch and put a dollop into baked tortilla scoops. I added one drop of hot sauce to each scoop for a little extra kick. I found it quite delicious! 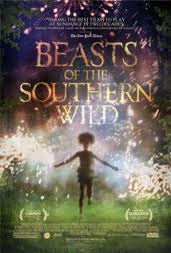 In Oscar news, I watched Beasts of the Southern Wild this week. I like to say that this movie is this year's Tree of Life. Honestly, it's not nearly as trippy and hard to follow but I draw the parallel because there are several bizarre moments in the movie that I truly don't understand. The premise is interesting because it's based on a real group of people that live in a rural, mostly flooded part of the Mississippi Delta. The movie did prompt me to do research and it's definitely molded after a real group of people. I discovered that there is a documentary about these people and quite honestly, I think I would've rather seen that. The story is sad and very raw in it's scenery, make up and content. The young girl in the movie is fantastic but overall, the point of the movie escapes me. It's weird and gross and wasn't my favorite. 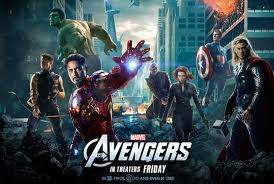 The Avengers wasn't nominated in a major category but I thought I'd give it a shout out because I've seen it and it's nominated for visual effects and I think it's deserving. I don't always run to go see movies like this but I wanted to mention it because it was hilarious and fun and I'd be happy if it got Oscar love...even if it is just for visual effects.

Lastly, I wanted to let it be known that I have now seen Silver Linings Playbook twice and I love it even more than I did after the first time. It's precious. Go see it. Seriously, get dressed right now and go watch it.

I'll wrap it up out of laziness. Have a good week!

"Another day has almost come and gone,
Can't imagine what else could go wrong.
Sometimes I'd like to hide away somewhere and lock the door.
A single battle lost but not the war.

'Cause tomorrow's another day
and I'm thirsty anyway
So bring on the rain." Bring on the Rain-Jo Dee Messina
Posted by Heather Wyatt