Greetings y’all.  It’s Monday again. In fact, it’s the last Monday in January.  I have got to stop wishing time away because it seems like just yesterday it was New Year’s Day.  The immediate New Year’s Resolution I had is going well, though.  I lost 2 more pounds last week.  I have lost 7 of the 15.2 goal with 8.2 left to go.    Since I started Insanity, I’ve also lost a total of 2.75 inches so things are going well.  I ate too much between Saturday evening and Sunday night but hopefully I’ll work it off this week.  I could have done better but it’s really the first time since the beginning of the year that I’ve slipped.  The point is that dusted myself off and I’m right back on.  We all fail in something every day. You just have to get back on track.  Besides, if you were faced with something called pizza dip and then chicken stuffed with prosciutto and cheese, you’d cheat too. 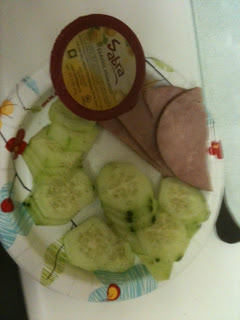 Other than binge eating, my biggest problem in the diet game is completely mental.  I have to convince myself that I’m not hungry.  I do this by making sure that I never go more than a couple hours without eating.  In order to do this and not balloon up, you have to have snacks that are healthy and filling.  This first image is of cucumbers and hummus.  I love bread and hummus together but the bread is loaded with carbs and the hummus can be a bit fattening so having both isn’t something that’s recommended.  So, we must make sacrifices and I find this snack to be a good compromise.  I found these individual servings of hummus which are great because the risk of eating too much is diminished.  I used a cucumber instead of bread because you can have as much as you want for zero points and they are pretty filling.  I also had ham on the side which is of course optional but I needed some protein.  I’ve had this several times and I’m not tired of it yet so that’s good. 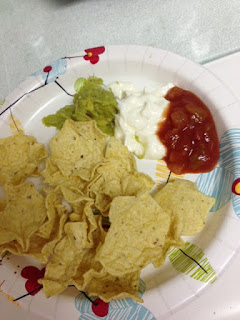 This picture is very simple but something not to forget.  Salsa is something that you can have unlimited amounts of so I eat it a lot.  I also discovered recently that guacamole and low fat sour cream aren’t too bad in points either so I created a little snack fiesta with Baked Tostitos Scoops.  I mix all three together and it’s quite tasty.  You have to be careful with the guacamole and sour cream though and only have a couple tablespoons of each.  My problem is I want to eat the whole container.  Just make sure if anything has fat in it, you only eat the recommended serving.

So, as many of you know, I’m addicted to Pinterest.  The next series of images will tell a tragic but quite funny story of a cookie project gone horribly wrong.  The first picture is how the cookies I attempted are supposed to look.  The pictures after that are several attempts that I made to mimic the image.  I got Cassandra to make one and hers at least had good shape.  You take sugar cookie dough, shape it like a heart and leave a hole in the middle.  After that, you put Jolly Ranchers in the middle to create a stained-glass effect.  The cookie kept creeping over the candy.  I kept making them bigger and bigger thinking that would help…but it made it worse.  The last picture was the closest I got but I gave up because after over 2 hours of trial and error, I was over it.  I should’ve known a project to celebrate Valentine’s day would turn sour. 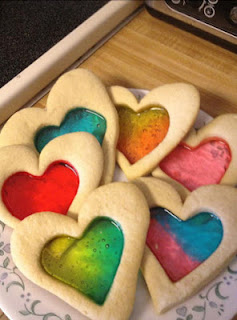 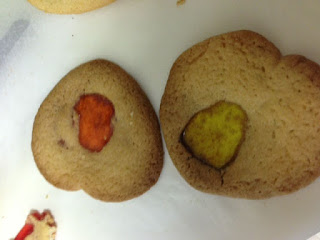 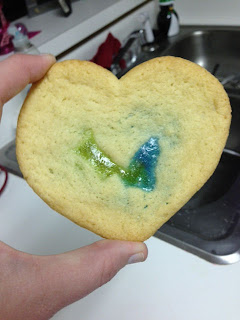 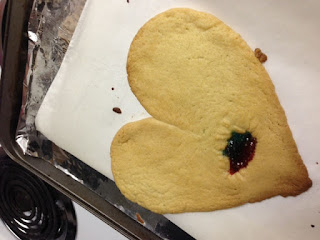 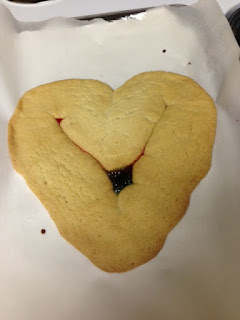 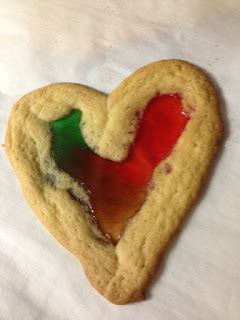 That’s all I’ve got today.

Hopefully my weigh in Saturday won’t be too harsh after my weekend indulgence.

Have a great week.

“It’s getting late
To give you up.” Toxic-Britney Spears