Hey y'all.  There will be no post next week because I will be in Denver with my parents.  I'm sure I'll have lots of pictures to share when I get back.  I'm looking forward to it.  I was up a bit on the scale this week.  I realized the scary part of all of this isn't the number on the scale, it's my attitude.  I'm having a hard time caring about any of it.  I went to the gym this morning and I've got all this exercise planned that I'm sure I'll do but I have zero confidence in my body or my ability to lose weight.  Super inspiring stuff, huh?  The good news is, I really do feel like I'll figure this slump out.  It just may not go according to the rigid timelines I implement for myself. 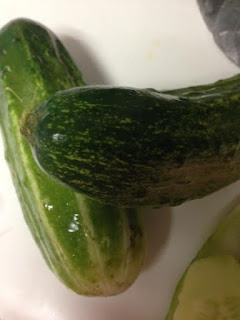 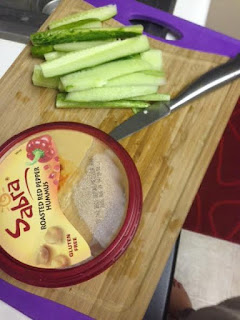 As I mentioned last week my Grandma provided some fresh produce on my trip to Chattanooga.  In addition to the mounds of squash I received, I also got a fair amount of cucumbers.  The first thing I did was go the simple, traditional route and chopped them up in a fry shape to dip it in hummus.  It's an easy, filling snack.  It's nothing new but it was the first thing I made with my cucumber collection. 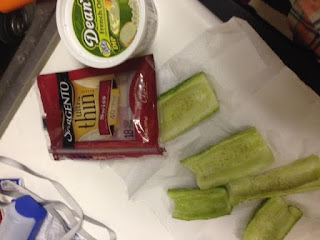 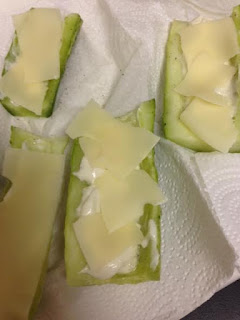 I took some of them and made a couple cucumber boats.  I stuffed them with low fat French onion dip and Swiss cheese.  It's funny how just altering the shape of a vegetable makes it more interesting. I was running low on groceries but you can fill up your cucumber boat with pretty much anything. 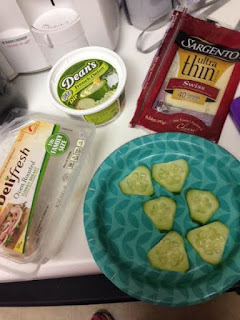 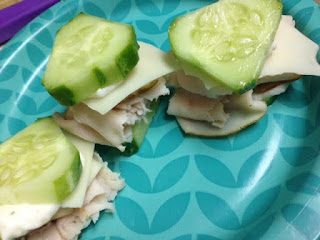 I also used the dip and Swiss and added some deli meat to make some mini sandwiches.  I rekindled a love for Swiss cheese.  It paired nicely with the cucumbers.  Don't let Pinterest fool you though, cucumbers are NO substitute for bread.  It did make for a nice snack though. 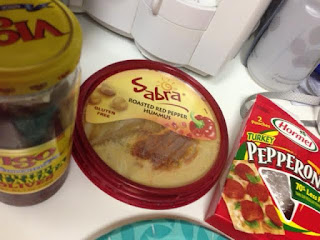 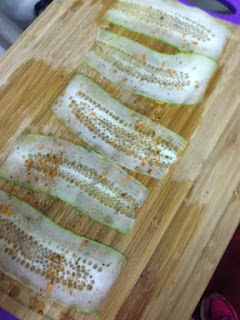 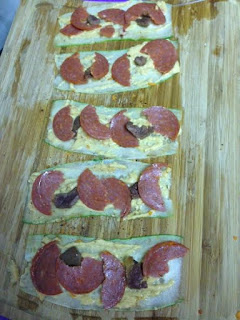 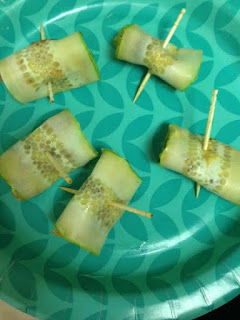 My favorite recipe was a bit more labor intensive than I would have liked but by far the most delicious.  All I did was use my fancy tool that makes vegetables super thin and topped the slices with spices, hummus, pepperoni and olives.  I rolled them up, popped a toothpick in them and enjoyed.  They were the perfect little bites, full of flavor.  It took me way more time to make them than it took to eat them but that's the case with most food that I eat.  Still, I recommend them because they were yummy.

I'd like to give a shout out to my very good friend David Earp.  He's in the hospital facing scary tests, numbers and a haze of insecurity.  I love you David and I hope you feel better instantly!

I hope you all have a wonderful weekend!