Happy Monday y'all! I'm happy to report that despite my best efforts to each too much last week, I stayed the same weight.  I'm guessing it had to do with the constant rigorous exercise.  I'm going to Colorado in two weeks so I desperately want to drop at least a couple pounds before then so I can gain it all back with what I'm sure will be a vacation binge frenzy as always.  I'm still feeling low about my diet woes.  My mental status regarding my body and food intake is shaky at best, breakdown level at worst.  Still, I march on.  I will say that since it was a holiday weekend and my Dad's birthday, my overall analysis of my caloric intake is "it could've been worse."  I will take that.  As for today, it's been hard to stay motivated but so far, so good. 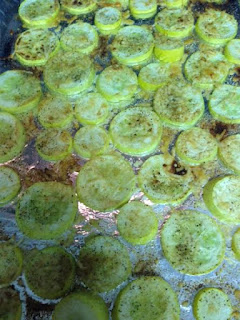 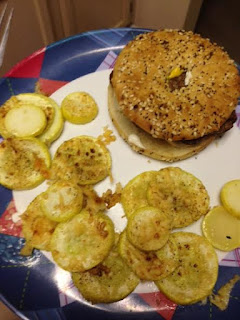 When I took a trip to Chattanooga a few weeks ago, my Grandmother loaded me up with both fresh and canned squash from her garden so I immediately whipped it up in several different ways because it is one of my favorite carby veggies.  Sure, it's no broccoli but it has fiber, it's low in calories and it's a perfect vessel for flavor.  The first recipe was simple but it might have been my favorite.  All I did was spray a pan with Pam, add slices of squash, added salt, pepper, a little parmesan and some more spray and popped it under a broiler. The bit of cheese made it crispy and flavorful and it went great with my burger that I make all the time.  It took about five minutes so you can't complain about that either. 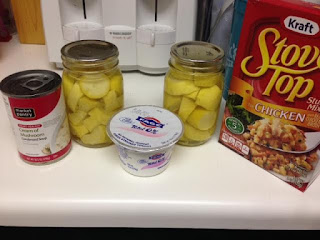 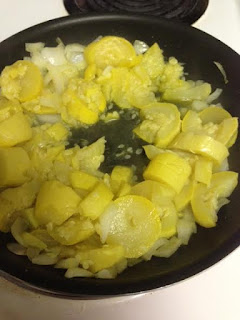 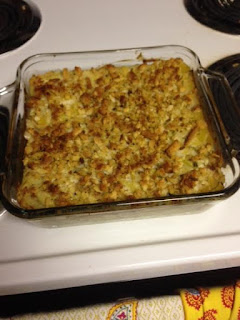 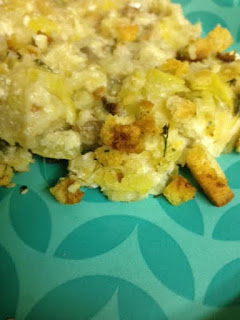 I used the canned squash to make something I had never tried before...a squash casserole.  Casseroles are often high in calories so I went on the hunt for something I could eat and not feel guilty about.  I ended up with a recipe that used non-fat Greek yogurt, the heart healthy cream of mushroom soup and boxes Stovetop stuffing.  It couldn't have been easier.  All I did was sauté the onions and squash for a bit, mixed them with the cream of mushroom and yogurt, folded in a bit of stuffing, threw it in a dish and added the rest of the stuffing to the top.  I baked it and when it was done, it was all bubbly and ready to eat at about 122 calories for roughly a half a cup.  I ended up eating a huge portion because I was basically eating it for my dinner.  The first servings were great because they were straight out of the oven.  The light ingredients didn't leave an aftertaste and I thoroughly enjoyed it.  The leftovers weren't as good. The stuffing got mushy and the entire thing became a little dense and gummy.  I would say it's an awesome recipe for someone trying to cut calorie corners around Thanksgiving but next time, if I'm just cooking for myself, I'd cut the recipe in half so I didn't have to eat leftovers. 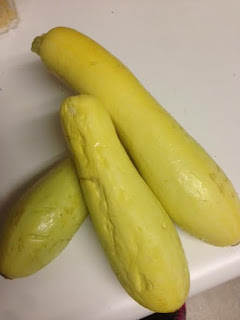 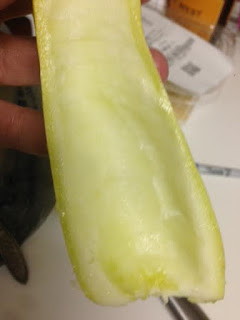 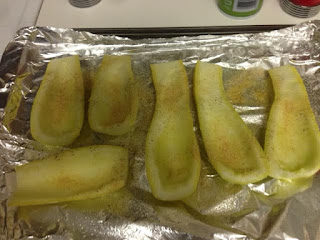 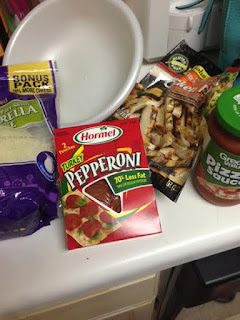 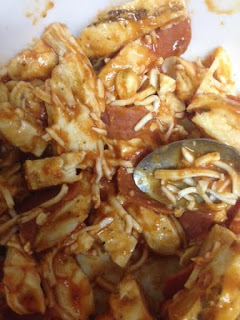 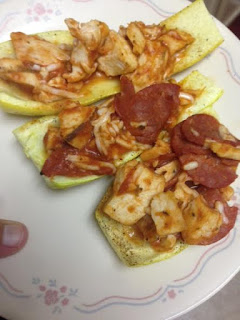 Finally, I threw together what I called Pizza Boats.  I used the rest of the fresh squash I had, cut them in half and scooped out the insides.  I added salt, pepper and garlic and broiled them on a sprayed pan for a few minutes. I pulled them out of the oven then stuffed them with a mixture of chicken, turkey pepperoni, pizza sauce and low fat mozzarella cheese.  I baked them for a few more minutes and boom, they were ready.  I got to have a ton of flavorful food with this recipe and I would definitely make it again. 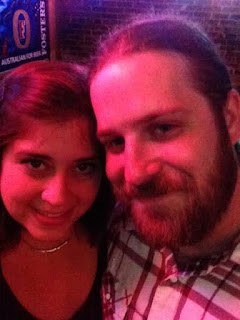 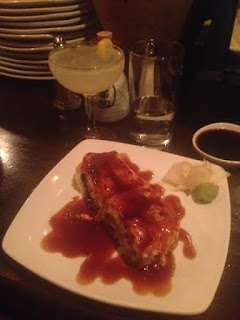 Ian and I had a date night a couple weekends ago and had sushi.  It's something I've grown to love over the past couple years.  Of course, I tend to love ones that have fried shrimp, or tempura rice or cream cheese so they aren't exactly healthy but I actually crave sushi now which I never thought would happen.  Ian even liked it and he is VERY picky.  My goal is to try and find more sushi I like that is a bit less caloric. Have a great week, y'all!