Hey y'all! Roll Tide! Also, shout out to ALL vets out there! Happy Early Veterans Day. Thank you as always for your service. I had a fantastic weekend. Alabama dominated and I just had a fun, relaxing weekend all around. I am pleased to admit I had my first perfect dieting week in awhile. I even took sandwiches to tailgate so I had a small sandwich before and after the game. It allowed some wiggle room in the drink/snack department but I never went over. It felt amazing to do the right thing. It also showed on the scale. Sadly the number I got when I weighed Saturday is probably skewed because I either had a touch of a stomach virus this week or I got a little bit of food poisoning from something I ate (possibly the soup I'm about to show you...but YOLO, right?) I was down almost 5 pounds which is a lot so if I go up this week, I'll know it's because I'm balancing out from being sick to my stomach for 4 or 5 days in a row and not because I did something wrong. Here's hoping I carry the "being good" trend into this week. I'd like to get down a few more before Thanksgiving. The important thing is, I felt kinda pretty on Saturday for the first time in weeks and I could definitely use more of that feeling. 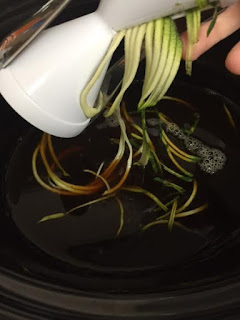 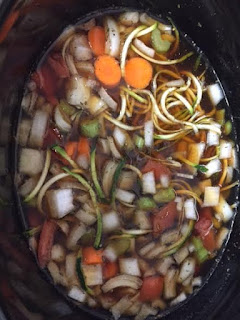 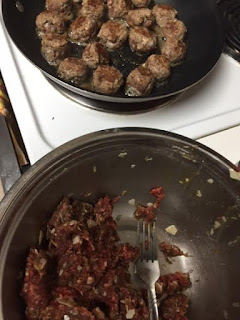 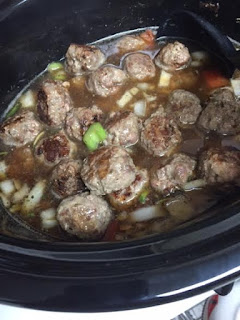 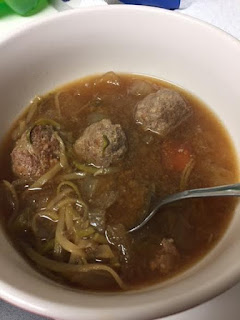 This past week I made Italian Meatball Zoodle Soup. This was another crock pot recipe. The base of the soup is pretty much beef stock and veggies. It included zucchini (in which I made into "zoodles"), celery, onion, carrot and tomato. You pile all of the veggies in with 32 ounces of beef stock (add some garlic salt) and turn the crock pot onto low then cover it. After that's done, get a bowl out, mix together 1-1/2 pounds of lean ground meat with six cloves of garlic, 1/2 cup parmesan cheese, 1 egg, parsley, sea salt, onion powder, Italian seasoning, oregano and black pepper. Heat a skillet on low to medium that you've sprayed with non-stick spray, turn the beef mixture into small meatballs and heat them in the skillet for a few minutes, browning them on the outside. Drain the fat. They don't have to be cooked all the way because once you've done that, toss them in the crockpot and let that thing go for 5-1/2-6 hours.


So, I'm one of those people that operates MUCH better with a recipe. In this recipe, it didn't tell me to drain the fat from the meatballs...so I didn't. I did consider it because my instinct told me to do so but it wasn't in the recipe so I left it out. Even though I used very lean meat, I think the grease in the soup is what made me sick. I also ate it several times in a row. Ian had one bowl but I think that was only because he wanted to make me happy. There were 12 servings in the pot and for one person, it's just too much. I detest wasting food so I kept trying to eat it and eat it which kept the ball rolling on the sick stomach thing. It tasted delicious. My only complaint was that I think the broth was a little too salty. Coming from me that says a lot because I'm a salt person but if I made it again, I'd get low sodium broth. I ended up chunking the rest of it away yesterday which made me feel horrible because I feel like I'm throwing away money but it looked gross. The fat had separated so I got rid of it. I didn't want to be sick anymore. What's funny about me is that thrown away food will haunt me for awhile. So, if you decide to make it (it's good, I promise), drain fat from the meatballs and use low sodium broth. You can use whatever veggies you want. 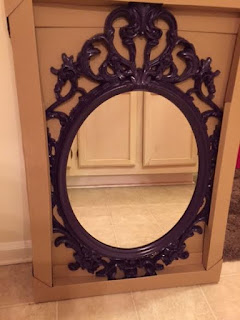 I have to give Ian a shout out this week. He looks at my Pinterest boards sometimes for ideas and ways to surprise me. He saw something I had pinned, collaborated with his mom, she made it and he went to pick it up yesterday. It was this gorgeous, purple mirror. I didn't even do anything to deserve a present, haha but I guess those are the best kind.


Alabama is playing away this weekend so I'm going to stay away from all tempting tailgate fare. Here's to them beating Mississippi State!