A Tiny Taste of Cuba

Hey y'all. It's a very Monday-ish Monday today with assorted ups and downs. The world is still a crazy place with violence and opinions and it doesn't look like the tension is going anywhere. So, I am still going to talk about food and how hard it has been for me not to gain weight the past year and a half because my problems with that don't seem to be going anywhere either. I have mental barriers placed strategically all around my brain that are working against me. Then, last week, after going almost 20 miles on foot and kickboxing 4 times over the course of seven days, not only did I fall yesterday while running in 100 degree weather, I gained two pounds. I kept my food in tact all week too so you know, whatever. I haven't lost weight in months. But, somehow, here I am again today, working at it again...taking it one day at a time...hoping something changes. I know that's not exactly uplifting but I don't feel uplifted. I feel beaten down by my brain and my body. I haven't and won't give up though. 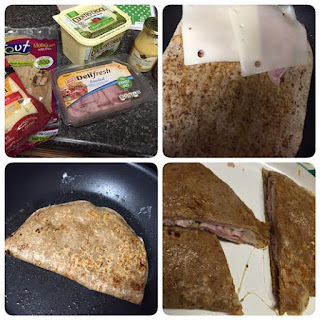 It's hard to transition from the gloomy intro into talking about Cuban sandwiches but I'm going to do it anyway. I LOVE a Cuban sandwich. Mostly, I love pork, cheese and spicy mustard. One thing that makes me a Cuban sandwich loving impostor is that I hate pickles so I can't be called a true fan I guess. During my first week of Blue Apron, they sent us Cuban sandwiches that were delicious but a little high in calories. I wanted to whip up a quick Cuban inspired lunch that would cut the calories in half. So, I took a low cal/carb flat bread (use whatever kind you want), added a tablespoon of light butter to a skillet and placed the wrap in it, added ham, ultra thin sliced Swiss and a combo of stone ground mustard and deli mustard. It was delicious and only a few hundred calories! Since I made it at home, I saved money and didn't have to tell a server at a Cuban restaurant "no pickles" and have them sneer and say, "that's not really a Cuban." It's also nice to do it in the skillet with just a little bit of the light butter to give it a bit of a grilled cheese vibe. 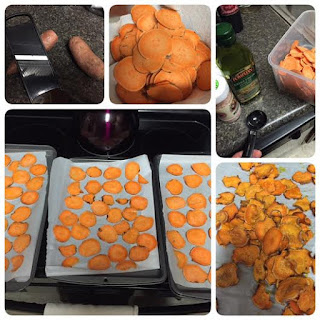 I am not the biggest fan of sweet potatoes. I like sweet potato fries in many cases but that's about it. I try to eat them like a baked potato but I just can't get completely on board. I had a couple lying around but I was having trouble finding motivation to eat them. Then I decided to try to turn them into chips. I used a mandolin slicer which is handy for consistency in size. Then all I did was add a tiny bit of olive oil and salt and toss it together. Throw it in the oven and that's pretty much it. The only thing I wish I had done is leave them in to the point where they were almost burned because they weren't crispy enough. They tasted fine and when they were warm, they were satisfactory but they didn't keep well. I was over it the next day. Not a rave review. Maybe someone has better sweet potato tricks? 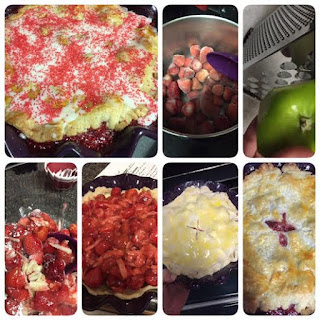 Also, I volunteered to make dessert for Sunday dinner last night. It's not healthy but I wanted to share anyway. I'd never had strawberry pie and this is a Pinterest inspired recipe called "Strawberry Poptart Pie." I used leftover pie crust I had in the freezer. The filling requires 3 cups of cooked strawberries, 3 cups frozen, 1 grated granny smith apple, corn starch and sugar. Bake it and then combine powdered sugar with vanilla and drizzle it on top. Oh and the best part...sprinkles. My only regret is that I wish I had eaten the pie when it was still warm. Overall it was tasty though! 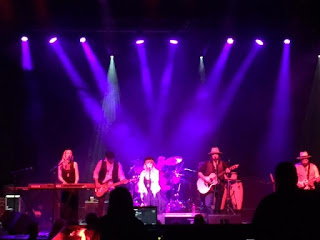 Dad and I went to see a Fleetwood Mac tribute band on Saturday. Other than some sound issues and a bit of diva behavior from the lead singer, it was a fun night. It was a nice weekend overall. I hope you all keep your head up out there and have a great week!
Posted by Heather Wyatt