Day in the Life when I'm Doing it Right

One day it's Christmas and then POOF, we are over half way to February. I am guilty of wishing time away but noticing how quickly it goes, it makes me want to change that and not just go through the motions of life. It can be hard sometimes. Now that I'm back in school, I'm looking to quick food solutions so I admit that sharing products with you today rather than a recipe is simply because I haven't made the time to cook. I will make sure to change that for next week. Even though I would rather show you a fully home-cooked meal where I meticulously weigh protein, measure ingredients and count calories, I have to say, I have been eating pretty well with shortcuts. In fact, I dare say I've been a picture of calorie maintaining perfection so far this week. The end of last week and the weekend weren't too shabby either. I finally weighed on Friday the 13th and found out I gained around 6 pounds over the holidays. It's not lost on me that I waited two weeks into the new year to weigh which means I probably gained more than that but who's counting, right? In terms of healthy eating, I've got a positive attitude right now. I've decided to weigh monthly so as not to get obsessed. That means on Valentine's Day morning, I will hopefully see some fruits of my labor but I'm trying not to hope for too much. My goal is to lose 5 pounds this month and I think that is manageable. I'm all about small goals. If it's more, great but if it's not, I need to keep going. I already feel better and I plan ahead so I don't let myself feel deprived. I know how fickle a mindset can be so I'm rolling with my dedication and positivity right now. We shall see how it goes. It is a new year after all. 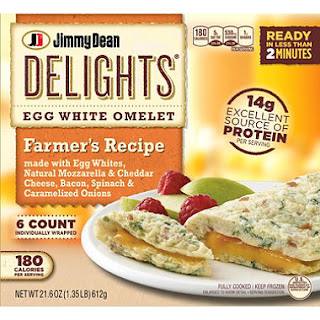 I wanted to first show you something my Mom gave me. Breakfast on the run is a real thing and it's helpful to have frozen alternatives to turn to. Yes, an ideal breakfast would include freshly made eggs or a warm bowl of homemade oats but sometimes, you have to shove something in the microwave while simultaneously trying to put pants on. Jimmy Dean makes some nice sandwiches but they also make a Farmer's Recipe Egg White Omelet. My mom got these at Sam's and at 180 calories, they are awesome! I made one piece of low cal toast and plopped this guy right on top. It took almost no work and as my mom pointed out, cheese normally gets lost in a frozen breakfast but that is not the case with these. There's a sizable slab of cheese and the rest of it tastes good too. I highly recommend them. 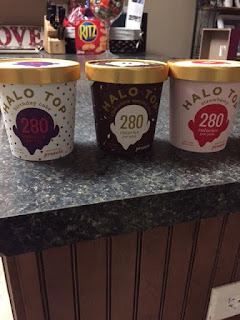 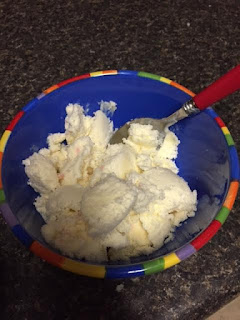 So, I finally got my hands on Halo Top Ice Cream. I have heard about it for months. Tuscaloosa finally got some in and didn't sell out before I got to them. If I'm correct, I think the only places they are available in T-Town are Manna Grocery and Cravings. I bought three pints and I'm ashamed to say my total for those 3 was over $24! I couldn't believe I forked over my credit card for that because that is outrageously expensive but if it tastes like ice cream and doesn't have a ton of calories, it's worth it, right? At this time, I've only had the birthday cake and the strawberry. The strawberry was OK but for some reason, I got a medicinal taste from it. The birthday cake had awesome flavor and while it has a weird texture, it does have a creamy mouthfeel (which makes me giggle to type). The best part is that giant bowl of ice cream in the picture is only 140 calories. Does it taste like Ben & Jerry's? HECK NO. Is it a good alternative? Yes. I know sweeteners are the devil and what not but this ice cream is packed with protein and oddly, SUPER filling. I was stuffed after I ate it and if you know me, that is absurd. The only caveat is that it tore my stomach up. I'll spare you the details. This isn't a miracle ice cream but it's one I want around I think...especially if I ever just want to eat ice cream from the pint. 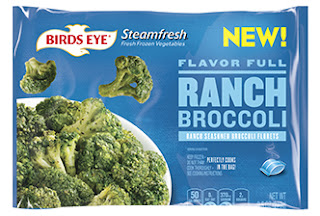 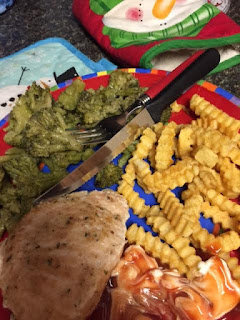 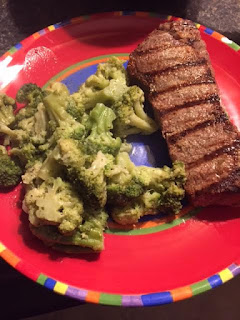 It would be crappy if I didn't give Ian a shout out for being the master of dinner making lately. I have weird hours this semester. I work at home starting around 9 or 10 am and then I have all afternoon classes. I go to class and then workout which means I get home RAVENOUS around 7. He has dinner ready for me every night. Ian doesn't do a lot of cooking but finds it easy to grill or bake a protein and then pop side dishes in the microwave. Fine by me, especially if I don't have to do anything but eat. One thing I've been chowing down on is Birdseye Ranch Flavored Broccoli. The buffalo cauliflower was a bust but the ranch broccoli has a nice tang to it. The whole bag is 150 calories and goes well with anything. In the first picture, Ian made Chicken Venezia (which is stuffed with spinach, ricotta and parmesan) that we bought for $3 a piece at Fresh Market. All he had to do was bake it in the oven around 30 minutes. He served that chicken with the broccoli (he had mac and cheese) and the individual crinkle fries from Ore-Ida. Then, I sacrificed carbs one night to have a giant New York Strip (purchased on sale at Fresh Market for $6.99) and the broccoli went well with that. It takes about five minutes to have a veggie with flavor to just pile on your plate. I like that kind of convenience. 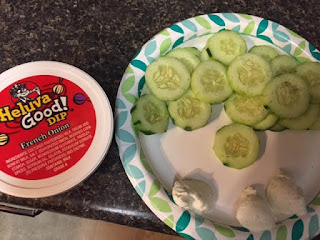 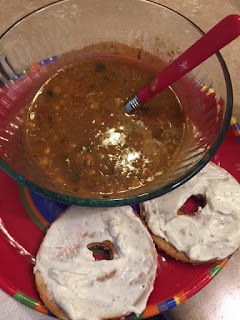 Finally, I bought some French Onion Helluva Good Dip the other day. Ian is always eating mounds of chips and ranch dip and I get jealous. I noticed this stuff was only 50 calories for two tablespoons and I've found it quite versatile. I cut up a cucumber and used it to dip in the French Onion Glory. I've also been adding it to my Everything Bagel toast as a side dish for soup. FYI, that soup in the bowl is Panera brand chicken tortilla and it's filling and DELICIOUS!

The point is, there isn't always time to cook an elaborate meal and that's OK. Processed foods aren't ideal but more and more, companies are making frozen or pre-packaged health foods that save you a ton of time. I hope you all have an awesome week and I'll be back next time!