Hey y'all! Next time I post it will already be February so time is moving quickly as usual. I have managed to stay away from the scale and even though I'm curious, I think it's a positive thing that I have strayed. I still plan to weigh in on Valentine's Day so I'm hoping my hard work during the week and slightly less hard work on the weekend will have payed off in the numbers but if not, I'll try to hold it together mentally. 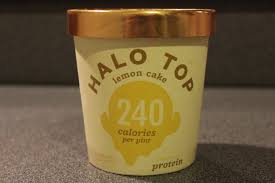 I'm going to be talking about cauliflower rice and a slightly weird recipe below so if you can't stomach cauliflower, feel free to skip. I will say, if you think you hate it but you've never tried it, at least give it a shot in a burrito bowl or something with flavor. You may not hate it. Anyway, before I get started on the cauliflower, I wanted to give a quick shout out to Carina for recommending the Lemon Cake flavor of Halo Top. Not only is it on of the least caloric flavors, it has the most similar, creamy taste to ice cream. I really enjoyed this one! I probably wouldn't have tried it without the recommendation. My freezer looks like the ice cream pint section on the freezer aisle at Target. 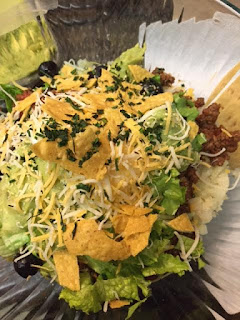 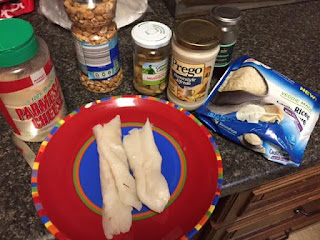 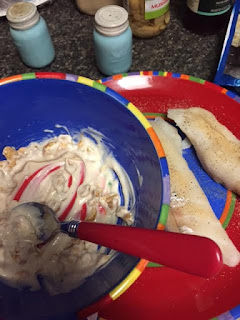 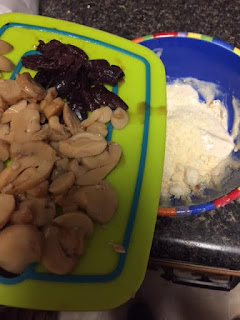 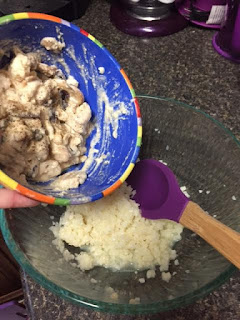 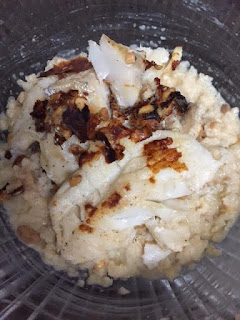 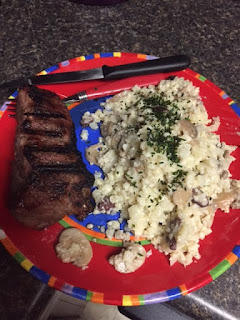 Ok, so the first picture is of a massive burrito bowl I made with cauliflower rice. It's nothing I haven't made before but this night I was ravenous and I got to eat this huge bowl for around 5 or 600 calories. It's got the pre-made cauliflower rice, lean beef with taco seasoning, salsa, guacamole, olives, a tiny bit of sour cream and cheese for the top and 2 crushed tortilla chips. I also sprinkles some chives on there to be fancy. Y'all. It was so good.

One other recipe that I made last week involving cauliflower rice horrified Ian to his core. He hates fish, cauliflower, olives and mushrooms so when I told him what I had for lunch he lost color in his face and only managed to get out a meagre, "Ew." I got some Alaskan Cod on sale at Fresh Market and prepared it by seasoning with salt, pepper and garlic powder and then I coated it in a mixture of jarred Alfredo and chopped peanuts. I added it to a non-stick skillet and cooked a few minutes on each side. To go with it, I heated up some cauliflower rice, which was already flavored with Italian Cheese (I didn't see that on the bag when I bought it). In a small bowl, I combined jarred Alfredo, grate parmesan, garlic powder, salt, pepper, mushrooms and Greek olives. When it was all combined, I mixed it with the cooked cauliflower and then heated that up in the microwave for about a minute. Look, I'm not obsessed with jarred Alfredo or anything but it was leftover in my fridge and it's only 35 calories for a couple tablespoons. It adds a creaminess to the cauliflower so it had a mushroom risotto vibe to it. I served it with a big pile of fish on top and again had a huge lunch for between 6 and 700 calories. The kitchen smelled like cod for awhile but it was worth it. I used that same recipe for cauliflower rice to go with my steak last night. Look at how much I could have without feeling guilty! Plus, a healthy side meant I got to have a New York Strip. I'll take that trade off anytime.

I promise I won't talk about cauliflower rice again next week but when I say it is worth a try, I mean it. It's not just me convincing myself a diet product is good. You need to add flavor but once you do, there aren't many limits to what you can do.

Have a good week y'all!
Posted by Heather Wyatt