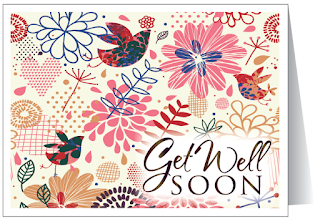 Hey y'all! It's almost April. I hate to hurry life but I'm about five weeks away from summer and that makes me happy. I'd like to first say "Get Well Soon" to my Oma! She has been in the hospital for a week due to complications with her gallbladder. The gallbladder is gone but the after effects are still giving her trouble and she is still really sick. She's having another procedure today but may have to have another serious surgery. She's a tough woman but her body is fighting against her right now so positive vibes would be appreciated! Because of our already crazy schedules and trips to the hospital, I haven't had time to cook too much so today isn't showing anything fancy. Thanks to Ian for always helping me with dinner (by helping I mean he usually does all of it). I am planning on weighing this weekend. I haven't been doing as well as I should (though I've been on track since Monday) so I really, REALLY don't want to. Oh well, it's just a number on a scale. We shall see what it says and move on from there. 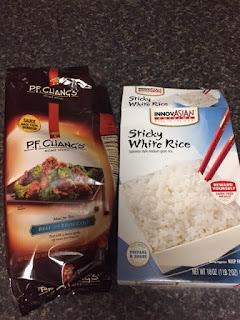 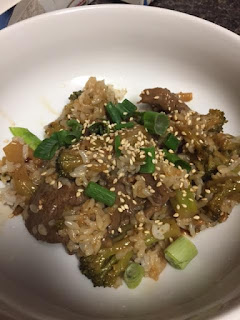 I want to show you a quick meal from the freezer section. I know it's not glamorous but when you are short on time, it's not a bad solution. I hate cooking rice so I prefer to use the sticky rice in the freezer section. It's fast, tastes great and I can't screw it up. The other discovery I made was PF Chang's frozen Beef and Broccoli. It was so good! Ian whipped it up in no time. He prepared the sesame chicken for himself and enjoyed it. I recommend it for those nights where you need something filling and fast. Sure, it's got a lot of sodium and is nowhere near "clean" but ain't nobody got time for that this week. 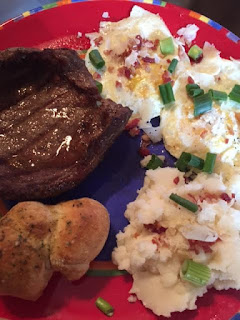 The other week I picked up thin-sliced ribeye steak. I love steak and for me, there's nothing better than a giant ribeye for dinner. Because those set me back 700-800 calories, I thought the thin ones may be better. So, Ian grilled them and I served them with fried eggs on the side (I used non-stick spray with no butter). I plopped a bit of Ian's mashed potatoes on the plate too. I really liked the steak. It reminded me of my childhood a bit. I was able to get the rich taste of ribeye for half the calories and money. 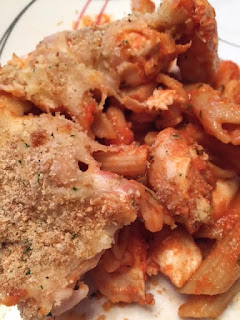 Finally, I was in charge of Sunday dinner this week while my mom was at the hospital with my Oma. My mom also had the flu last week so it hasn't been the greatest couple weeks for the Wyatt family. Anyway, I made a "Skinny Chicken Parmesan" Casserole. The only thing skinny about it was the fact that there's no butter, I used lower fat mozzarella and wheat pasta. It was still 510 calories for 1/8th of the casserole. It could have been worse but I don't know that "skinny" is the right word. I will say though, that it was super easy to make. You put the chicken and pasta in the dish uncooked with water and spaghetti sauce and bake it at 425 for 30 minutes. Stir it all around, add cheese and breadcrumbs and pop it in for about 10-15 more minutes and it's done. It was good. It wasn't life changing. So, the point is, I'm  hoping to be back next week with an actual recipe but until then, I wanted to show you what I'd been eating on the move this week.