Hey y'all! I am soooo close to Spring Break that I can taste it. Ian and I are going to Boston on Monday and I can't wait! It's making it difficult to complete the week but I'm getting there. I'll probably weigh on Friday or Saturday just to see where I'm at then wait a couple weeks AFTER vacation so I can drop a few pounds of "travel weight." 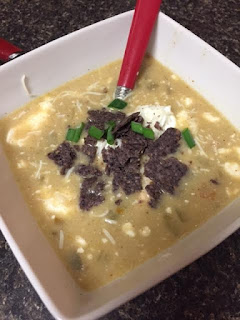 Since we are going out of town, I wanted to make something that would last a few days and use up some groceries we have rather than buying too much that could go to waste while we are gone. I found a chicken enchilada soup on Pinterest so it's not my recipe. Ian actually made it! It was a crockpot recipe and super delicious. You cook up a pound of chicken breasts in a skillet (they need to be cut into bite size pieces or you can shred them) and then toss the cooked chicken into the crockpot along with 4 cups of chicken broth, three small cans of green enchilada sauce and two tiny cans of green chills, 1-1/2 tablespoons cumin, tablespoon chili powder, teaspoon garlic powder and salt and pepper to taste. Let it go for 3-1/2 hours. At that point, add in instant rice and a block of cream cheese (cubed) and let it go another 30 minutes. We used low fat cream cheese so it didn't melt in as well as full fat would but honestly, I kind of liked having little bites of cream cheese. I think an immersion blender would have helped. We added low fat sour cream, a few crushed blue corn tortilla chips and skim mozzarella cheese. It was so filling and had awesome flavor! I think it was using the green chili sauce. I've eaten it three times and Ian has eaten twice and we still have a lot left. 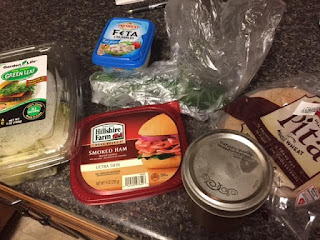 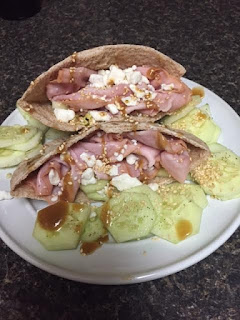 Also, I wanted to share my quick pita lunch! This isn't anything revolutionary but it was delicious and huge! I went to the Cheesecake Factory a few weeks ago and noticed that sold their "Skinnylicious" dressings. I ended up buying their sesame ginger dressing and it's really tasty. It's a bit on the sweet side but I mixed with salty feta and ham. It's only 15 calories per tablespoon! All I did was add that, lettuce, cucumber, ham, fat free feta and toasted sesame seeds. I thought it was pretty and it tasted great.

Because I'll be in Boston, there will be no blog next week. I will pick it back up on the 22nd. So, have a great couple weeks and St. Patrick's Day!

I also wanted to take a moment to wish my Aunt Brenda a HAPPY BIRTHDAY! She lives in Chattanooga and had a birthday Monday. Hope you had a great day!

Finally, HAPPY ANNIVERSARY TO IAN! We celebrated 3 years "Facebook Official" yesterday and we are going to dinner tonight. You make me happy sir and well, that's not always easy to do.