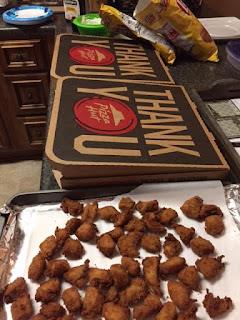 Hey y'all! It's officially March. I'm just as surprised as you. Happy Ash Wednesday to those out there celebrating. As I mentioned last week, I'm holding off on weighing until right before my vacation in order to decrease negativity and give myself a chance to shake off the few pounds I gained. The picture above is from the spread I had on Oscar night with Ian and Jordan. Despite my gluttony that night, I've done pretty well. I've been super busy which always helps my calorie intake. I went to a conference last week for writing which I've been saying was both motivating and soul crushing. The agent I met with said that I had a "tough sell," for a book called MLWOR because I am not famous. I am acutely aware of my lack of fame but feel my book deserves a chance. I figured out a lot of things I can do to work on the book and my "pitch." I have to make myself marketable so there will be some visible changes in terms of format but there will also be a number things I am doing behind the scenes to try and make this dream a reality. In the past few weeks, I posted more recipes than usual and it won't always be like that. There will be some inconsistencies so I appreciate those who have stuck with me and any new readers that I have. I'm a writer, not a marketer and in today's world, it looks like you have to be both...especially if you want to write non-fiction books about food and life. 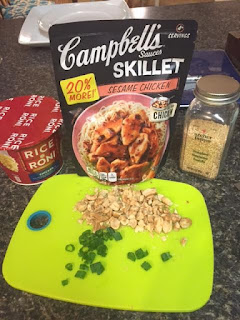 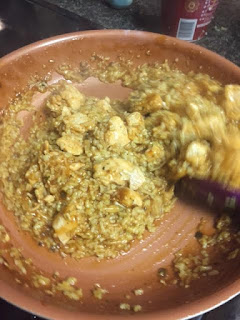 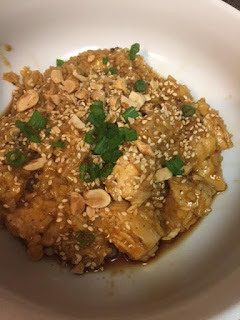 Now, having said that, I only have one "recipe" for you. Ian and I discovered these Campbell's pouches and thought we would give them a try. Ian cooks dinner most week nights and for him, the simpler the better. That's not to say he isn't becoming a great cook but he is someone who admires quick and easy recipes and you know what, I'll take it. It means dinner is ready when I get home. He leaves the creativity and more complex food to me. So, as a warning, there's nothing "clean" about this recipe. All you do, is take chunks of chicken and cook them in a skillet until there's no pink left. Add the sesame chicken sauce (there are other flavors too that we haven't tried yet) to the chicken and toss around. We used instant rice because I have a strained relationship with cooking this sticky grain. And, of course, it was a time saver. We tossed the rice and sesame chicken together. Then, because I can't help myself, I topped it with some chopped peanuts, sliced green onions, toasted sesame seeds and a bit of soy sauce (the sauce itself is already pretty salty). This was great for a family who is already on the run or perfect for a single person who worked all day and wants a hearty meal within 15 minutes. It tasted great, actually! Jazzing it up with toppings made it even better. This is definitely something we would make again.