A Week in the Life

Hey y'all! It is officially summer in Alabama. I know this because it feels like I'm swimming into a bucket of hot mop water every time I step outside. It's not my favorite season but then again, I don't like being cold either. When I went to Weight Watchers on Saturday, I was down again bringing my loss to 3.2 pounds. I was happy but I was back to my old ways starting Saturday night. I ate far too much this weekend but got right back to normal on Monday. Yesterday, I didn't plan well enough and ended up eating a Moe's burrito that was way more than I thought it would be. The point is, while I'm back to "normal" today, I fully expect to either gain or stay the same this week. This will be an interesting test for me. The good news is, I can pinpoint the exact reasons why I may not see a loss. Also, I feel good about making better weekend choices now. I need to plan better and stay positive. It's a slow process but I feel like I'm back "in it" again. Plus, I'm paying a lot of money for Weight Watchers so that's motivation too. 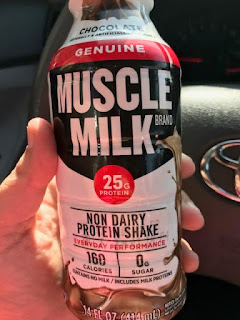 Other than being inducted into the weekend hall of shame a few days ago, I've been having nice balance throughout the week. I like to have one meal a day that "sticks to my ribs" as they say. I also like to start the day with protein. Then, for the rest of the day, I eat a ton of vegetables and lean protein. This works well because I'm getting plenty of food. I usually get protein in the morning by making eggs. On the occasion I have to be out of the house in the morning and only have 5 seconds to grab breakfast, getting protein is a bit more challenging. I decided to give Muscle Milk a try. I chose the chocolate kind with 25 grams of protein and no added sugar. As far as Weight Watchers goes, it was only 3 points. I was skeptical that a small shake could fill me up but I was WRONG. I was stuffed after drinking this and stayed full for hours. As far as taste goes, it's not exactly a chocolate shake from Cook Out but it's not bad either. I certainly wouldn't choose to have one every day but it serves a purpose when you need a quick, filling breakfast or snack. I bought a vanilla one to try next. 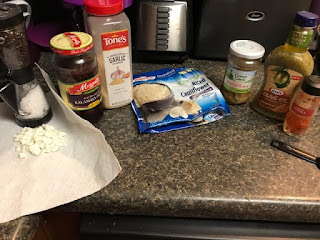 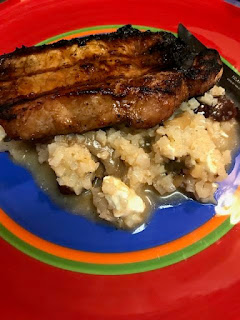 I know that I've spoken ad nauseam about cauliflower rice before and just so you know, it's still a staple for me. The two most important facts about cauliflower rice: 1) There's no need to ever make it on your own now. It's way too much work. It comes frozen and refrigerated now. 2) It needs lots and lots of flavor. For instance, last night, I mixed it with some yummy beef and broccoli I got at the store. I'm not saying it replaces rice but I really didn't it notice it when it was mixed with all that Asian flavor. When I'm making it as a side dish, I load it with Greek flavors. I add salt, pepper, garlic, smoked paprika, Greek olives, a lighter, olive oil based dressing and fat free feta crumbles. Ian grilled pork chops one night and I had it with the rice and even though it wasn't pretty, it was delicious. 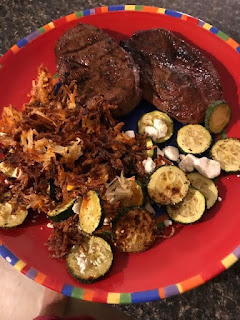 Ian and I are spoiled because we love steak and I've been getting them from Fresh Market. We are on a tight budget right now so I bought some cheap chuck steaks to try. We read instructions meticulously on the web to see how to keep them tender. It wasn't that difficult. Bring them to room temp and salt the crap out of them. We let them sit awhile and then patted them dry. We added marinade and threw them on the grill. They were delicious! Of course it wasn't the Fresh Market ribeye but at $7 for 4 steaks, I would say it was a win. I served mine with my frozen, shredded hash browns that are only 70 calories a cup and roasted zucchini with fat free feta. 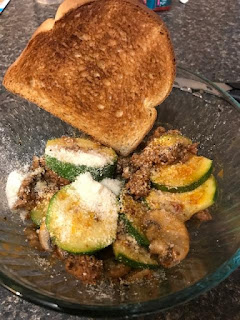 Because Ian and I are on different diet plans, it can sometimes be a challenge to meet in the middle with him. If I ate what he ate, I'd eat mostly Taco Bell and pizza. Having said that, we still cook a lot at home. We make a ton of meat on the grill. Well, he had the hankering for spaghetti. Because I'd already had my "rib sticking" meal earlier that day, I decided to skip the pasta. It stilled turned out yummy. I had a giant bowl of lean ground beef, one quarter cup spaghetti sauce, mushrooms, onions, zucchini and garlic. I added a few teaspoons of grated parmesan and ate a piece of low calorie toast. I feel lucky that I like vegetables so I take advantage of that. However, it is important to me that the vegetables have flavor. These are the kinds of meals I have throughout the week.

Weeknights have rarely been a problem for me. It's has been and always will be those pesky weekends.