Hey y'all! I hope the last week of July is going well for you and that you aren't melting in the heat. I walked my dogs for about ten minutes yesterday and I immediately started pouring sweat. It's so gross outside. I skipped my weigh in last week because I went to bed too late the night before and frankly, I wasn't too excited about getting on the scale. I will get on in a couple of days to see where I am. Right now, my motivation fluctuates by the minute. At the risk of being a broken record (I realize I've been one for years now), I'll just attempt to take it one day at a time. 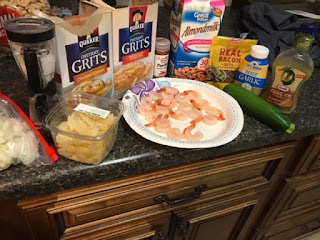 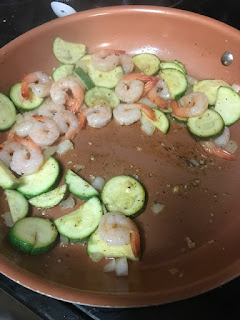 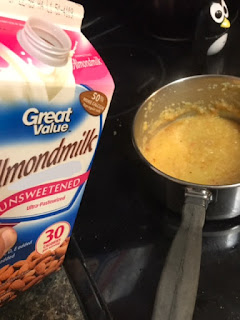 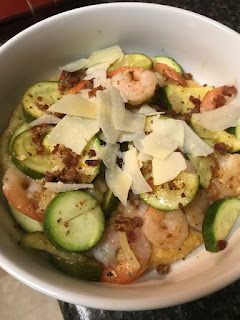 This week I wanted to share two recipes that I threw together with shrimp only using groceries I had on hand. I had an idea last week to make a quick shrimp and grits. This dish is typically a rich, luscious bowl of goodness loaded down with fat. I won't pretend mine lived up to a restaurant style shrimp and grits but it WAS delicious. I sautéed zucchini, onion and shrimp in a skillet using a couple tablespoons of an olive oil based dressing. That way, it already had built in oil and flavor so I didn't have to use butter or additional oil. While that was in the pan, I took two packets of instant grits (one ham flavor, one cheddar flavor) and cooked them in a sauce pan after boiling about half a cup of water. Once it was done cooking, I added a bit of unsweetened almond milk to make the grits a bit creamier (not to brag but this was a great idea on my part...it really worked!). When it came time to assemble, I put the grits in the bowl, added the zucchini, onion, shrimp mixture and then topped the dish with a few real bacon bits and some fresh, shaved parmesan. This was a ton of yummy food with lots of flavor (FYI, I also seasoned the shrimp with salt, pepper, garlic and smoked paprika) and VERY little fat. Not only that, it took me about ten minutes to make. I will most definitely be making this again. I forgot how convenient, filling and guilt free a packet of instant grits could be. 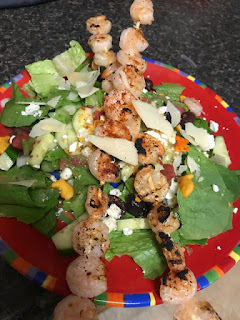 The next day, I used the remaining shrimp by slinging them on a couple kabobs and throwing them on the grill. I seasoned those with salt, pepper, garlic powder and smoked paprika and cooked them on the grill a couple minutes on each side. While they were grilling, I threw together a Greek-style salad with fat free feta, kalamata olives, the same olive-oil dressing, onions and cucumbers. I topped the salad with the shrimp, shaved parmesan and a few Goldfish crackers for croutons because I'm a giant 5 year old. It was big and bright and a perfect summer lunch. Shrimp is awesome because it takes almost no time to prepare and allows you to have a break from chicken and vegetables when you're trying to eat healthy.