Hey y'all! I hope you had an awesome holiday. If you had to work, God Bless You! I'm so sorry! I'll jump right in today. When I weighed on Saturday, I knew that I had rocked the prior week. I exercised like crazy and ate like a champion. When I stepped on the scale, it was just what I thought...I was down 3.4 pounds! That brought my total to over 5 since I started Weight Watchers again. In part, I worked extra hard the prior week because I knew that the several days after the weigh in were going to be challenging. What I didn't know is that I would turn into the Incredible Hulk and eat every carbohydrate and grilled meat in sight. I ate too much, I drank too much and I felt like such a sloth. Between 4th of July celebrations and my Dad's birthday, it wasn't pretty. I'm back on track today and I'm hoping to do some recovery before weighing again on Saturday. Despite the fact that I will most likely see a gain at my next weigh in, I'm still feeling strong and motivated. Sometimes, you just have to have a few days of indulgences. 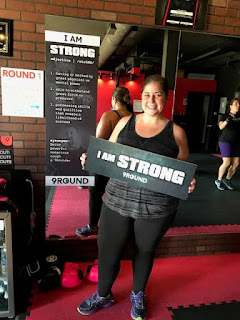 Speaking of being strong, one of the ways I've stepped up my game is at my gym. Mostly, I do it kicking and screaming, but the trainers at 9 Round Fitness (specifically one crazy guy named Terry) push me in the best way. I've officially taken the boxing Kool-aid. 9 Round is definitely an investment. It's more heavily priced than a gym that only charges $10 a month. What is does do is gets your heart rate up and allow you to get rid of any pent-up rage. I've done a lot of fitness plans at home but I never find the self-motivationto push myself. I've also been a member of many gyms and there's not another place that allows you to come whenever, stay as long as you want and include one-on-one training with an experienced personal trainer. If you have one in your town, I highly recommend giving it a shot. 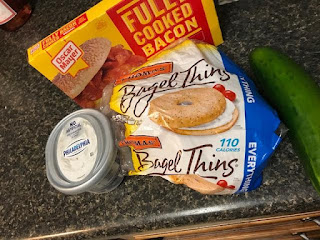 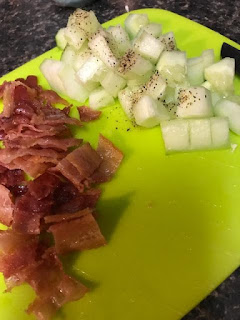 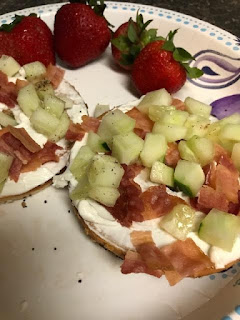 Now that I'm back on the wagon and trying to shake off those extra holiday pounds, I'm once again looking for ways to eat healthy foods and not be bored. I LOVE cucumbers. I've loved them since I was a kid. This is great because cucumbers are mostly water, low in calories and they are full of vitamins. I've had them many ways and the only ways I say NO to cucumbers is if they are hot (some people bake them into chips...gross) and if they are turned into pickles. Pickles are not cool. They are easy to incorporate into most fresh dishes. I like to have little cucumber cream cheese sandwiches. This morning, I took my Everything Bagel Thin, added light 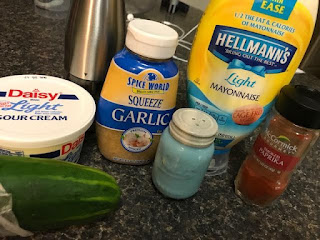 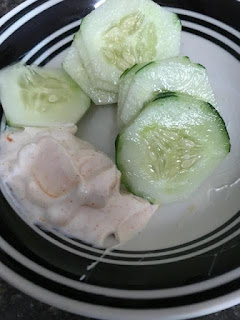 I believe that chips and dip should have their own food group on the pyramid. I love dipping anything into anything and when I'm dieting, I usually lean on cucumbers to get me through chip cravings. I don't really like carrots so cucumbers are lifesavers, though I'm not pretending they are as good as chips. I dip cucumbers in hummus and/or salsa all the time. One of my favorite dishes is cucumber salad. My mom makes this and it's a concoction with mayo, sour cream, garlic, onion, salt and pepper. Since the dish has full fat mayo and sour cream, and it's hard to tell exactly how much you're getting, it's not exactly healthy. I love the flavors so I made a little dip out of one tablespoon low fat mayo, two tablespoons light sour cream, a squeeze of minced garlic, salt, pepper and smoked paprika. It had a wonderful flavor and creamy texture. It was perfect for a snack!

If you don't like cucumbers, I get it, vegetables are the worst. If you do like them, think of the ways you can jazz them up and throw them into every meal and/or snack!

I hope you all have a fantastic week!