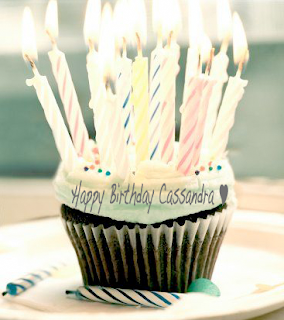 Hey y'all! I'd like to start the blog today by wishing my bestie/former common law wife Cassandra a VERY HAPPY BIRTHDAY! I know you're working right now but I still hope you have a great day! Things will be a little wonky in the next few days in terms of diet as I'll be traveling some and eating a couple rounds of Mexican food but I'll work to do as well as possible when possible and only indulge when it's really, really worth it. I've done well this week and when I weighed Saturday I was down almost half a pound. I'll take it! The Fall semester is looming, I have one more beach weekend at the end of August and then I'll have a rigorous teaching schedule that always helps keep me in line and less mopey about eating healthy. The students are baaaaackkkkk and I think I'm ready for them. 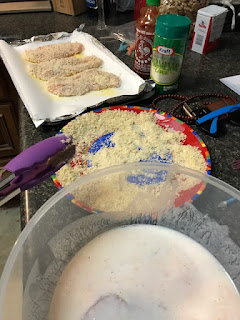 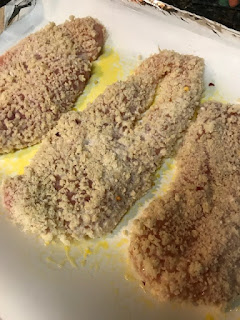 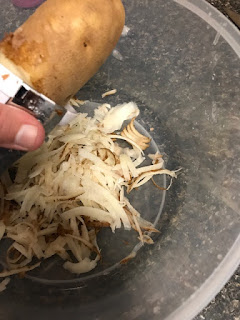 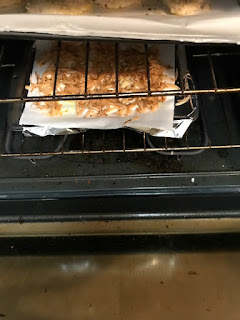 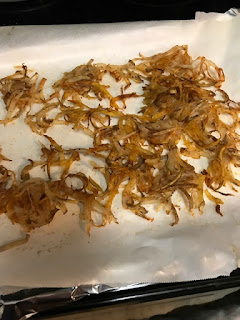 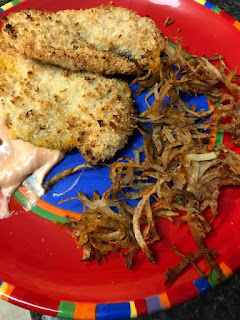 This week I wanted to show you a dinner that I made that substituted fried foods. Notice I didn't say they "replaced" fried foods...just a substitute. I made Trisha Yearwood's recipe for "Unfried Chicken" and a Pinterest find for curly fries with no oil. Both actually tasted great! I especially loved the chicken because even though it didn't taste better than fried, it was really crunchy so it had my approval. All you do is season chicken breasts, dip them in a mixture of non-fat buttermilk and sriracha sauce and then dredge them in a combination of Panko breadcrumbs, grated parmesan and whatever spices you want. I am always using salt, pepper, smoked paprika and garlic so that's what I added. Add the chicken breasts to a cookie sheet lined with aluminum foil, parchment paper and non-stick cooking spray and bake at 400 for about 30 minutes. I left it in a bit longer to get it crunchier and more golden brown. To go with it, I made curly fries with no oil. I took my zoodle maker and stuck a potato in it. Now, if you've got the Kitchen-Aid attachment for zucchini noodles, I feel like this would be super simple. It was a huge pain in the rear end with the cheap plastic thing I have. I feel like Zeus himself couldn't have gotten more curly fries than I could have out of that potato. Once I had enough for two servings, I gave up. Other than the annoyance of getting the curly fry shape, it was a cinch. You just toss the potatoes in a bowl with salt, pepper, garlic powder, smoked paprika...you get the idea. I stuck those in with the chicken at 400 and let them go just as long. I could have let them go a bit longer but even though they don't have oil, they actually do crisp up pretty well because they are so thin. I really enjoyed this meal. It had flavor and crunch and it was satisfying...plus there was almost no fat in the entire thing. That's all I have today! Until next week!
Posted by Heather Wyatt