Hey y'all! Today is the first day of school at the University of Alabama which means, I'm sweating, couldn't find a parking space and have 300 emails. Summer is officially over, so I'm going to make this quick. I didn't weigh last week because I haven't exactly been a picture of perfection on the weekends. I plan on weighing Friday before a quick trip to the beach with my family. Once that's over, I am hoping routine and general hectic-ness will keep me on a more healthy path. The good news is, I'm not beating myself up mentally. I feel fine. I have a lot going on and as Popeye says, I am who I am. Cheers to the new school year! 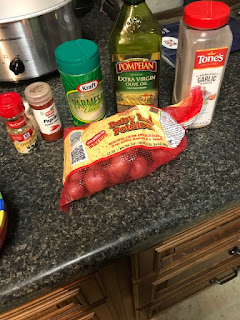 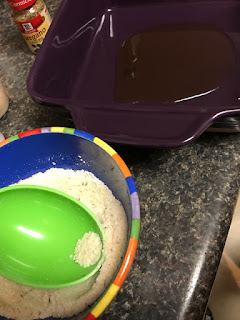 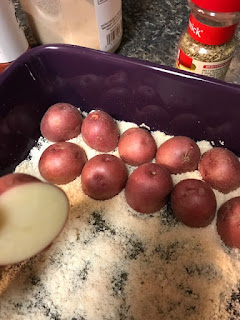 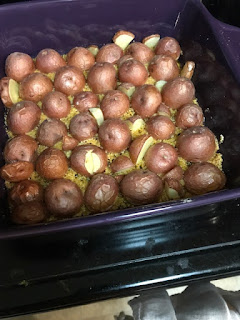 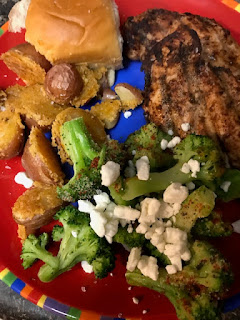 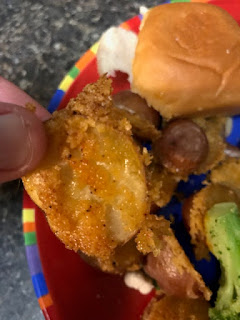 The first recipe today was snagged from Pinterest. They are called Parmesan Potatoes and they are tasty and easy to make. Pre-heat the oven to 400 degrees. Grab a bowl and combine grated parmesan (about half a cup), and roughly half a teaspoon of salt, pepper, smoked paprika and garlic powder. Take a baking dish and add around 2 tablespoons of olive oil, swirling it around until it coats the bottom. Then, sprinkle the cheese mixture evenly over the bottom of the pan. Line baby potatoes that you've cut in half to the bottom of the pan. This makes an awesome crust on the potato. The crust is most definitely the most exciting part so bake this dish around 40 minutes or until you can see the oil/cheese all bubbling and brown underneath the potatoes. I still added ketchup to these potatoes but they were a nice change up from the norm. I served them with grilled chicken and broccoli. 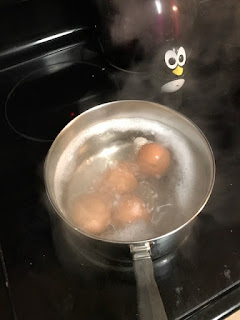 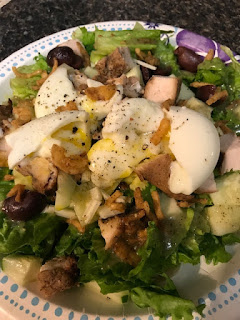 Since I'm a Food Network addict, I often see things I want to try when watching it. I was watching Guy's Grocery Games one day and one of the chefs said he was going to add a "5-Minute" egg to something. Essentially, it's a soft boiled egg. I'd never made one before so I decided to give it a shot and top a salad with it. The idea is to bring water to a boil, add your eggs, boil them for 5 minutes then remove them from the water and put them into a bowl of ice water. This KIND OF worked. The problem I had was removing the shell. Because the yolk was still runny, the egg kind of exploded on my hand when I tried to crack it. The result was still acceptable. I had most of my runny yolk left, added salt and pepper and it made a nice addition to my salad. I'll have to work on this one a little bit.