Howdy y'all! I'm typing this from a Nashville hotel room. I'll be leaving soon to head home but it's been an exhausting and fun couple of days. Ian and I drove from Tuscaloosa to Atlanta on Monday morning, helped load a moving truck for his mother and then drove to Nashville (where she will now be living) in one day. We got there right at dinner time on Monday, ate then slept and then moved her in to her new apartment yesterday. When we were done with all that, we got a chance to play in Nashville and had a blast. I am SO TIRED though. Yikes. I was worried about not getting enough exercise but the soreness in my butt, calves and arms tell me that I am going to be just fine on that front. We are stopping in North Alabama to see more of Ian's family on the way home and then I get to do nothing all night. I'm pretty excited about that. I have decided I probably won't weigh this week. Or, if I do, it will be with the full understanding that it's going to be...let's say...unfavorable. I managed to luck out and drop a couple pounds before this trip so nothing is too dire. I am going to the beach next weekend and then I am going to have an INSANELY busy semester with more students than I've ever had so I'm hoping the routine will be good for me. 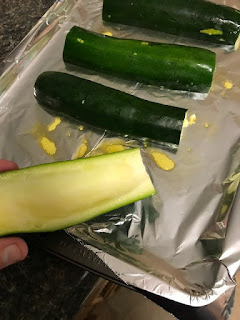 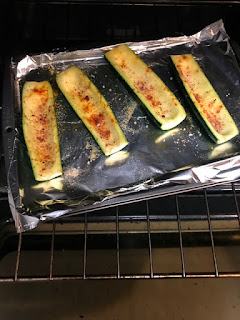 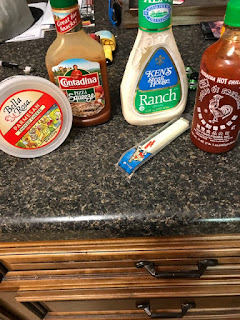 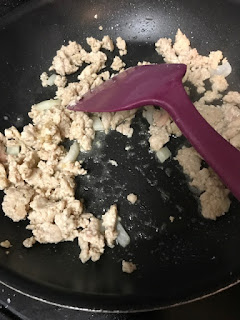 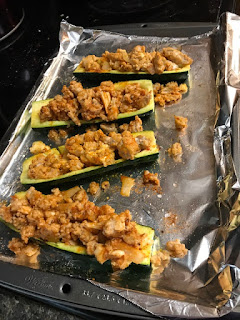 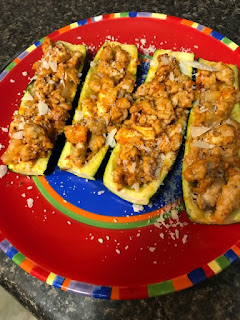 I feel lucky because I'm not someone that hates vegetables. But, to be honest, I find them pretty boring unless they have fat and carbs in or around them. Because of that, it makes it difficult for me to get excited about vegetables when I'm trying to eat healthy. I use them as something I put on the plate to take up space so I don't eat too much of something I'd rather be eating...if that makes sense. I eat a crap ton of broccoli and I'm SO OVER it. So, I thought I'd get a couple zucchinis and jazz them up a bit for a little excitement. The first recipe I made: Zucchini Boats. I've made something similar to this before. I don't like peppers but I like the idea of "stuffing" things so I enjoy stuffing both zucchinis and mushrooms. However, I don't love putting forth effort and because zucchini boats have more than two steps, I rarely make them. This day, I was feeling OK about having a lunch that took more than three minutes to make. I kicked on the oven to 350, cut the zucchinis in half, gutted them (to make a boat), seasoned them with salt, pepper, garlic powder and smoked paprika and threw them in the oven with some cooking spray so they could start softening. In a skillet, I browned some ground chicken and then added onion. I split the chicken into two bowls. In one, I mixed Sriracha, ranch (a TINY bit) and some string cheese for a "buffalo chicken" effect and in the other bowl, I combined pizza sauce, shaved parmesan and string cheese for a "pizza" effect. I stuffed the zucchini with those mixtures and put them back in the oven for about ten minutes. They came out perfectly. I really liked the spicy one. The Sriracha gave it a nice kick! These are awesome because they had almost zero fat and they were super filling. 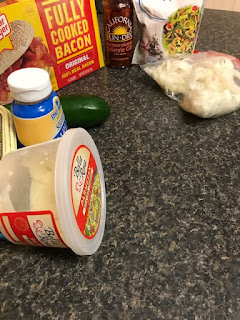 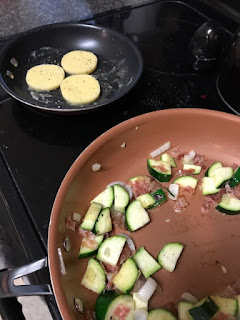 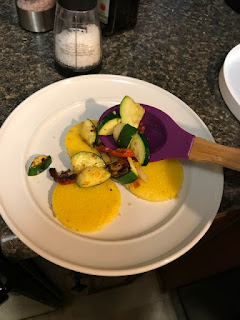 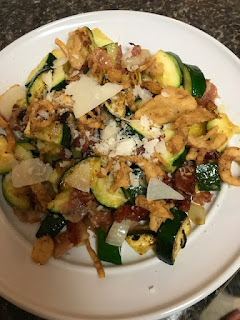 The other zucchini recipe I made was a combination of a recipe I saw on Pinterest and a couple ideas in my own head. I still had polenta left from another recipe so I heated it up in a skillet after I seasoned it with salt, pepper and garlic powder (which I do with everything including the ground chicken I mentioned above). In another skillet, I sautéed zucchini, onion, garlic, bacon (the pre-cooked kind that's 80 calories), and sun-dried tomatoes. Once everything was hot, softened and all brown, I placed the polenta on a plate and then added the zucchini mixture. To top it all off I added shaved parmesan and those little fake onion salad topper things you put on green bean casserole. I never think about getting those but I'm so glad I did. I've been putting them on everything for texture...including hot dogs (that idea came from the Kitchen). Anyway, the dish was so easy and DELICIOUS! I don't know why but there's something luxurious about a sun-dried tomato for me and I think they were my favorite part. Essentially, you can pile anything on polenta if you want. I recommend both of these dishes highly. If you don't like zucchini, you could choose pretty much any stuffable or sautée-able veggie.

That's all I have! Y'all have a good week!