Hello! How was everyone’s weekend? I hope it was nice. After my grand achievement of getting down 75 pounds on Wednesday, I went and mucked it up and ate like a champ over the weekend. I am back on track as of yesterday though. I didn’t weigh Saturday and won’t weigh until this Saturday to give my body a little recovery time. Hopefully there isn’t too much damage to recover from and if I’m lucky, maybe I will be right where I was Wednesday morning when I was celebrating the 75 pound mark...we’ll see...it may take a few extra days of work. In an effort to shake my memory of all of the bad food I ate, I will discuss recipe night... 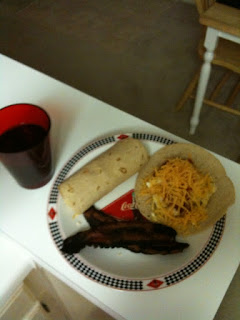 I made Tex-Mex Breakfast Burritos. I put one that was wrapped and the other open so you could see it in the picture. These were delicious! I love breakfast for dinner...always have...my mom and dad would make pancakes or omelets sometimes for dinner and I always loved that. It’s basically just eggs that have hot sauce mixed in and you put them on a wheat tortilla with salsa and cheese. I also made some turkey bacon to go with it (crisp like I like it). I would say that the best thing about this recipe was that it is by far the quickest one that I’ve ever made. I think it literally took me 15 minutes total from the time I started to the time I was sitting down to eat it. It was definitely one of those I could pull out any night for a quick dinner.

I want to give a quick shout out to my Oma...

In the picture, you will see the purple keyboard wrist rest and the mouse pad that has a memory foam wrist rest. She knew I was having issues with Carpel Tunnel and that I needed a more ergonomic workstation so she hooked me up with this awesome stuff! Thanks Oma! They are working like a charm...very comfortable AND extremely helpful!

So, this weekend was the Alabama-Penn State Game...it was the game that ESPN did for Gameday so there was all kinds of ESPN stuff around. I took a few pics of the game and campus... 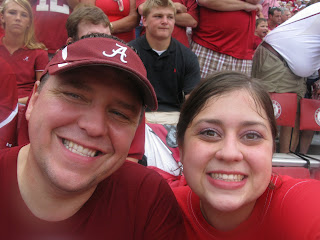 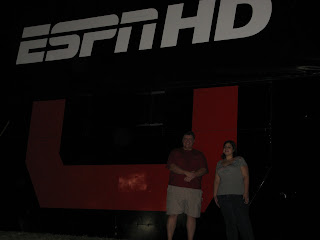 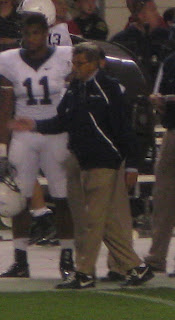 Alabama totally dominated the game so it was a fun experience...plus...we got to see Joe Paterno and that was pretty cool. As you may be able to tell by the picture of me and my dad...it was SOOOOOOOOOOOOOOOOOO HOT outside. It was humid as all get out and the few minutes of rain only added a sticky element to the already miserable heat. I was sweating so bad that my dad could see the makeup just running down my face. It was awful. I think it was my fault though because last week I was saying how the first game wasn’t that hot and since the Penn State game was at night I thought it wouldn’t be that bad...I thought we might not have any miserably hot games but I was VERY wrong...yuck. It was still a really fun game to go to though!

As far as Sunday goes, there isn’t much to report. I started working on my Halloween costume that I am making for work which is sort of top secret so I’m not tellin’...I also watched the season finales of True Blood and Entourage which were both kind of a letdown. I am going to really miss True Blood though...it’s good that all the fall shows are about to start coming on again.

I think that’s it. Like I said, I was really good yesterday and I have no plans of being really bad again until I go to Savannah the weekend after next. I will have to work really hard so the impact won’t be that bad.

Yeah I´m a white liar
The truth comes out a little at a time
and it spreads just like a fire
slips off of my tongue like turpentine
and I don´t know why
White Liar.” White Liar-Miranda Lambert
Posted by Heather Wyatt