Happy Weekend Everyone! I hope your week has gone swimmingly. I’ve had a pretty good one...it’s been busy but there isn’t anything too major to report since Tuesday. Alabama is playing Duke this weekend in North Carolina and I’m not going. It’s going to be nice to have a weekend with an away game to get a break from the crazy heat that is still hovering over Alabama. I plan on watching the game at my parents and Sunday, I am going to drive up to Chattanooga to have lunch at my Grandmother’s house and maybe do a little shopping. I am going to make sure to arrive back in time to have my mom’s lasagna though...she’s making it to celebrate my Oma’s birthday and I’m glad because it’s DELICIOUS.

So, have y’all heard of or tried Zumba (I think it's Latin dancing)? 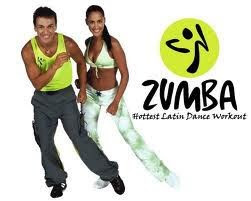 I heard someone at work talking about it and then I heard somewhere else that it was lots of fun. I am not sure about buying videos anymore. I bought the pole/chair dancing videos and they were awful. Those types of things usually cost a lot of money. I think they may offer classes on it somewhere in town because I think I saw it on Facebook or something but I’m not sure where they would be. Anyone tried it and like it?

In college, we had access to a state of the art rec center and my roommate Cassandra and I used to go all the time. I miss all the classes they used to offer. There were some that were really hard...I remember not being able to move for a week after an ab class that only lasted 15 minutes. I also tried the Spin Class at the rec and honestly, that was the worst pain I’ve been in after a workout class...ever. It wasn’t just the endurance of the class that had an effect. I don’t know how people ride bikes. Let’s just say I walked like I had been riding a horse for five days. It was awful. We also took a kickboxing class that was WAY too intense. Right in the middle of a vigorous workout, the instructor yelled at us to run around the entire gym. Not only was it embarrassing, it was impossible for me to run after having basically boot camp for 30 minutes. Apparently a couple people had taken the class before and knew she was going to do that and snuck into the bathroom while we all ran. I make the classes sound bad but I really kind of miss the good ones. Cassandra and I loved the club/hip hop dance classes. We were awful at it but we stayed at the back and laughed at ourselves the whole time. They would make up a whole routine so they went over it dozens of times. When we would get home we would be so excited to show everyone but it never failed that after the first 8 count, both of us had forgotten the steps. It was still fun though and we were exercising. The rec is way too expensive if you aren’t a student there...I might need to look into PARA or something to see if they offer dance classes...might be something fun to do as an alternative to walking and the elliptical.

Anyway-it’s been a long day. I think I will probably go to bed early all weekend because I have to get up early Saturday and CRAZY early Sunday to get to Chattanooga in time for lunch. I don’t really have much else. I hope everyone has a great weekend and roll tide!