Georgia On My Mind...

Hello! It feels like it has been a year since I blogged but it was only Friday. I guess that means time is creeping by...it probably is going slow because I’m excited...I get a long weekend in Savannah! It should be fun...Jordan and I are leaving Thursday afternoon!

When I weighed on Saturday, I was only up .8 which was pretty good considering I had a couple of rough days. I will wait to weigh until October 2nd to weigh again because I know that I will be bad in Savannah and that will give me 5 days to try and get down a little so maybe the damage won’t be that bad.

I had a nice weekend. I didn’t do too much on Saturday, just sort of relaxed and watched football (Bama destroyed Duke). Sunday, David, Jordan and I drove up to Chattanooga to visit with my family. My Grandma made lunch as she always does on Sundays and it was yummy! I also got to see my family and hang out with the newest addition, my cousin Mark’s baby Drew. He is SO cute and you can tell it’s been awhile since a baby was in the family because everyone gives him all kinds of attention. After we ate, we went to Kohl’s. Tuscaloosa doesn’t have a Kohl’s and I am starting to have less and less clothes that I can wear so I was able to get a couple pairs of pants. Thanks for a great afternoon Grandma, David and Jordan! It was fun. As soon as I got home, it was time for a lasagna dinner so I felt ridiculously full/sick after eating all of that food. It has actually felt good to be back to a normal eating pace the past couple of days.

So-here is the most recent recipe... 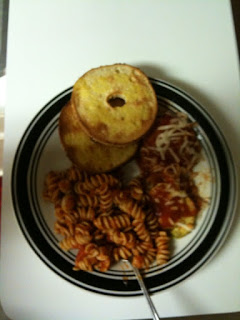 This was Eggplant Parmesan. It was actually delicious! I have gotten Eggplant Parmesan out before but I had never tried to make it myself. It was really easy to work with. With the Weight Watchers version, you just slice the eggplant, dredge it in egg whites and breadcrumbs (and some spices) and you bake the eggplant first and then you put it all together. I also made some pasta and garlic bread to go with it. Anytime you can get a filling and tasty pasta dish on a diet...it’s a good day. I would most definitely make this again.

I don’t have too much else to report. It has been an extremely busy week so far and I have a lot to do before I leave on my mini-cation on Thursday. I am pretty pumped about all the TV premiering this week but it always kind of stresses me out because I watch WAY too much and sometimes it’s hard to keep up...but you know what...if not having the time to watch all my shows is one of my biggest problems in life...I think that means I’m doing pretty good. I will probably blog on Thursday to talk more about Savannah and Football! Have a good night! Bye!

“This is going to be a total cluster cuss for everybody.” Mr. Fox from the Fantastic Mr. Fox
Posted by Heather Wyatt