Greetings & salutations y’all! I trust that each and every one of you had a wonderful holiday break and that you were able to spend time with your family and enjoy it. I had a wonderful Christmas. I received a ton of gifts…I’m pretty much a spoiled brat. I got all of the practical things I asked for (work out pants, pans, food scale and gift cards) and then I also got a Blu-Ray player which was totally unexpected. I am not the greatest at keeping up with technology. Someone usually has to get me a gift to persuade me to use a new gadget or I will wait for a couple years before I ever even acknowledge new things (it took a LONG time for me to get an iPhone). So, I was excited about the Blu-Ray player but I didn’t know that much about it. Now that I’ve set it up and I can get Netflix and Pandora on my TV…I’m totally geeking out over it! It’s going to be SO awesome to play things instantly and listen to Pandora! I didn’t take too many pictures but I posted 3 below. One is of Dixie in her Christmas bandana…she wasn’t thrilled about it but I thought it was cute. One is of the milk and cookies that I left out for Santa and then the last one is of me & Jordan after we exchanged gifts. I was excited because I gave both him and my parents a scrapbook for Christmas. The one I made for Jordan had lots of pictures of us at different places and on different holidays and then the one I gave my parents was all about our Europe trip. They turned out really cute!!! 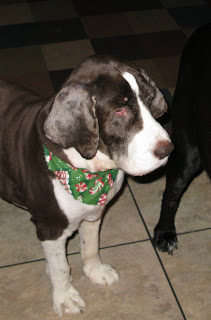 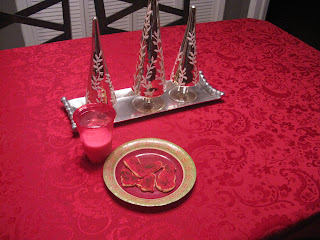 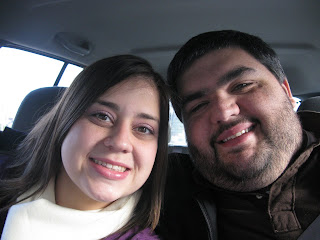 It was a nice Christmas. On top of all the gift giving and receiving and family time and resting, there was also a LOT of eating. Oh my goodness…I made the mistake of weighing on Friday morning. Even though I had been good all week to try and make up for the Christmas parties, I was still up 3 pounds…and then I ate all day Friday and Saturday so I know it’s not good. I will have to work REALLY hard next month but I have to say, it’s been totally worth it. I had an awesome breakfast Friday morning that my Aunt Kris made and then my Grandma and Aunt Brenda put out a huge spread of food for dinner. Then the next day, my mom made a ridiculously good breakfast with sausage balls, bacon, eggs, hash brown casserole and HOMEMADE cinnamon rolls (I probably ate 5 of them over the course of the day). We sort of snacked here and there all day and then as always, we have Chicken Elizabeth (it’s a stuffed chicken dish with ham, cheese, onions and mushrooms in the middle), broccoli cheese casserole, baked potatoes and then cherry delight for dessert. I was so full Christmas night I thought I was going to be sick. I got right back on the bandwagon Sunday and I’ve been doing well ever since. I will probably weigh Friday morning before the New Year’s weekend begins just to view the damage and see how much weight I’m going to have to lose in January to get back to where I was…I’ll let you know. Even if I weigh Friday, I will probably gain a couple more pounds over the weekend and then that’s IT! I have to put my fat foot down and get back to business…also…you will be happy because after the new year begins you won’t have to hear me complain about gaining weight and feeling bad for eating good food for awhile.

Despite all the food I ate this weekend, I was right back on last night and I made my recipe…

These were Buffalo Chicken Pizzas. It literally took me like 10 minutes to make/bake these. I bought a little mini square loaf of bread at the grocery store that was whole wheat (you can use a Kaiser roll and cut it in half but the store didn’t have Kaiser rolls and I didn’t want to buy a whole 8 pack of them) and I cut it in half and dug out a little of the bread inside to cut some of the calories. I put the two halves face up on a cookie sheet. I took 4 oz of the fajita chicken strips I love so much and cut them into bite size pieces and tossed them with some Dijon mustard, hot pepper sauce, and some store bought honey barbecue sauce I had (the recipe called for honey but I didn’t want to buy a whole bottle of honey for one tablespoon). After you mix all of that together, you spread the chicken on the bread and then sprinkle some low fat mozzarella cheese over the top and bake until the cheese is melted. So it was super simple and REALLY tasty…it also filled me up. One serving is only one pizza but I had the points so I had both and that kept me full the whole night. Until I come up with a more clever scale, I give the Buffalo Chicken Pizzas 4-1/2 stars out of 5. I will be blogging again on Thursday to wish you all a happy new year. Have a good week! Bye!

“What if I stumble, what if I fall?
What if I lose my step and I make fools of us all?” What If I Stumble-DC Talk
Posted by Heather Wyatt