Greetings Y’all. I hope your Tuesday (otherwise known as Monday’s obnoxious twin) is treating you well. Boy did I take advantage of the words “cheat meal,” this weekend. I went over to a friend’s house who had made buffalo chicken dip with Fritos and pizza. If I have access to an unlimited amount of pizza and/or Fritos (two huge weaknesses for me), it always gets ugly. Saturday night was living proof to anyone who ever tells me to just have a bite of something, that I simply can’t do that. Technically, I did nothing wrong because that was my cheat meal but because of my gluttony I felt mental and physical anguish for the 24 following hours after the incident. Hopefully, it will not cause any lasting damage…I will be lucky to get rid of that pesky .8 pounds that I need for the 85 I’ve been working so hard for but that’s what I get though. Oh well, the food I ate this weekend was worth it because I had fun with family and friends. I would talk about the super bowl if I cared anything about it but I really don’t, I saw all the commercials and some were good, I thought every musical performance had some serious issues technically and I enjoyed the tailgate themed meal my mom prepared…that’s pretty much the only thoughts I have about it. The only thing it does for me is signify that football season is officially over and I don’t get to see college ball for a long time…which is devastating.

I made a recipe last night that was so good, it was worthy of TWO pictures. 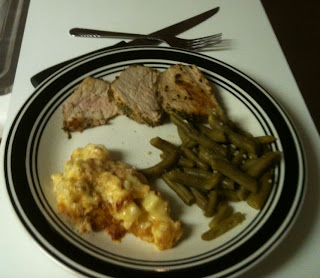 I made a pork roast last night and for some reason, making something like a roast made me feel really grown up. I get really intimidated by 3 things in cooking. The first is making anything that requires soft or hard peaks. I had a bad experience with a soft peak one time when making an angel food cake for my Dad…these terms freak me out and I think it will be awhile before I try again. The second is cooking rice. I have NEVER, and I repeat NEVER made a pot of rice that didn’t make me pull out the jaws of life to clean the pan because the rice has nestled deep into the fibers of the pan, never to come off again. I don’t know why, but I have a total complex and I cannot cook rice without ruining it. I need to invest in a rice cooker but I fear I would mess that up too. The third fear is making dry meat. My mother has a wonderful ability to always serve moist chicken, steak, pork, anything and sometimes, when I make things…they turn out dry. It is for this reason that I have stayed away from things like roasts and chicken breasts because I am scared I will dry them out but last night, I put myself out there, got a Weight Watchers recipe and attacked a pork roast head on.

It’s pretty simple, you preheat the oven to 400, take an extra lean pork roast, rub it in 2 tablespoons of olive oil, then rub a combination of garlic powder, onion powder, oregano, thyme and really whatever herbs you like (I didn’t have thyme but used Parsley and a tad of chili powder to give it some kick) all over it and pop it in a spray coated roasting pan and put it in the oven for 30 minutes. It came out perfect! It was juicy and DELICIOUS. I served it with green beans and a potato side dish from Stauffer’s. I will warn you about the Stauffer’s dish. You may already know this but I was dumb and didn’t. I was looking in the frozen isle and noticed the Stauffer’s cheddar potato bacon bake thing and even though those things are extremely high in fat, I took a glance at it because I thought it may go well with my roast and not be that bad. The package is LITERALLY no bigger than the tiniest lean cuisine so I assumed it was one serving. There was approximately 270 calories and 14 grams of fat for a total of 6 points. That wasn’t terrible so I decided to have it with the roast last night. Thank goodness I looked at the nutrition facts again because it turns out, it was 2 servings. That is ridiculous…it’s less than I’d say half a cup per serving…if you eat the whole thing it was about 540 calories and over 30 grams of fat. I don’t understand why companies do this, why they package something that clearly looks like a single serving but it has more than one. Anyway, I was able to eat the whole thing because the pork was so lean and the green beans aren’t bad but I couldn’t do my normal snack and dessert. I didn’t let it deter me from feeling all adult-sophisticated-like because I had successfully made a roast…something I could serve to a kid…if there were one around…my mom will be proud! Maybe I can make it for them one time. 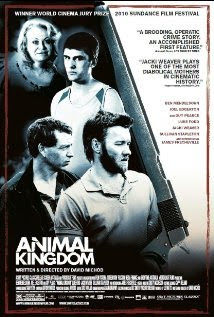 Before I go, I wanted to briefly discuss the movie Animal Kingdom (pictured above). This isn’t a best picture nominee but Jacki Weaver is a nominee for Best Supporting Actress. This is an Australian movie (which is code for, I didn’t understand a dang word they said) about a boy who has to go live with his grandmother and four bank-robbing uncles because his mother dies and they get him roped into all kinds of trouble turning him kind of crazy in the end. The movie was…weird. It was violent and in my opinion, it wasn’t good enough to justify the violence. What I mean is, if I have to see folks getting shot, I’d like the movie to be awesome (The Departed, Pulp Fiction, Goodfellas etc)…I’m kind of over watching movies (which are so realistic now) where people get shot in the face. I can see why Jacki Weaver is nominated though…she did a great job playing a creepy grandmother, obsessed (in a gross way at times) with her children.

Only two more movies left to see…Jordan and I are having a hard time finding them but we are bound and determined to see them by the end of this weekend.

I am sort of geeking out about making lists and predictions for the Oscars…sad I know.

Oh well, have a nice week!