It feels like SPRING IN ALABAMA! Look, I held off as long as could complaining about the cold because I personally loathe the sweltering summers in Alabama but I was getting fed up with the frigid temperatures. Well, the weather seems to be warming up a bit but not too warm…basically it’s perfect. Jordan and I traveled to Atlanta on Saturday (after we stopped at Cheesecake Factory for a cheat lunch that I won’t describe in detail because I’m already hungry and it’s too explicit for a diet blog) to finish our Oscar quest which I will discuss more later. So, on Sunday, when I drove back from Jordan’s in Birmingham, I took FULL advantage of the amazing weather. I sat on my patio and finished a book and then I went to my parents and I was having my dad and brother help me with my golf swing. Aside from mini-golf, I’ve never played golf and in my quest to try new forms of exercise, I’ve been wanting to learn golf. I wasn’t too bad and I could tell it really works out your hips and stomach…something I desperately need. We are going to go to the driving range this Sunday…who knows? Maybe I will like it and get decent enough to even play a round of golf…I’m going to take baby steps though. I’ll have to let you know how the driving range goes. After that, my brother wanted to throw the football and so we did that for awhile and then he goes, “let me throw it to you this time and you run, and I’ll tackle you.” I said, “um, no.” He said, “I promise I won’t lower my shoulder, it won’t hurt.” I hesitated but I went ahead and IT WAS SO FUN. It didn’t hurt, I basically just flew through the air and landed on the grass…it was GREAT exercise…I never could tackle him…he just stood there. Anyway, after about the tenth time I started to feel…broken. I told him I needed to go in. First of all, I’m allergic to grass so I was breaking out in a rash and then as the night progressed, my hip started to feel like someone took an ax to it and my back didn’t feel great either. I still haven’t fully recovered…not my brightest moment…fun though. The other parts of the weekend involved rest and TV watching. I still haven’t seen ALL of the Grammy’s but I saw enough to be SUPER excited for the success of Lady Antebellum! Love them. 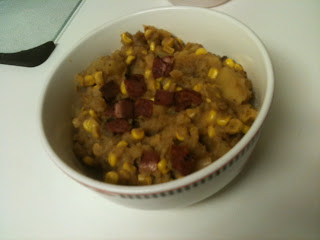 I made a Corn and Bacon Chowder. I’m not gonna lie…this may be gross…but to me this looks like regurgitated prison food but it definitely didn’t taste that way. It was another simple dish…you cut up some turkey bacon and crisp it in a skillet, remove the bacon, sauté onions (and bell peppers if you are into that), add potatoes and chicken stock, bring it to a boil until the potatoes are soft (not until you’ve cooked every ounce of water out of it like I did), add in some corn and let it cook a little more. Then you take about half of the soup out of the pan and puree or blend it and add it back in with a little bit of light cream…cook some more and there you go. You put it all in a bowl and top with your bacon pieces. It had great flavor with the onions and bacon and the potatoes made it a filling dish.

I also learned a handy tip. A lot of times when I cook, I will need like 1 tablespoon of some random ingredient that I don’t normally use. A lot of times, these ingredients go to waste even though I try really hard to find uses for them. I needed 1/8th of a cup of light cream for the chowder…but in my cookbook it gave me a tip. You put the remaining cream in an ice cube tray, freeze it and then put them in a baggie or container and you have little 1 to 2 tablespoon cubes of cream in case you need it for soup or something in the future. I thought it was a cool suggestion…so I did it…I HATE wasting food.

Now, to the subject of movies… 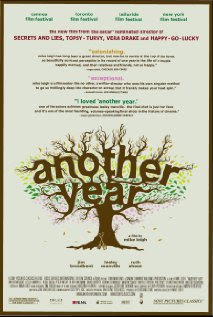 The first movie we saw was Another Year. This movie is nominated for screenplay and that’s it I think. It’s a British film about a happy couple who has a 30 year old unmarried son and some very unhealthy (mentally and physically) friends…there was one in particular that the movie sort of centered around. The movie is divided into seasons, so there are four long scenes for each season. The movie has a couple of pleasant memories but overall, I thought it was long, boring, and pointless. There were a ton of characters in this movie that were NEVER developed. There was no conclusion that eases the mind of the viewer which I might be OK with if there had been a plot. If you are going to leave questions, that’s fine but if there are GAPING holes in the storyline and a movie doesn’t have the centuries old basic plot scheme, it can turn into a disaster. I just don’t understand…maybe it was above my head but overall, I didn’t enjoy it. 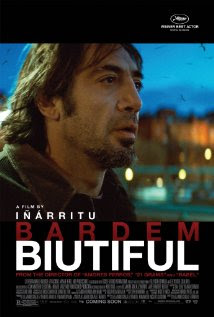 Biutiful was a COMPLETELY different cinematic experience. This is another movie that I thought was great but I probably won’t watch it again. Javier Bardem gave an amazing performance. I don’t think it’s possible to give a brief synopsis of this movie so I won’t try. This movie was EXTREMELY complex. The movie made me feel physically ill several times. Javier Bardem’s character is very sick and he and his children are also poor so there are a lot of gross scenes involving those aspects. His jobs in the movie and the parenting skills of his wife are also highly disturbing. Like I said, there is layer upon layer in this movie and it’s highly thought provoking and sad. I will warn you that there are subtitles in the film though. I am not a huge fan of reading subtitles because I get easily distracted but the movie was so good that I was able to get lost in it and reading the words didn’t bother me. I would definitely recommend watching it at least once.

We are all done with the major categories and we still have almost two weeks before the Oscars come on so that’s REALLY ahead of the game. There are some minor movies that I may watch leisurely on Netflix but we got to all the major ones! I will make sure to share my predictions closer to the show.

I can’t wait for the Oscars now! It takes a lot of money and energy to watch all of them but it really is worth it in the end…it makes the show MUCH more enjoyable when you’ve seen the movies and pick favorites. This is the third year we’ve done it and each year there has been amazing movies…I think my favorite year was 2009 because EVERY movie we saw was great. The past two years were awesome but there were at least one or two in some categories that were undeserving (in my opinion) and that just wasn’t the case in 2009 (“The Curious Case of Benjamin Button,” “Milk,” “The Reader,” “Slumdog Millionaire,” I could go on). Anyway, I have a feeling you will all be glad when the Oscars are over.

I posted two more pictures below…the first is the picture Jordan and I took after our triumphant Oscar finish. The second is a picture I took of the adorable Valentine’s Day napkins my mom had at her house. I cropped my face out of it…lol…the lighting and long weekend were not kind to my face in that picture. 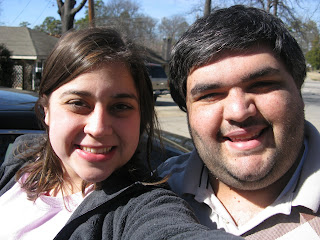 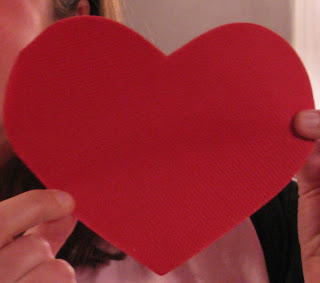 Enjoy the weather if it’s great where you are!

“Today is where your book begins,
The rest is still unwritten.” Unwritten-Natasha Bedingfield (I’ve probably used this song before but I don’t care.)
Posted by Heather Wyatt