Hi Y’all- I can’t believe I’m saying this but welcome to the last blog until October.  This year has flown by.  The good news about October is that it means Halloween is just around the corner.  I don’t know if y’all know this or not but Halloween is my FAVORITE holiday of the year.  It looks I have the potential to dress up at least 2, maybe 3 times this year so I’m so excited and the wheels are turning fast for ideas.  I was moderately behaved this weekend but I have been better.  When I weighed on Saturday, I was down a couple from the prior week so at least I’m headed in the right direction.  It’s a nasty battle I’m in because I’m hovering between 6-8 pounds ABOVE my lowest weight.   If I could get rid of those ugly extras, I’d feel better about my little plateau.  It’s not easy with football season and the holidays coming up but I’m pressing onward quite fiercely with exercise and I’m still at 75-80% on my dieting habits.  I’m working hard. 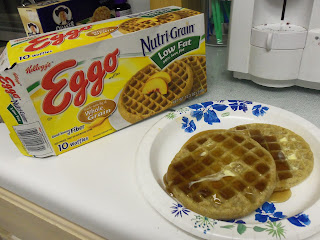 This week is apparently waffle week and I have a myriad of waffle inspired food that you can make.  The first is your standard waffles with syrup.  I know that I’m not exactly reinventing the wheel here or anything but if you like waffles and have a hankering, the Nutri-Grain, Low Fat waffles from Eggo are delicious, especially topped with butter spray and light syrup.  I’m an advocate of breakfast for dinner.  I have it two or three nights a week since I don’t get breakfast for breakfast very often and these waffles are low in fat and calories and pretty filling, too. 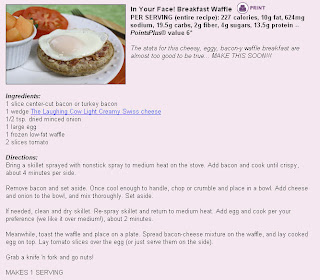 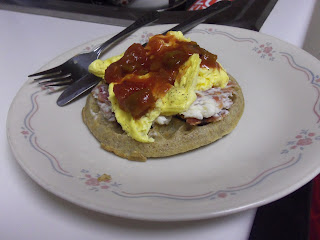 This recipe came from The Hungry Girl and I love it. It's called an In Your Face Breakfast Waffle. If the text is a little small, I think you can click on the image to enlarge or Google the title of the recipe.  I used the pre-cooked bacon that you can microwave in 20 seconds and is only 70 calories for 2 slices.  I also opted for egg substitute rather than cooking a whole egg (this dropped the calorie/fat count) and I also used a bit of fresh salsa rather than the sliced tomato.  This recipe had great flavor, whole grain and good protein.  I would definitely make it again.  It was also especially easy because I took the shortcuts with the eggs and bacon. 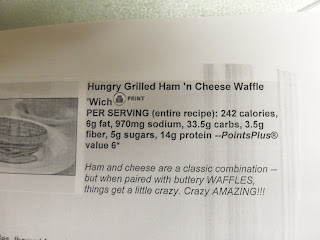 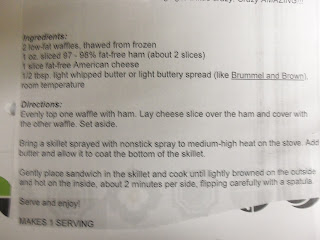 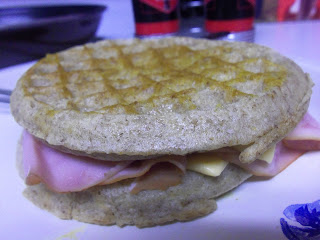 The Hungry Girl is representing again with this recipe.  It is essentially a grilled ham and cheese sandwich that uses the frozen waffles as the bread.  I used butter spray on  both sides after I toasted them and then added the ham and cheese.  If you wanted, you could even add a bit of light or fat free syrup on the inside to give it the  feel of the McGriddle from McDonald’s (which is AWFUL for you by the way).  It is yet again something simple and low in points that I can just whip together and enjoy on a weeknight. 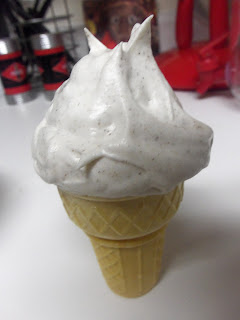 Last up on the waffle train is actually not a waffle…as you can see…but a waffle cone.  See what I did there?  I bought waffle cones awhile back for a recipe and a ton of them came in a box.  The kind I got are great because they are only about 15 calories a piece so I’ve been trying to come up with different ways to use them.  In this picture, I had mixed together Cool Whip Free with cinnamon and placed it in the cone like it was ice cream. It was quite good.  As a tip, putting cool whip in the freezer makes it smooth like ice cream.  If you do that, you can mix it with cinnamon, fruit, maybe a few chocolate chips or anything and eat it from a bowl or cone to trick your  brain into thinking you are having ice cream.  Sometimes, I eat it right out of the container like I used to do with Ben & Jerry’s pints.

I have another busy week ahead but if I play my cards right, I may get a Sunday of mostly rest which is something I haven’t had in quite some time.

I want to give a shout out to my Oma who had a birthday last week.  We celebrated last night.  Happy Birthday, Oma!

Also, Roll Tide y’all! Alabama is 4-0 after their win against Florida Atlantic on Saturday.  They play Ole Miss this Saturday and hopefully that will kick off some more interesting games.  Not to complain but Alabama hasn’t really had much of a challenge yet this season.  I certainly don’t want really close scary games or losses but jeez, let’s amp it up a bit.