Salutations, y’all.  It’s Monday again.  I am torn between constantly wishing for the weekend and then wanting time to slow down.  I’m going to be 29 years old in less than a month and while I am not too off target from where I thought I would be, it’s crazy to think that in a little over a year, I’ll be 30.  I felt an actual sting typing that last sentence.  I never thought I would really care about age and maybe after the slow-moving torture of approaching 30 is over, I’ll feel totally normal, but until then, it seems like an impending doom.  I suddenly feel in a hurry to accomplish major goals.  I weighed the same again this weekend and while I’m proud of maintaining, I want to do more than that.  I think the need to re-amp and get things finished doesn’t just apply to my weight.  It’s spilling over into the career areas of my life.  I am stuck in a place where I don’t take care of myself like I should, I don’t write as much as I can, I don’t care about things like I could.  I don’t remember the exact moment that I decided to take charge of my life a few years ago when I was so determined to lose weight but I wish I did so I could somehow recreate that moment and begin again.  I need to clear my head and really search for that spark so I can ignite it again and start kicking major butt. 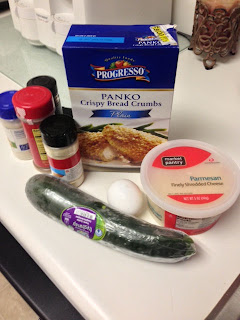 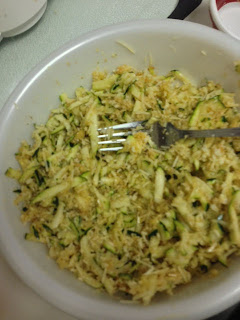 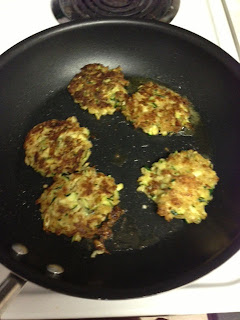 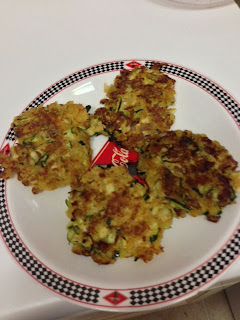 My recipe this week can be called “Zucchini Fritters” I guess.  It was a Pinterest inspired recipe.  Basically, you grate a zucchini then mix it with egg, bread crumbs, parmesan cheese and spices.  You make the mixture into little patties and then pan fry them in a bit of olive oil.  As long as you don’t overdo the olive oil, the recipe is healthy.  You could lighten it up even further if you wanted by using egg substitute rather than egg as the binder and cut the olive oil completely and just use non-stick spray.  It was the weekend though so I was indulging a bit with the oil.  These were quite tasty but I will say the thinner and crispier they are, the better they taste so keep that in mind when making the patties.  They are pretty simple too so I’d recommend them.

I have been told I’m mean, grouchy, and grumpy in multiple variations many times over the past several weeks.  Let’s be honest, people have been using adjectives like this to describe me for years.  I am honest, yes, and I suppose I can be brash but I do really enjoy it when the people around me are happy so when I hear terms like this, it upsets me.  Most of the time I joke about it but I genuinely don’t like that people think I’m mean.  The people that know me best know that I’m not a hateful person but I don’t want to give the impression that I’m not nice in general.  I honestly don’t know how to change it because I can’t identify it.  I know I get in bad moods so I can certainly work on trying to be more pleasant during those times but I tend to display my emotions in my facial expressions.  I’ve been doing this my whole life so it’s tough to make changes on habits that I’ve spent almost three decades developing.  The truth is, sometimes I’m not happy.  Over the past several months, I’ve let the happiness of others dictate my mood.  I think that this has something to do with the plateau in my weight loss.  In that area, I know I need to be more selfish.  Happiness comes from within and not from any one person in particular.  This is something I know to be a fact but living my life like that is a little easier said than done.  I want to work on shutting out the negativity that surrounds everyone’s daily life and focus on what is good in my life…which happens to be a lot.  Also, I don’t want to be fake but there is something to be said for ignoring the urge to punch someone in the face and sucking it up.  Granted, I don’t run around hitting people but I know for a fact I look like I want to punch people sometimes.  I realize this does me no good so why not just smile and move on?  I think I’ll make that my mid-year resolution.  I am rambling now so I’ll quit.  I am not perfect…not about weight loss…not about anything.  It’s important to me that people know that.  I know it’s not inspiring but the battle lasts forever.

A-Day is this weekend.  It’s Alabama’s spring scrimmage and it’s fun because it puts just a taste of football season in the air.

Please keep the runners of the Boston Marathon in your thoughts and prayers.  We all have violent tendencies that we tuck away but acting on violence and hurting innocent people is something I don’t think I’ll ever understand.

Please have a safe and wonderful week! Bye!

“I bet this time of night you’re still up.
I bet you’re tired from a long hard week.
I bet you’re sitting in your chair by the window looking out at the city.
And I bet sometimes you wonder about me.

And I just wanna tell you
It takes everything in me not to call you.
And I wish I could run to you.
And I hope you know that every time I don’t
I almost do,
I almost do.

I bet you think I either moved on or hate you
‘Cause each time you reach out there’s no reply.
I bet it never occurred to you that I can’t say “Hello” to you
And risk another goodbye.

And I just wanna tell you
It takes everything in me not to call you.
And I wish I could run to you.
And I hope you know that every time I don’t
I almost do,
I almost do.” I Almost Do-Taylor Swift