Well we are officially into spring which means I have a layer of pollen on my car and apparently on my eyeballs because my eyes have been itching and watering all day.  I hate to complain because I am so sick of cold weather but my allergies have been taking a pretty hard hit so far this spring.  I know I am not the only one experiencing these symptoms so I’ll stop now.  I am staying pretty static on my weight right now so there isn’t much to report.  I need to change something up and get more serious because this plateau is annoying me.  Part of it is me and my inability to say no to a cocktail or Japanese food (thanks Cassandra) but part of it is just my metabolism needing a jump start.  I am running a 5K on April 27th so I jogged yesterday in preparation but I think I need even more change ups.  As always, I’ll keep you updated. 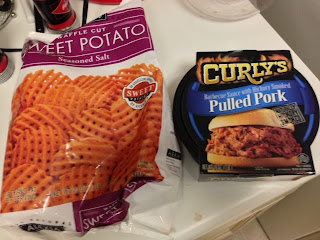 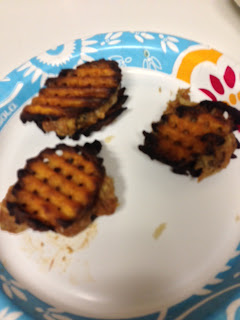 This week’s recipe has two ingredients and was inspired once again by Pinterest.  All you do is take frozen sweet potato waffle fries and your favorite pre-made BBQ.  I guess you could make your own BBQ but that would defeat the purpose of it being a simple recipe.  All you do is bake the sweet potato fries according to the instructions on the package (I tried to the biggest ones), heat up the pork and then use the fries to make mini-BBQ sandwiches.  They are cute little sliders.  The combination of the crispy fries and the BBQ was great.  I would say it’s one my favorite recipes I’ve ever made just because it was so easy and tasted delicious. 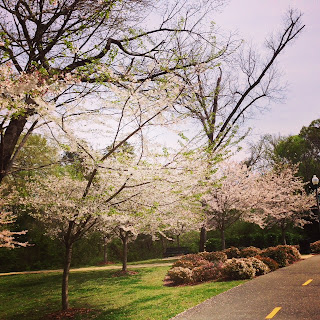 Like I mentioned earlier, it’s spring which means for a brief time, it’s not cold and rainy in Alabama and it’s not blistering hot.  There are two short periods in the Spring and Fall in Alabama when it’s acceptable to be outside and we are in the middle of one of those times now.  It’s almost worth the rolling pollen sweeping over everything.  I was outside a lot this weekend and was happy the whole time.  The above is a picture from the Riverwalk with my mom on Saturday.  Now would be a good time to start that exercising regimen you’ve been planning on beginning since the New Year if you haven’t already.  I hate to be the bearer of bad news but I hate exercising.  I thought when I first started almost 4 years ago that I would eventually enjoy running or working out but I want to be clear, I hate it…and I think I always will.  Now, there are certain forms of activity that I hate less than others like playing with my parent’s puppy outside or a dance class.  At this point in my life, I need a bit more in terms of exercise.  If you are inactive though, you can certainly start small.  The point is that you may not like to work out, play, exercise or move in general but you should be doing something.  I am not always perfect so I am not judging but I know how hard it is to make yourself exercise but I do it.  If you go out and have too much fun on a Saturday night, a hangover is not a good enough excuse to lay in bed all day.  I know this to be a fact.  I am the master of workouts full of reflux and fatigue but I figure I made the choice to do the things I do and my body shouldn’t be further punished by not giving my body a cleansing workout.  I hear people say all the time that they don’t have the time to exercise.  I don’t have kids so I know that puts me in a category of “you don’t understand” to a lot of people but I am of the opinion that kids or not, you owe it to yourself to keep your body healthy.  You aren’t doing your children or family any good by not taking care of yourself.  Take 45 minutes to an hour of your day 5 or 6 days a week and do something to burn calories and keep your heart healthy.  This isn’t a lecture.  I have plenty of vices but being lazy physically isn’t one of them.  Even though I despise exercise, there is no doubt in my mind that I am obsessive compulsive about it.  C’mon, you can do it.  Start slow and never stop!

That’s all I have today.  Have a good week.