About 5 years ago, I went to the doctor.  I have an inactive thyroid so I was at the doctor to get my regular check-up.  I refused to weigh when the nurse brought me back to the room.  I hadn’t weighed in months, possibly a year or two.  I knew the situation wasn’t great and I didn’t want to face reality.  I was 24 years old.  My doctor looked at my chart and with a gentle but honest tone told me that if I didn’t make changes immediately, I would be a diabetic before I was 25.  He also listed a multitude of other problems that were on my radar.

I left the doctor in a state of numbness.  I was fat.  I knew this.  I had good friends and a supportive family but I knew I wasn’t happy.  I also didn’t feel well.  I was exhausted all the time.  I had acid reflux constantly to the point where I would regurgitate some of  nearly everything I ate.  I felt pressure on my chest when I tried to sleep.  I couldn’t breathe well and had trouble when I laid down for bed.  I was also disgusted by the way I looked.  Mostly I felt invisible and had become stagnant in everything I did.  I was depressed.

When I first started considering making the changes the doctor suggested, I started slow.  I had tried to lose weight quickly many times and always gained the weight back.  While I was trying to decide what method I would use, I started waking up early  two or three times a week and walking 5-10 minutes around my neighborhood.  I will jog 13.1 miles straight on March the 8th and I’m telling you that I walked 5-10 minutes a couple times a week to start out with.

I was still finding myself eating too much so on May 30th, 2009, I walked into a Weight Watchers meeting.  I had no idea how much I weighed but put a number in my mind that I considered outlandish so I wouldn’t be too shocked.  When I glanced around the room, I sized everyone up.  It wasn’t out of meanness but I wanted to see if there was someone that I could see that looked like a success story.  I walked up to the counter and after joining, I was asked to step on a scale.  She discreetly wrote the number down on my book and told me the meeting would start in a few minutes.

I walked in, sat down and opened my book to the number that was on the scale.  The number I saw took my breath away.  It was less than 3 pounds away from the crazy high number I had decided I couldn’t be close to.  I had no idea it had gotten that bad.  I wanted to run out of the meeting.  I sat there, though, listening.  As soon as I got to my car, I burst into tears.  I had a major mountain to climb and I had failed every time before then.

The weight came off fast at first.  I lost 50 pounds in about 7 months.  I was motivated and I didn’t feel deprived most of the time.  It took me almost 2 years to make it to the 100 pound mark.  I know that may seem like a long time to people but I was able to have some fun in there.  I have mastered the ability to get immediately back on the wagon after a bad weekend.  I decided I’d rather it take a long time to lose the weight and learn how to live my life than lose it in 6 months and be stuck with a lifestyle I can’t maintain.

I have some major changes that I still haven’t made.  I’ve got habits that I can’t seem to break.  So, the work isn’t done and truthfully, it never will be.  I know that seems scary but it’s a good thing.  I don’t think complacency is something we should strive for.  Your health matters.  There is too much that needs to be experienced in life to give up.  So, happy five year anniversary to me.  I made a decision and though I haven’t been perfect, I’ve stuck with it.  I challenge you to do the same.

The lowest point I ever reached had me down 115 pounds.  Five years later, I fluctuate but I have never gained more than 15 pounds back.  When I weighed last week, I was down a couple but I ate like crap all weekend.  I have never reached my goal but I’ve also never given up.  I would never tell someone that what they are doing is wrong but when people ask my opinion or suggest a diet that requires starvation or cabbage soup or a juice cleanse, I politely tell them that it’s not for me.

When you decide to lose weight, especially if you need to lose a lot, there is no quick fix.  THERE. IS. NO. QUICK. FIX.  You have GOT to change your lifestyle.  You have got to stop beating yourself up if you mess up.  You have got to never give up.  I haven’t been able to get rid of the control that food has over me and there’s a chance I never will but I can never stop hoping.  My ultimate fear in life is gaining my weight back.  It’s a crippling fear that keeps me motivated.  It’s not just about the weight.  Since I’ve been obsessed with my health/body, the dedication I have spills over to every other part of my life.

I am reminiscing today because for one, I’m almost 30 and I seem to be taking a lot of time thinking about where I’m at in different areas of my life, second, I don’t have a recipe for you and I’m essentially a bad blogger, and finally, I noticed today that it has been a five year journey.  It’s been exhausting at times with some major highs and lows but I would never take it back for anything.  Every time I buy a dress from Belk Jr, I give a little smile.  Every time some stupid goober hits on me in a bar I think about the time when someone once told me I was “huge” when I was at a club.  Every time I go to bed at night and I can sleep on my side without my entire body going numb and without me losing my breath, I know I made the right decision.

I apologize if this was cheesy or redundant but I was inspired by a cabbage soup diet someone at work was on.  Everybody’s solution is different so come up with your own.  Just stick with it.

I had an amazing Valentine’s day weekend with friends and family with goodies and bad food galore.  I hope you all had a nice one too.  I am hoping to bring a recipe to you next week but if for some reason I don’t, I will spare you another long story.  I will actually dedicate most of next week’s blog to the Oscars.  Jordan and I are on our journey to watch all of the movies nominated in major categories again.  I have several left to watch still before the big show but I’m hoping to get them done  by the end of the weekend so I can give some thoughts on them on Monday.

My goal is to follow my diet perfectly until the day before the half marathon.  I want to get a few pounds off to lighten my run a bit.  This way, I’ll feel like I actually deserve the enormous burger I plan on eating afterword.

My friends and I have something called a Glow Run on Saturday.  It’s a night time 5K and it should be fun and more practice for the big run in March. 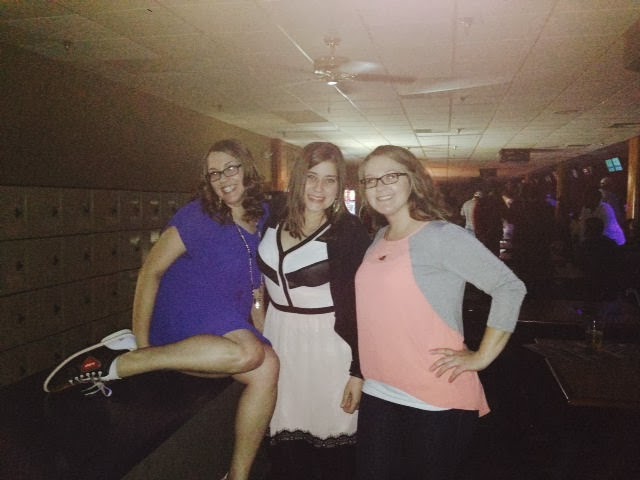 I wanted to give a shout out to my friend Heather.  Her birthday is today! So glad I got to celebrate with her this weekend!

Hope y’all have a great week and I can’t wait to share Oscar insight and more health related talk that’s on the lighter side! Bye!