Hey y'all.  Well, the results came are in from the scale and I wasn't happy.  I worked my butt off all month and I was up two ounces.  I know that isn't much of a gain but I was hoping for at least a 3 or 4 pound loss.  I didn't take this well.  I actually cried a little.  I have been working hard for several years.  I know that I'm not always perfect but to say it's discouraging when you are almost too sore to walk from working out so hard and when you feel like you're starving most of the time, is a pretty big understatement.  I ran about 5 miles after I weighed to prove to myself that I wasn't going to give up. I'm no hero though because I let the discouragement get to me and ate way too much on Sunday.  I don't know if I'll ever reach my goal and I'm pretty tired, honestly.  My body reacts poorly to anything less than perfection and am not sure I have it in me to be perfect anymore.  I will do my best.  Halloween is this weekend so I am giving myself a little wiggle room since it's my favorite holiday but I am coming up with an action plan to not over indulge too much.  Other than this weekend though, I'm going to do everything I can to be good and then I'll weigh again Thanksgiving morning. 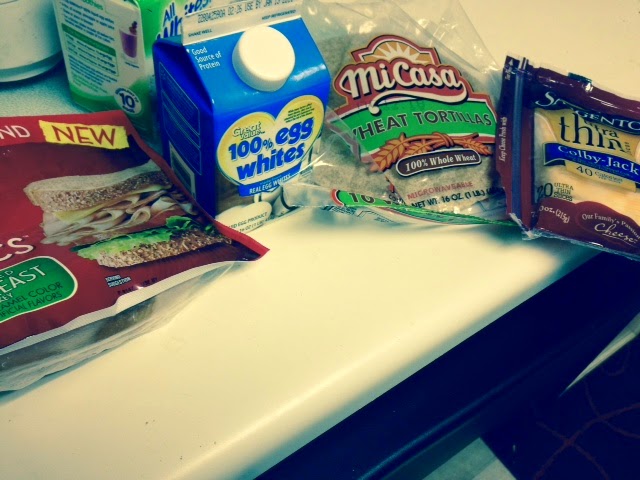 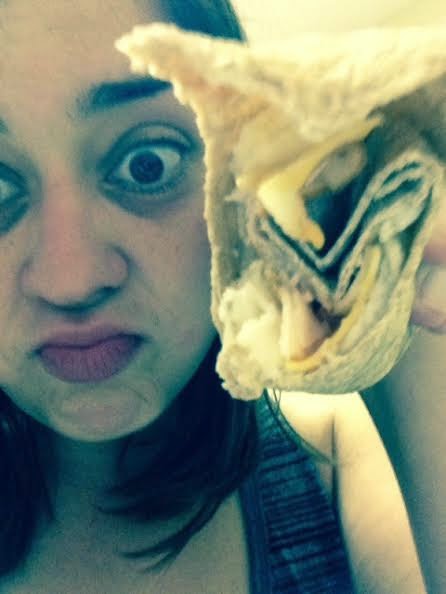 My roommate has been using wheat wraps for years for quesadillas and chicken wraps and I bought some after I was inspired by some Pinterest ideas and I've tried all kinds of things with them.  I haven't come up with anything revolutionary or anything but I will say, there are few limitations to the amount of things you can do with a wrap.  In addition to plain old ham and cheese wraps, I also started the week off with a breakfast burrito.  All I did was heat up some egg whites and add ham, cheese, hot sauce, salt and pepper and had a nice, filling breakfast.  It's different than the typical frozen sandwich I eat and it takes almost no time to make it.  It was good before my run because it had carbs and protein. 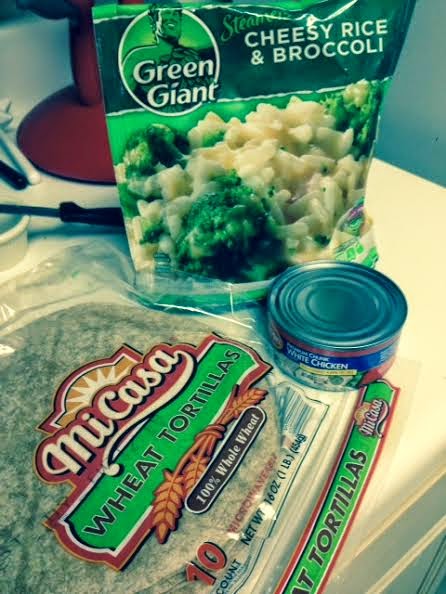 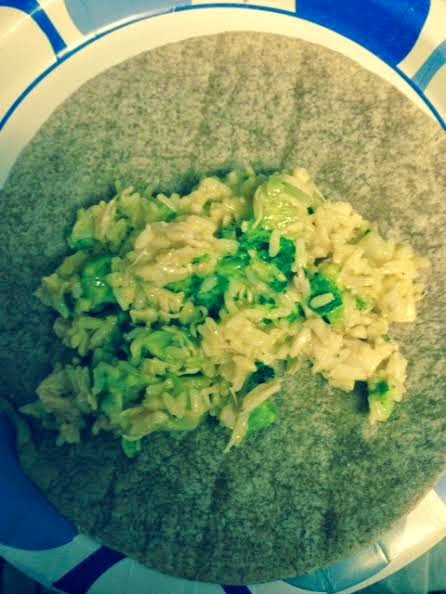 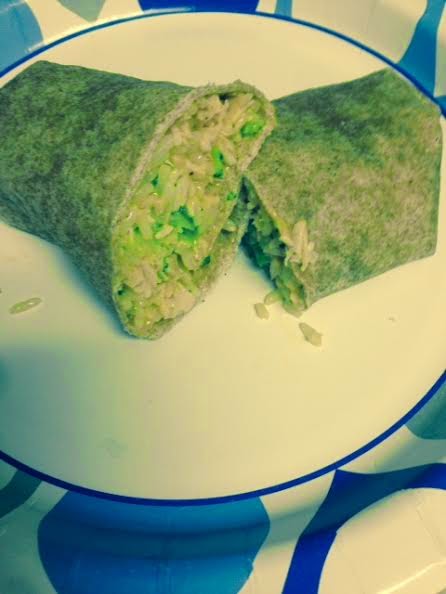 This is the one I saw on Pinterest that sent me into a wrap spiral all week.  You can buy a cheese, rice and broccoli mix in the freezer section.  Steam the ingredients in the bag in the microwave and then put half in a tupperware for later and use the other half on your wrap.  I added some chicken.  So, this is my cheesy, chicken, broccoli wrap.  I loved that I could divide the bag into two parts and make two wraps.  It was filling and tasty and stupid easy. 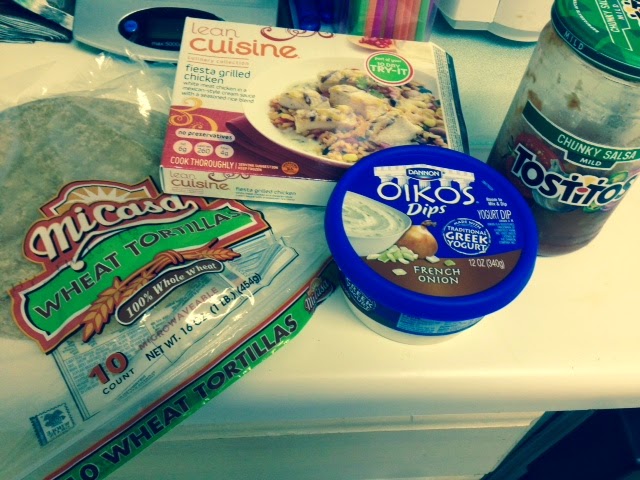 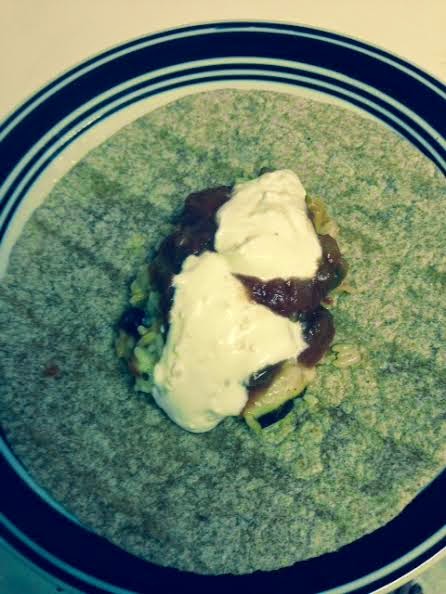 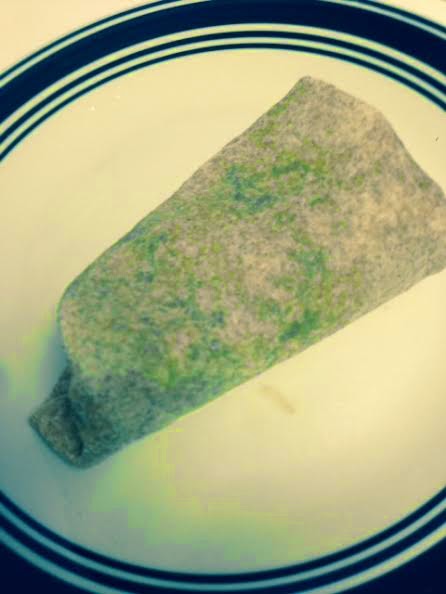 I am a fan of Moe's and I still eat there from time to time but I don't go often because what I really want isn't diet friendly.  Not only do places like Moe's and Chipotle over serve you, it's hard to say no to sour cream, cheese and guacamole.  So, I bought a fiesta inspired Lean Cuisine, heated it up, split it in two (saved the rest for another wrap later), added French Onion Dip made from Greek Yogurt to replace the sour cream, low fat cheese and salsa.  I will admit it's not as good as Moe's but I loved it! I know that Lean Cuisine's aren't the favorite of people who encourage you not to eat processed food but I also know people need to eat in a hurry and this meal already had chicken, rice, black beans and peppers so you didn't have to do anything else.  You could certainly leave out the cheese or add guacamole to make it yours.  Just remember to keep track of what you're adding and subtracting in terms of calories. 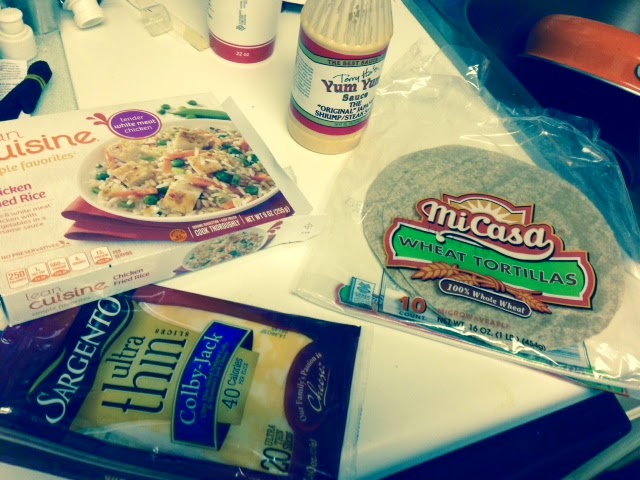 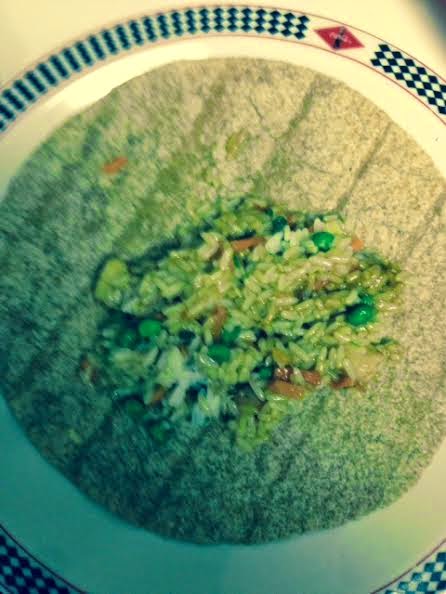 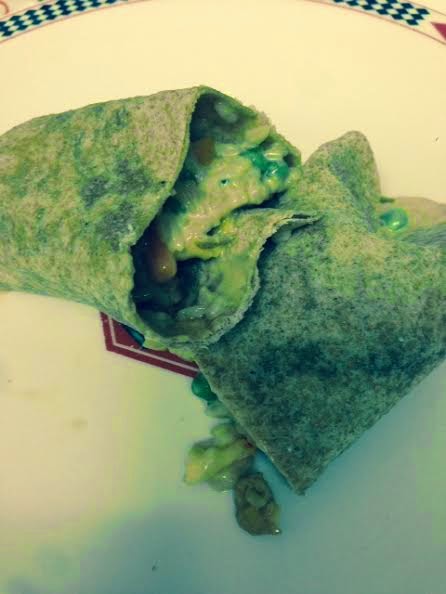 The last one is my absolute favorite.  We have a place in town called Tacogi.  It's a fusion place that essentially takes everything you love about a Japanese stir fry and stuffs it into a burrito.  This place is a guilty pleasure of mine and when I'm being bad, it's always on the list of potential cheat meals.  I bought a stir-fry Lean Cuisine (by the way, you can use whatever brands you like, I just chose the meals with the least calories), add low fat cheese, a little soy sauce and a serving of store bought shrimp sauce (make sure you're careful and measure the shrimp sauce.  I love the stuff but it's terrible for you.).  Y'all, this is delicious.  It's half the size of the giant burrito you're served at Tacogi but it's packed with the same flavors and you save a ton in calories and in price.  I will most definitely be making this again.  Also, I split this Lean Cuisine in two parts as well to make two burritos.  Half meal per burrito is plenty when you have the other ingredients and the wrap.  Yum, I want one of those again, right now. 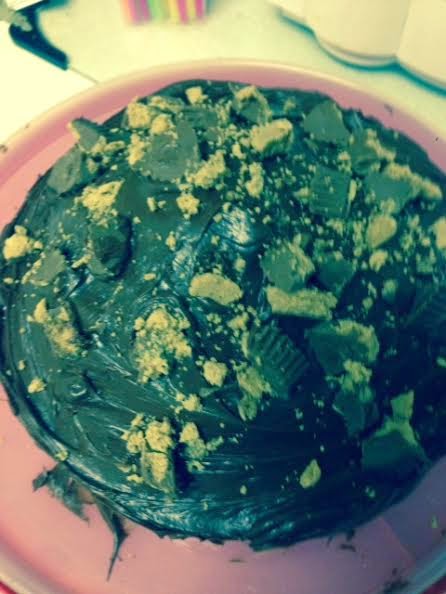 I made a cake from scratch this week for my cheat dessert (to clarify, I only had one piece).  It was a peanut butter cake with chocolate frosting that I spiked with crumbled peanut butter cups.  It tasted delicious but the cake was a little on the dry side.  Is there a secret to moist cakes that you make from scratch because box cakes are so moist, it's almost not worth the effort. 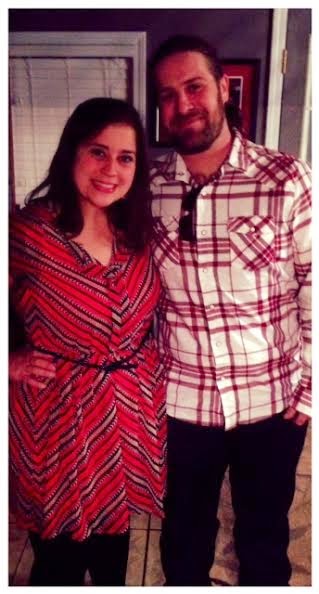 Ian and I watched the first half of the Tennessee game at my parent's house this Saturday and we were both dressed up so I made my mom take pictures.  I thought this was a cute one.

Alabama is off Saturday.  Halloween is this Friday and it is by far my most favorite time of the year.

I'm also going to a Bacon and Beer Festival on Saturday.  I know I won't be doing myself any diet favors this weekend but sometimes you got to let loose.  I'll just try not to be crazy.

Have a safe and fun Halloween!