Everything but the kitchen sink...

Hey y’all! I hope your Monday is alright. I had the worst time getting out of bed this morning.  I haven’t been good at functioning well all day.  I’m going at full speed now though so I hope the rest of the evening runs smoothly.  I am happy to report that I lost 5.4 pounds last week! I am hoping that, even though I am devastated I have to do it, calorie counting is the trick.  I noticed that counting calories limited my wine, almond and peanut butter intake quite a bit so as always, it’s about moderation.  I’m hoping that I keep going down because I’ve been very back and forth with the diet so far.  Despite the wishy-washyness of the results on the scale, I’ve lost a total of 13.6 pounds since I started the diet on January 5th so that isn’t too bad.  I’ve also lost 9.8” but I’m never sure if I’m doing that right or not.  I have about 4 more pounds to lose before the holiday weight is completely gone and about 24 more pounds to lose by my birthday in May in order to be under my lowest weight.  I am working super hard on my diet and at the gym and I was happy it paid off this week.  I wanted to give a shout out to my friend Liz who has been super encouraging about my blog! I just sort of write the truth which is that living a healthy lifestyle is hard and it makes me happy that it resonates with a few people! 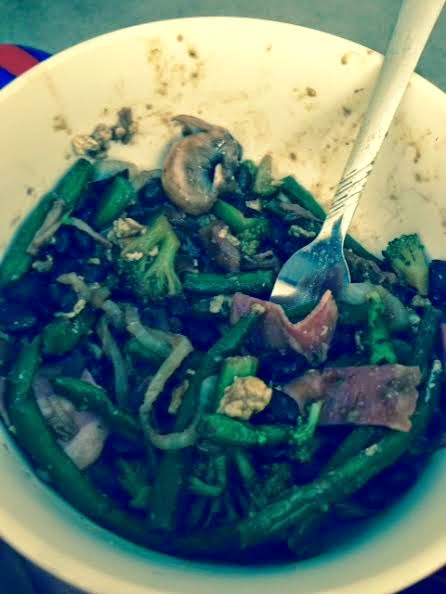 Over the past few years, I’ve developed a hatred for wasting food.  When I buy produce or products that can go bad, I try to do everything in my power to use them before I have to throw them away.  So, I spend a great deal of time throwing random things together.  It saves on money because I find a meal to prepare even though I’m low on groceries and it’s far less wasteful.  I firmly believe in taking a skillet and just throwing stuff in it.  I did it just the other week when I tossed in mushrooms, broccoli, green beans, onions, black beans, turkey bacon and a frozen Atkins meal that had beef and broccoli in it.  It had been in my freezer forever and I’ve had enough frozen meals in my lifetime to never want one again so I figured this would help jazz it up.  I added some soy sauce to give it even more of an Asian stir fry feel.  It was filling and delicious.  This is something I do pretty regularly.  My mom is the best at throwing together meals and casseroles with what she has in her pantry. 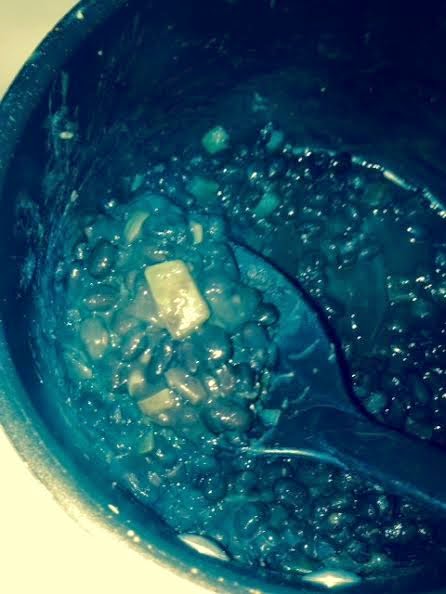 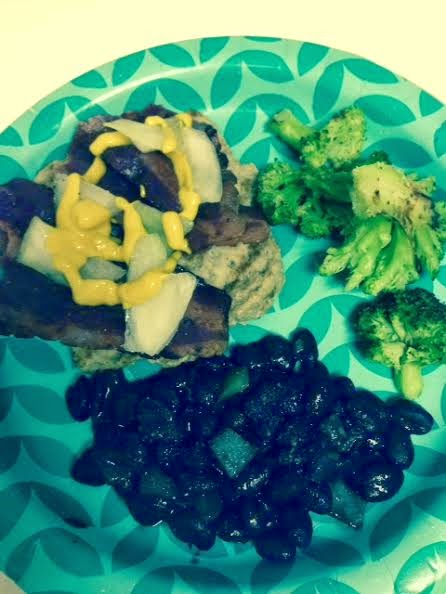 Another thing I’ve been into lately are the frozen Ballpark turkey burgers.  Turkey burgers have a tendency to dry out but you pop these puppies in the microwave for one minute, take it out and turn it over and then heat it up for another minute, they are perfect and juicy and make for a very quick and easy protein that you can add things to.  I’ve been eating a lot of black beans and they are also super to make so one of my favorite meals right now is a bun free turkey burger with bacon and mustard with black beans on the side that I’ve jazzed up with onions and spices.  The black beans are filling and though I miss bread all the time, the bacon, mustard and onion add a nice “real burger” feel. FYI-I have discovered that I find black beans totally gross if I don't drain all the black gunk off of them before cooking.  I discovered this after that picture was taken.  I know my food isn't always pretty but I'll let more capable chefs make attractive food. 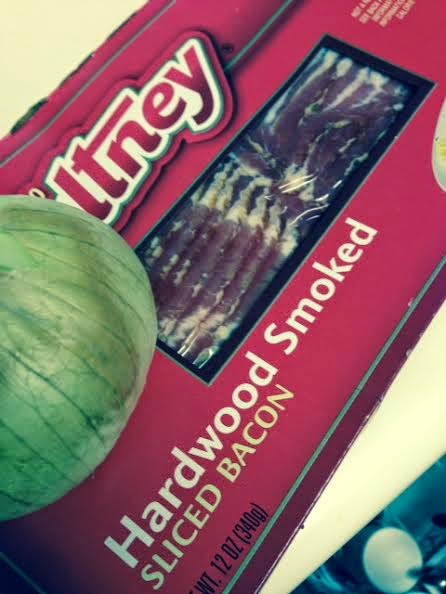 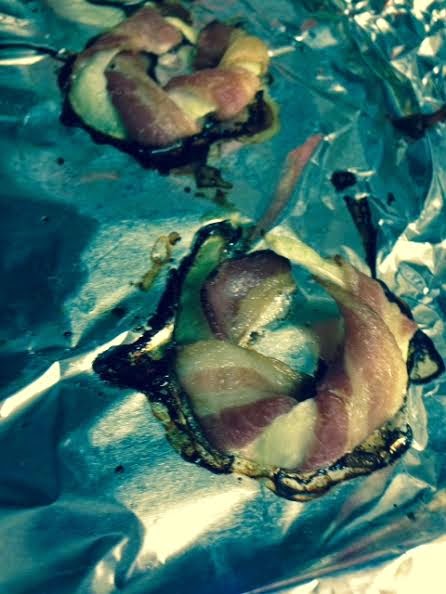 Finally, I added the most simple snack that also happens to be heavenly.  Bacon onion rings are Pinterest inspired and not something you want to over consumer.  All you do is wrap an onion ring in bacon and bake it until it looks like your favorite kind of bacon.  I like my bacon crispy so I will bake it longer next time.  I will also try to get a larger onion if I make them again.  I only used half a piece of bacon on each one.  It was yummy and a lot of folks have bacon and onion already so you can whip these up pretty much any time. 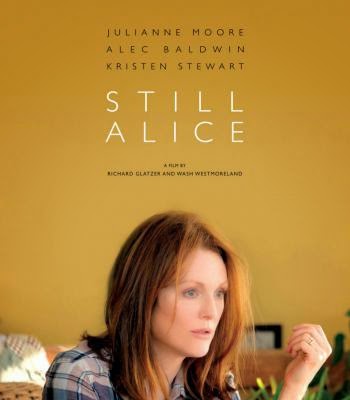 I have watched all but one Oscar movie now so I will watch it at some point in the next day or two and then do an extra Oscar post on Thursday telling you my favorites.  I know you can’t wait for that report.  The first one I saw last week was Still Alice.  So, my great aunt Allie suffered from Alzheimer’s and it was a terrible thing to watch.  Any topics relating to that disease make me super sad.  This movie is all about a character who discovers that she has the disease fairly early in her life and as a viewer we are forced to watch the horrific progression.  Julianne Moore is fantastic in the movie but I will more than likely never watch it again.  It was completely heart wrenching.  I sobbed during the movie and then well after it was over.  If I’m rating the movie on quality alone, I give it an A-.  The minus is because I pretty much think Kristen Stewart is terrible.  If I rate it based on how I felt after, I give it an F. 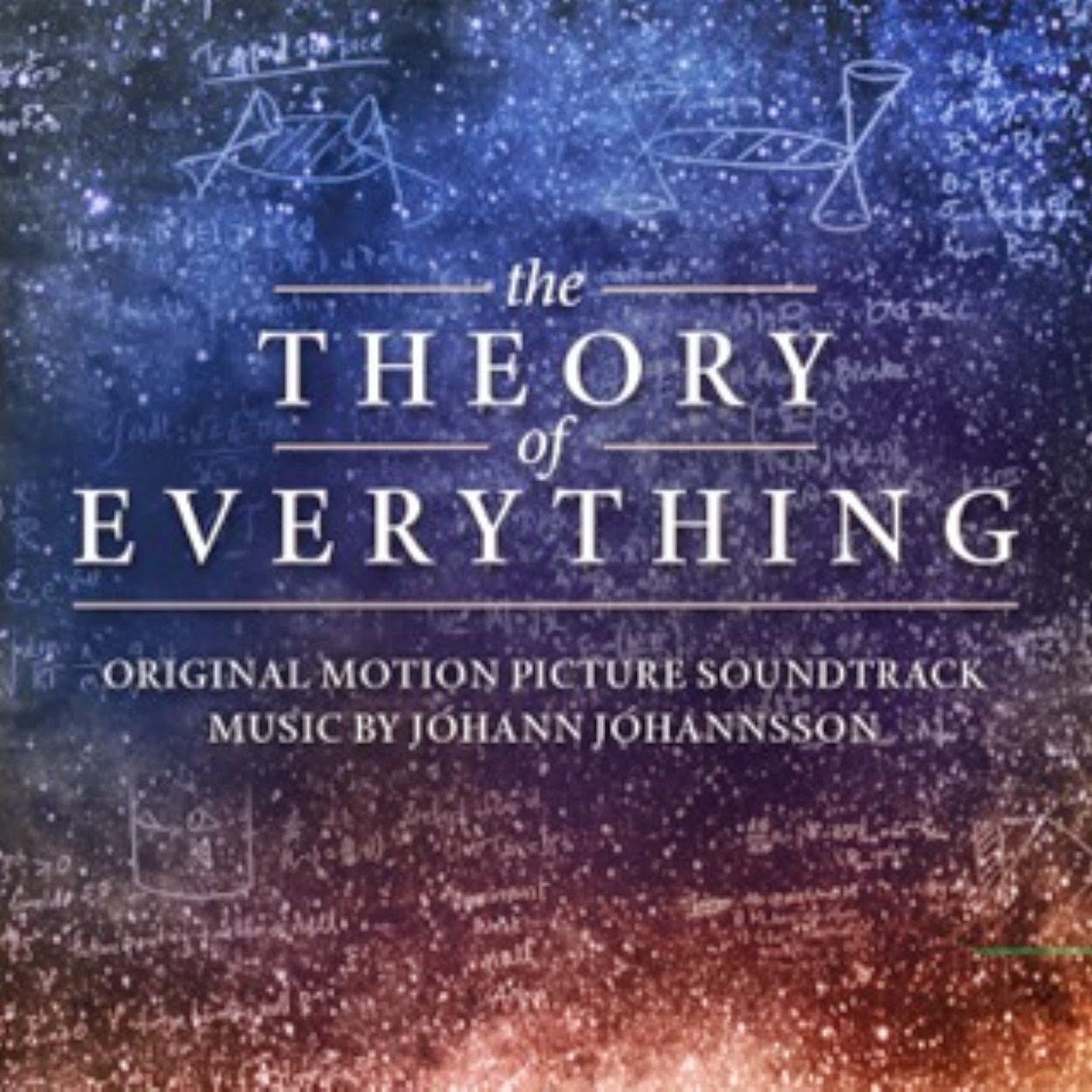 I also watched The Theory of Everything.  I have an indirect connection to this movie as well.  My boyfriend’s father died from ALS a few years back and while I never knew him, I know the impact of the loss for him and his family.  Again, the progression of the disease is portrayed amazingly well by Eddie Redmayne but it’s tough to watch.  I found it less brutal than Still Alice because the story and the mind of Stephen Hawking is captivating and he has not had the same experience as some with ALS as he is 73 years old.  The movie is complex and I think overall it was great.  It will certainly draw emotions from you.  I give it an A. 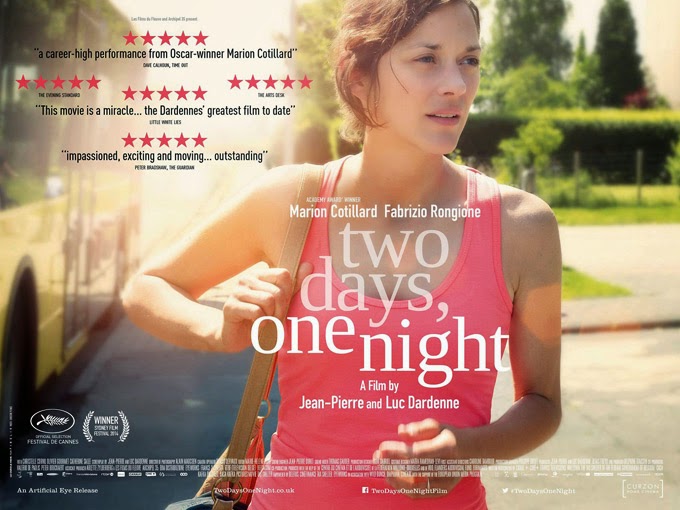 Marion Cotillard is nominated for best actress in Two Days, One Night.  I suppose it’s a fair nomination but I found the movie underwhelming overall.  It is about a woman struggling to keep her job after she has taken a leave for issues surrounding depression.  She has one weekend to convince each co-worker to vote for her to stay.  If they say yes, they lose their bonus money.  The concept is fine and she’s good in it but I thought the movie was really slow.  It was super redundant and the plot was a bit flat.  I give it a B-. 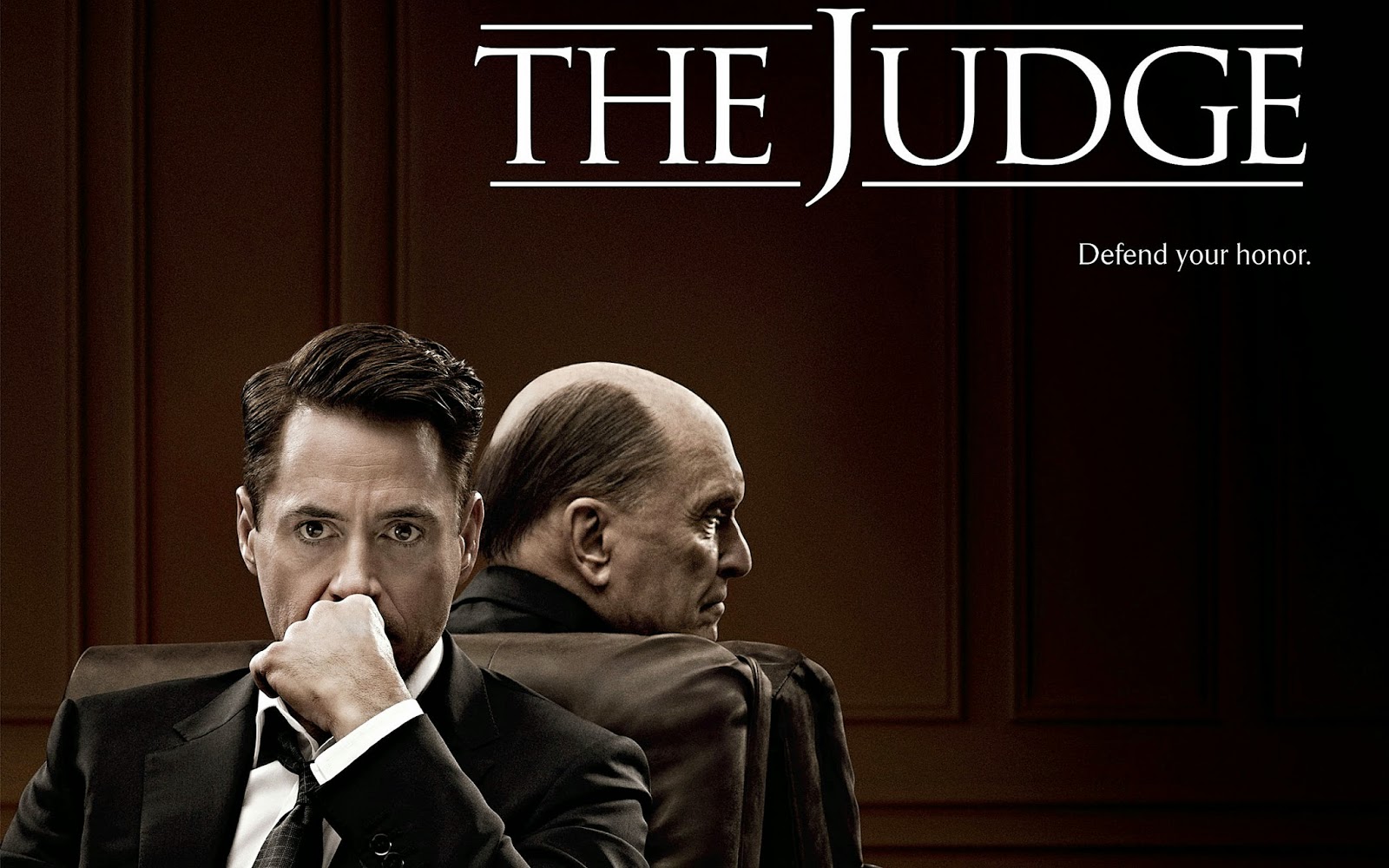 Finally, I watched The Judge last night.  The only nomination for this is Robert Duvall for supporting actor.  I support this nomination and I also think it’s fair it wasn’t nominated for anything else.  The movie is fairly good.  I’d watch it again.  There are some tender moments between father and son but a few of dialogue lines seemed a bit forced.  I would give the movie as a whole an A-.  I love Robert Downey Jr. so I’d watch it again just to see him.

Like I said I still have one movie left (Inherent Vice) so I will probably post again on Thursday if you're interested in that sort of thing.

Sunday is going to be an awesome day.  I'm going to see Book of Mormon with my mom in Birmingham and then the Oscars are Sunday night.  Jordan and I are going to stuff our face and have a blast.  Hopefully the scale will start my day off right on Sunday morning.  Y'all have a good week!
Posted by Heather Wyatt